Existential Star Wars (In French) from my son..

Did Christ engage in black and white thinking?

Posted by Supertradmum
During these political times, I have been pondering the idea of black and white thinking. This led me to look at the words of Christ, Who does seem to use black and white rhetoric. Can we make a distinction between black and white rhetoric and black and white thinking? It was extremely important to the Jews that Christ spoke to the Pharisees and Sadducee in absolutes, as that was part of their rhetorical style of teaching. Ron Paul says things which alienate the larger part of the Republican structure, but most people who have come over to him like his way of speaking in black and white terms--the straight talker, like George Bush, or Davy Crockett. Some people who would never vote for him demand that his language be seen as raising issues in absolute terms in order for those issues to be taken seriously. If you make a black and white statement, people may tend to respect you even if they do not agree with you. You would seem like a honest person.

As a teacher, I moved away from such statements and moved into the Socratic Method, which is based on questions, an approach which Christ also used as part of the Rabbinic way of teaching.

But, black and white rhetoric is not the same as black and white thinking. We live mostly in areas of tepid grays. Such b and w thinking is the fallacy of the false dilemma. We must say that as human beings our truth is limited by our perceptions, and our checks and balances, which is Revelation and Tradition in the Catholic Church, help us understand and clarify the grays. These "checks and balances" are one reason I am Catholic. We have a reasonable religion, unlike some based on fear or emotion, which allows for discussion and understanding our Faith to a point.

One of the reasons there are such divisions in the American culture is because of black and white thinking-I saw this last year in the disputes in Wisconsin regarding the budget repair bill. Even such movements as the occupy and anarchist movements are begun and inflamed by black and white thinking. So, how as Catholics do we fall into the fallacy of false dilemma? Christ did say "He that is not with me, is against me: and he that gathereth not with me, scattereth."Matthew 12:30 But, Christ, because He is the Way, the Truth and the Life does offer only one alternative to salvation. He is God.


What we must do is put on the Mind of Christ. Too many Christians do not think like Christians. They think like pagans or secularists or practical atheists. Americans talk and think big, compared to older cultures, which appreciate subtlety in rhetoric. This is an art, but how is big talk or subtle talk in keeping with the Mind of Christ? We must communicate slowly and carefully so that we can understand the thought of those whom we are evangelizing, or even convincing to our political position. Have we lost the art of communicating the Mind of Christ, and if we are not thinking like Christ, can we communicate the Good News? In good Socratic Method, I am asking more questions here than answering.


I think the answer is simply becoming like Christ, living in and with Christ, allowing Him, as Ignatius states, to take all one's memory, understanding, and will. Only in the mystery of allowing the Indwelling of the Holy Spirit purifying the mind and imagination, the memory, and the will, do we grow in holiness. The dying of self, or to self, allows us to think and act like Christ. Then, the dilemma is solved. We can speak in black and white terms, but think without judging. This does not mean that we tolerate evil, but that we love beyond the actions of individuals. Therefore, we can communicate the Mind of Christ. To be continued..as one cannot confuse this Love with tolerating any type of evil. "But I have against thee a few things: because thou sufferest the woman Jezabel, who calleth herself a prophetess, to teach, and to seduce my servants, to commit fornication, and to eat of things sacrificed to idols." Revelations 2:20

OK, one good thing out of the English fishwrap

The English Ordinariate needs money. The great sacrifices which these new priests have endured may include the loss of housing, pensions, and other means of income for themselves and if married, for their wives and children. I add my space to the appeal. These men are dedicated, hard-working priests, deserving our support.

Please respond, if you can.

Two for one and how the Present Potus is not really elitist..

Posted by Supertradmum
Among my younger friends, in light of the Iowa Caucus, which not only proved to be extremely interesting, but a lesson in grass-roots democracy, there is a continual discussion on the Catholic Traddies position on monarchies. As there are blogs dedicated to this subject, I am not going explain the Church's position, as much as extrapolate on the death of elitism in the United States, partly as a logical consequence of the democratic process, but also as a sign of the death of the West.

Elitism is the idea that some people, whether by wealth, or birth, or education, or just plain merit, are called to serve in governments, education, businesses and so on. In my generation, where private schools had tracks and when it was considered normal to follow in the footsteps of ancestors who served the public, elitism was a word rarely heard. Leadership training was "in" and I got it, as did my peers, from the nuns, priests, and laypeople who were our teachers. If we were in private schools and went to Catholic colleges and universities, we were expected and trained to not only be grateful for all the benefits we received, but to give back to society. In a sense, the ideal of noblesse oblige was part of the Catholic ethos, as we knew we had the Truth and needed to share it in the marketplace. The Oxford Dictionary defines this phrase in part, as privilege entails to responsibility.


Now, as sons and daughters of the King of All, and as sons and daughters of the Queen of Heaven, we had a sense of responsibility to spread the Good News decades before the "New Evangelization". That this did not happen can be the subject of another post, but the point was that we were called to convert, in any manner which our individuals careers or vocations demanded. We were not to waste time, but were trained to be good stewards of time, money, education, etc.


What has happened in the States is that the "meritocracy" ha,s created the a new elitist class of those who have  risen to the top by their own efforts or "luck" BUT without the sense of noblesse oblige. In other words,(and those who know me, and my students from the past, understand that I have this bee-in-my-bonnet about Post Modernists "heretics", whether formal or material, and their narcissistic take-over of politics in the States at all levels) the "me" crowd took over. A narcissist by definition cannot connect with noblesse oblige, as the happy world revolves around him. (This blog never has inclusive language.) "Bob's World" or "Charlotte's World" is recreated continually, and the society accepts this more and more as the norm. This is one of the reasons why the "gay agenda" has been so successful in America and elsewhere, as most people do not either see the idolatry of self, which is narcissism, or they do not know how to deal with it. And, it is so much easier to stay in the toddler stage of life rather than grow up. I believe that because America is still an "adolescent" nation, less than 250 years old, that this absorption of narcissism at all levels of the culture seems normal.


If anyone wants further reading, just go back to de Tocqueville, who I taught for years, and is a prophet for our times. Here is the problem of today's elitist class-it is made out of money. Here is our friend, de Tocqueville--What is most important for democracy is not that great fortunes should not exist, but that great fortunes should not remain in the same hands. In that way there are rich men, but they do not form a class.

Why, you ponder, why should we not have leaders from the new financial classes rather than a hereditary monarchy or hereditary nobility? The new elites lack noblesse oblige. They have been trained to make money, be successful, "be all you can be" without the sense of service. One of my favourite holy men is Blessed Karl of Austria, who gave his life as an offering to God for his country. The cause for his wife, Empress Zita, was opened on December 10th, 2009.

I am not denying that history has not seen truly evil, nasty and selfish lords and ladies. What I am elucidating is the fact that there was in the West a long tradition of service connected to the monarchies and aristocracies. Russia was converted by the Great Vladimir, for example, despite the fact that his own brothers were each a "piece of work" to say the least.That this noblesse oblige was passed down to the "lower classes" of Catholics in the past, who understood that all the grace and benefits of being Catholic needed to be shared, was a marvel of Catholic, elitist education. Bring it back. Down with narcissistic Post-Modernism.

Email ThisBlogThis!Share to TwitterShare to FacebookShare to Pinterest
Labels: decline of the West, Politics, post-modernism

Hello and Thanks for All the Fish 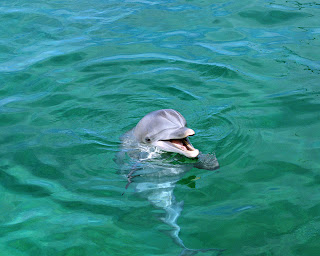 Welcome back to my blog. I was active for several years in 2007-2009 and now I am back. I say "Thanks for all the fish" because I feel like I am on a different planet than when I was blogging not that long ago. At that time, I was living in Ventura, Ca., and then, Iowa. Now I am in Europe. The viewpoint is refreshingly and disturbingly different, of course.

If I am going to help all of us understand the political or religious events around the world, pertaining to the Traditional Mass, the Post-Vatican II and Post-Modernist movements, there is no place better than sitting in a small room in Ireland or on a veranda in Malta overlooking the detritus of Western Civilization as it crumbles before my eyes.

I hope my former students and colleagues will find this blog useful. If not, I know that there are hundreds of fantastic blogs out in the blogosphere to help us all maintain some sanity. May God bless us all and may the patron saint of the Internet, St. Isidore of Seville, who, as patron, is also a complicated topic, bless all my commentators.

Email ThisBlogThis!Share to TwitterShare to FacebookShare to Pinterest
Labels: Goodbye and thanks for all the fish........., Lay down thy sword and pick up the pen
Newer Posts Home
Subscribe to: Posts (Atom)