What happened to the Christians in Scotland?

SPUC Safe at School has condemned calls from Scottish health boards for parents to hand over their children's moral education to the state.

Safe at School said that Scotland's largest NHS boards want nothing less than to brainwash every Scottish child into accepting same-sex marriage, by setting up children to overrule their parents.

"The NHS is demanding that parents hand over their children to state indoctrination. I believe that Scottish parents will be quick to see that this is about using innocent children as pawns to promote same-sex marriage. We will be organising meetings in Scotland to empower parents to protect their own children."


Part four and more on St. John of Avila

St. John of Avila writes to a lady on what holiness is. Obviously, he was aware of those stages of perfection, and so inspired St. Teresa of Avila, to whom he wrote as well. He is summarizing all three stages here, purification, illumination, and unity in love, as perfect charity comes in unity.

Here is the short letter.


St, John of Avila, part three of the series on the Doctors of the Church


For priests, there is a wonderful letter in this book, Letters of Blessed John of Avila, found here, on preparation for Mass. Here is only one page on that selection: I like the phrase, "Retire into the secrecy of your own heart"...there is so much here. BTW, a fellow blogger of mine, Reluctant Sinner, has a good post on St. John of Avila at this site.

For the laity today, I copy a section on his comments on persecution.

John of Avila, Doctor of the Church Repost One 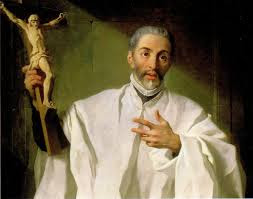 This is the second in a long series I am going to do here on the Doctors of the Church. Highlighting their spirituality will cover both categories of the seeking of perfection and the lives of the saints. Enjoy.

Last year, the Pope made St. John of Avila a doctor of the Church. Many people do not know him. His feast day, which I celebrated in Ireland, is on December 14th.

Here is a snippet from the Mass where the Pope made this declaration along with St. Hildegard of Bingen.

At this point, let us pause for a moment to appreciate the two saints who today have been added to the elect number of Doctors of the Church. Saint John of Avila lived in the sixteenth century. A profound expert on the sacred Scriptures, he was gifted with an ardent missionary spirit. He knew how to penetrate in a uniquely profound way the mysteries of the redemption worked by Christ for humanity. A man of God, he united constant prayer to apostolic action. He dedicated himself to preaching and to the more frequent practice of the sacraments, concentrating his commitment on improving the formation of candidates for the priesthood, of religious and of lay people, with a view to a fruitful reform of the Church.

Saint Hildegard of Bingen, an important female figure of the twelfth century, offered her precious contribution to the growth of the Church of her time, employing the gifts received from God and showing herself to be a woman of brilliant intelligence, deep sensitivity and recognized spiritual authority. The Lord granted her a prophetic spirit and fervent capacity to discern the signs of the times. Hildegard nurtured an evident love of creation, and was learned in medicine, poetry and music. Above all, she maintained a great and faithful love for Christ and his Church.
http://www.vatican.va/holy_father/benedict_xvi/homilies/2012/documents/hf_ben-xvi_hom_20121007_apertura-sinodo_en.html

St. John was going to be a missionary, but was asked to stay and help restore Catholicism in Andalusia. He is important to me as he wrote on Christian perfection, which is a theme of this blog.

His sermons and writings influenced SS. John of the Cross, Teresa of Avila, Francis Borgia and others.

.
I would like to have a copy of "Audi Fili", a perfect book for Lent,  English translation, 1620) and "Spiritual Letters"English translation, 1631, London and Stanbrook Abbey, 1904, if someone has those laying about.....and not using them. I think of all the books in the libraries of monasteries being ignored, simply because those coming in are so few, or that they need the basics of the Catechism, the milk and not the meat, yet.

The Education Select Committee of the House of Commons has launched an inquiry into personal, social and health education (PSHE) in schools. PSHE covers a number of topics such as drug education, healthy eating and so on. Sex and relationship education (SRE) is also covered in this topic.

We are very concerned that this inquiry will be used to make sex education a compulsory schools subject. This would mean that children as young as five years old would have to learn about sexual matters. Parents would be unable to protect their children from inappropriate teaching.

It is absolutely vital that there is an overwhelming response from parents, grandparents, teachers, clergy and all concerned citizens saying "no" to compulsory sex education. Compulsory sex education will sever parents from the moral upbringing of their children. And the innocence of children will be wiped out by ever more sexual content in the classroom.

Every school will be affected by this. Every child deserves to be protected.

P.S. You may have seen this frightening report today by The Telegraph:
"NHS chiefs tell ministers: Change sex education lessons to make all pupils learn about gay marriage"

Posted by Supertradmum
I am very excited about a new book I am borrowing-For Altar and Throne: The Rising of the Vendee by Michael Davies, one of my heroes.

God willing that I can continue blogging, I shall share the details of the book with you all. 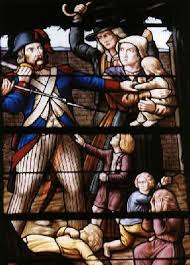 Posted by Supertradmum
One of the things wrong with continually looking at and complaining about the abuses in the Church is that it focuses our attention on evil. We must focus our attention of Good, Who Is God.

Focusing on Christ is the job of the Christian. When we focus on Christ, even in days of suffering, we are practicing the virtues of faith, hope and love. Hope, especially, is honed in suffering.

Hope is believing in what we do not see.

If we cannot see success or even goodness in a situation, we can hope that good will come out of evil.

By constantly looking at evil, we become despondent and can even lose our way on the road to perfection.

By looking at the Beloved, we become like Him we adore.

By concentrating on evil, we glorify evil rather than good.

The center of our lives should be the Good.

5 Conduct yourselves wisely toward outsiders, making the most of the time.[a] 6 Let your speech always be gracious, seasoned with salt, so that you may know how you ought to answer everyone.

Posted by Supertradmum
A computer guy has been helping me with a series of viruses for two days now. Some have come back. Please pray I can get all these out, or I may have to switch the blog to another place. I do not have the money to buy something sophisticated and am not sure what to do.

The virus is connected to Google and Chrome. Of course, this is a google blog. Pray I can save all and if I have to start anew, that I would get the help I need.

Please, please pray that my Google accounts have not be infected.

All part of spiritual warfare, I am sure.

Pray for me that I can continue blogging.

Also, pray for me to be able to get a Mac.