Posted by Supertradmum
HyVee has it. In the frozen organic section.

Read, but remember it is from La Stampa


Barbara Brown Taylor is one of the most popular “spiritual” writers of the day. She was ordained as an Episcopalian priestess, but for reasons concerning her own popularity, she and the Episcopalians parted company some time ago.

The reason she is a concern for those seeking peace and perfection is that she writes about what she calls the Dark Night. However, one must make a distinction between what I call the highjacking of this very Catholic mystical term and ’s use of the phrase.

First of all, for those of you who have read the over 600 posts on this blog regarding the way to perfection and union with God, you know that the first step to holiness is complete orthodoxy. Unorthodoxy keeps people from the graces of perfection.

Why? To be in union with Christ demands not only a breaking away from sin, and a purging of sin, but the “putting on the Mind of Christ”. To think like Christ, the Second Person of the Blessed Trinity one must think like His Own Bride, the Church.

Only in the Teaching and Tradition of the Church do we find the Mind of God. The sins which need to be purged come from self-love and self-will. Part of accepting the magnificent teaching of the Church is dying to self, the ideas one’s has about morality, doctrines, dogmas.

To insist on accepting ideas of others who have departed from the Tradition and Teaching Magisterium is a sign of rebellion and pride.

Without orthodoxy, one opens one’s heart, soul and mind to other spiritual forces, namely, demons and listens to the siren song of deceit.

I cannot judge Ms. Taylor, but I can judge her ideas, and a supposed “dark night” which is the same in Buddhism, or other man-made “religions”.  Objectively, she is confusing the way of ascetism, a long and honored tradition in all “religions” with the real Dark Night.

The real Dark Night centers on one’s relationship with Christ, and not merely the ascetic appeal of death to material things or distractions.

All humans benefit from denial and dark times, but only in the true Dark Night can one be discovered by the Bridegroom by Christ.

Who discovers one is the darkness which is not centered on Christ and His Truth, only found in fullness in the Catholic Church is, frankly, frightening.

Unless one is orthodox, one is open to the deceit of the most intelligent of beings, the demons who fake spirituality, who counterfeit real holiness and real religious experiences.

If on is not orthodox, one is not even on the way to perfection, as one is following a path which has forked off, away from the glory of the Catholic Church.

There is no such thing as truth outside of Christ, who told us “I am the Way, the Truth and the Life”

There is no other way to union with God except through Christ and His Church. Anything else is a false and stunted journey, based on the ideas of men and not the Mind of Christ.

Once more, I repeat, how do we know the Mind of Christ? The is only one way, through the beauty of the Catholic Church

The Two Brothers of Malta-Ending


In the morning of August 9th, the second bombardment of Birgu began. The area was already almost destroyed by the cannons but the fort held out.  Birgu was almost invaded but a fluke of history caused the Turks to withdraw. Again, some strange power was at work stopping the advancement against Christianity. Birgu and Michael did not succumb with the help of the charismatic Vallette, who had Frederico and his men by his side. The people proved to be some of the bravest on the island.

The inhabitants fought well and stopped another attempt at the end of the month. Vallette sensed that the invaders were losing their will to win. However, the siege continued. The Turks had, at this point, before the beginning of September, lost over 9,000 men. 6,100 Maltese had fought against 48,000 men from the East and had not given in. The Turks attempted to take over the holy city of , but decide to withdraw in another surprise retreat. Mdina had little artillery, so the entire withdrawal of the attack seemed a spiritual mystery to the Maltese. Many of the Turks died of diseases adding to the number of dead, making the count 10,000. The siege moved slowly to an end.

On the vigil of the Feast of the Birthday of Our Lady, September 7th, the famous Don Garcia appeared with his men in ’s Bay, clearing the area with 8,000 reinforcements. In a rage which could not be controlled, the Spanish soldiers swept through the area, including Gozo, and freed from the invaders. The Turks left Malta on September 11th, a day to be later remembered for another victory, as the Feast of the Holy Name of Mary, celebrating, as Catholics do today, the victory at the Battle for Vienna, a battle fought over two days, the 11th and 12th in 1683.

Soon the people had food sent to them from Spain, Italy, and Sicily. Sadly, many thousands died, in the fighting or by starvation. There graves, unlike like those of the Knights, lie unmarked, under the rocky soil of Malta.

The Maltese understood to whom they owed this victory, creating lovely churches in honor of Our Lady. The glory of revealed the beauty and love of the Knights for their country, their Lady, and their God.

Immanuel finally went back to Gozo to resurrect his father’s estates, and succeeded in being accepted into the Order, after training as a Knight, on Christmas Day, 1601. He was remembered always for his kindness and meekness.  Vallette began to build the most advanced fortified city in the world, but died before seeing it completed. Frederico received permission from the Grand Master after the Siege to enter the monastery in Mdina, where he lived to be a very old monk, writing this memory of the Siege of Malta from the perspective of two brothers-the two brothers of . When Frederico died, the monks opened the tomb of Tomas and Isabella to add Frederico’s body to the dust. There, they found one white flower, a small white rose, preserved, as if it had been placed there yesterday by a gentle hand.

There is another story here, but it will have to wait a bit....

I know a couple

Posted by Supertradmum
...who have been married for 66 years and still go out several times a week for coffee and a talk.

That is love. When they were married in January of 1948, they had poinsettas on the altar. I love poinsettias. 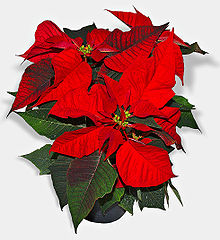