Posted by Supertradmum
Without priests, the Incarnate Christ is not in our midst.

St. Bernard on the Magnificat-a short meditation for Advent 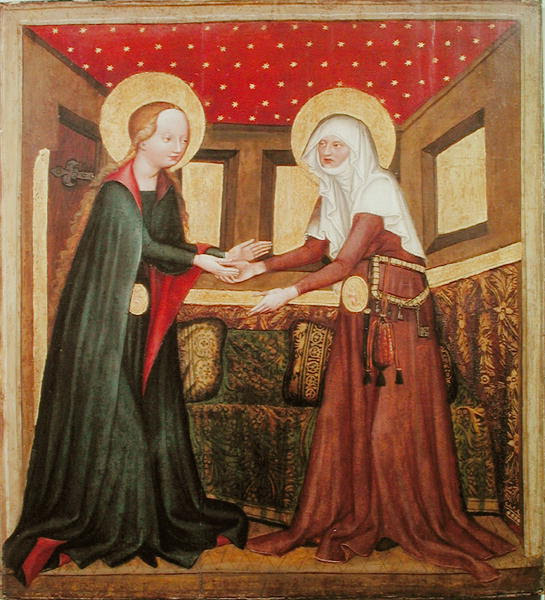 The great mystic and theologian quotes Mary in her Magnificat: "He that is mighty has done great things for me." Bernard says that all Catholics should ask for those graces. What graces?

The great things to which Mary refers are graces of perfection. Mary realizes the singular perfection of her state and the immensity of her role in becoming the Mother of God.

She is not merely a very young, pregnant woman given the honour of bearing the Messiah. She is bearing God-the Theotokos, the God-Bearer, whose feast is coming up on January 1st in America.

This woman knows that God is growing as a God-Man within her. This is the Greatest Thing. Her own perfection and sinlessness are great works as well. She had done nothing but say yes. But, the great work begun at her own Immaculate Conception. What miracles are being done in this time of history?

She is not confused. She is not proud. She is honest and humble. God has done all the great things.

Let us, as St. Bernard suggests, ask for all the graces of perfection that God wished to give to us.

Let that be our Christmas prayer.

Thoughts on March 25th in the week before Christmas No one writes about the Blessed Virgin like the great Doctor of the Church, St. Bernard. In this work, "On the Visions of God", he writes concerning Mary and the soul who desires to be a bride of Christ: as in the Song of Songs, "the heart of  husband trusteth in her." God trusted Mary and through her, all of us.

Bernard continues: "...and amongst all His possessions there is  nothing which He thinks ought to be concealed from her whom He redeemed from poverty, whom He has found faithful under trail, and whom
He now embraces as worthy of His love."

And here is the crucial point: "Even the Lord's Mother herself lived in the Shadow of faith, for to her it was said, 'And blessed art thou, that hast believed.' She had also a shadow from the Body of Christ, as the Angel implied. For surely there must be a difference between walking by faith and walking by vision. We are all in the Shadow of Faith until we are strengthened to see the light, when he told her 'And the power of the Most High shall overshadow thee' For that is not slight shadow which is thrown by the power of the Most High. And truly there was power in the Flesh of Christ which overshadowed the Virgin, so that, by means of the intervening screen of this vivifying Body, she might be enabled to endure the presence of the Divine Majesty and bear the splendours of the Light inaccessible, a thing otherwise quite impossible to a mortal woman."

The Bride of Christ, as prophesied and honoured in the Song of Songs, calls her Husband the shepherd.  And, so He is, "the Good Shepherd, Who gives His life for His sheep."

Thank you, God, for St. Bernard.