Referring Back to The Heresies Series--Demonic Assault on The Church

Posted by Supertradmum
First, there was an attack on the Liturgy.

Then, there was an attack on the priesthood.

After that, there was an attack on the sacraments, especially marriage and the Eucharist.

Now, there is an attack on grace and the Church's teaching on predilection.

Now, there is also an attack on the entire set of truths about the Fall of Man, Original Sin and even the Redemption of Christ.

Next, there will be an attack on the very nature of God's relationship to humans.

Are you all paying attention?

My series is a resource. If you have questions, ask now.

Too many priests are full of false optimism.

Thoughts on my own birthday

Posted by Supertradmum
When one is young, one does not think of age. At least I did not. When one is middle-aged, one begins to think of age, sometimes. I guess according to American standards, I am still middle-aged, but approaching the end of that category.

Where old age begins is an interesting question. I do not feel old.

My parents, who have been married 67 years today, are old. Dad is 91 and Mom 85 for a few more days, when she turns 86. Now, I think it is fair to say that they are old. They do not act old and spend many days having lunch at Panera's. They still live in the family home and are extremely independent.

I was born on their first wedding anniversary, thereby spoiling a good time. I was a month early, as most of us were in our family.  By the way, if one would buy 1949 Moet & Chandon Brut to celebrate my parent's anniversary and my birthday, one would have to go to Holland and put out about 400 Euros for the bottle. A Bollinger from the same year is much less expensive.

For my life, I am truly grateful. God has and is very good to me. My life has not been what I had anticipated or planned. I thought I would be married for a long time, continue my career as a college instructor in a domestic, stable life, taking care of my rose garden, creating a bird sanctuary, writing the great novel still in my head, writing more poetry, writing more dramas. painting with oils, acrylics and water colors and cooking for anyone who walked through the door. I was told I was not medically able to have children because of serious health issues, but God gave me a wonderful son, a gift almost miraculous, and for whom I am very grateful. Children change our lives for the better, absolutely. He changed my life.

Never did I intend to stay in the Midwest, as most Iowans leave after getting one of the best educations in the world, whether Catholic or secular. Emigration from Iowa is well-known. Having said that, two of my siblings live in state and one, like me, does not.

I am the oldest of eight, four of whom died. My sister Beth Ann, and an unnamed, but baptized boy, are in heaven. The other two are in God's mercy. Three brothers, all smarter and way more successful than I am, are younger, but we are all Boomers.

As I think of my life, I am happy in my friends. God has been generous in giving me wonderful Catholic friends of all ages, and wonderful non-Catholic friends of all ages. I treasure them all even though we may live thousands of miles apart. My friends are my family. Most of my friends are either much older than I am or much younger, which is interesting. I have only two friends about my age.

As those ancestors of mine lived to be very old, in their mid to late nineties. I have a good chance of being ancient as well. But, perhaps not. God alone knows our day of leaving this earth, and all we can do is be ready.

Today, I want to thank my Dear Readers for enriching my life in so many ways. I am more intelligent, happier, stronger, and hopefully, spiritually better, because of YOU.

When I started this blog, it was for a handful of students. Little did I imagine that readers from most countries in the world would find this blog.

Thank you! You deserve a piece of cake, but as I am not having any, just pretend. At home, we always got to choose our dessert for our birthday, and I always chose Boston Cream Pie, which my mother makes like a chef. So, here is our virtual dessert for the day.

And, happy feast of St. Genevieve, after whom I was almost named, but (imo, thank God), was not.

I cannot imagine being SupertradGen, but I do love France. St. Genevieve lived to be old, somewhere between 79 and 93. Her prayers saved Paris from Attila the Hun. Very cool.

My birthday pressie to myself is to turn on the electric-meter-heater-monster.

I share a birthday with J. R. R. Tolkien, Mel Gibson, Pola Negri, Sergio Leone, Stephen Stills, Michael Schumacher, (God heal him), and various others. There are many saints whose feast day is today, mostly martyrs, bishops, abbots, virgins, and one, Daniel of Padua, patron saint of women whose husbands are away at war-something to keep in mind in these troubled times. Several of the saints for January 3rd are either French or ended up in France, which is where I shall be sometime this month in order to celebrate Robbie Burns Night with some ex-pats! Of course, I shall tell you all about it, and about the haggis, which I actually like to eat.  I have made Cock-a-leekie soup many times myself, and I am looking forward to listening to the addressing of the haggis. Here is the text, translated, just in case you cannot wait until January 25th.

Fair and full is your honest, jolly face,
Great chieftain of the sausage race!
Above them all you take your place,
Stomach, tripe, or intestines:
Well are you worthy of a grace
As long as my arm.
The groaning trencher there you fill,
Your buttocks like a distant hill,
Your pin would help to mend a mill
In time of need,
While through your pores the dews distill
Like amber bead.
His knife see rustic Labour wipe,
And cut you up with ready slight,
Trenching your gushing entrails bright,
Like any ditch;
And then, O what a glorious sight,
Warm steaming, rich!
Then spoon for spoon, the stretch and strive:
Devil take the hindmost, on they drive,
Till all their well swollen bellies by-and-by
Are bent like drums;
Then old head of the table, most like to burst,
'The grace!' hums.
Is there that over his French ragout,
Or olio that would sicken a sow,
Or fricassee would make her vomit
With perfect disgust,
Looks down with sneering, scornful view
On such a dinner?
Poor devil! see him over his trash,
As feeble as a withered rush,
His thin legs a good whip-lash,
His fist a nut;
Through bloody flood or field to dash,
O how unfit.
But mark the Rustic, haggis-fed,
The trembling earth resounds his tread,
Clap in his ample fist a blade,
He'll make it whistle;
And legs, and arms, and heads will cut off
Like the heads of thistles.
You powers, who make mankind your care,
And dish them out their bill of fare,
Old Scotland wants no watery stuff,
That splashes in small wooden dishes;
But if you wish her grateful prayer,
Give her [Scotland] a Haggis!

29 If you know that he is righteous, you may be sure that everyone who does right has been born of him.

3 1 See what love the Father has given us, that we should be called children of God; and that is what we are. The reason the world does not know us is that it did not know him. 2 Beloved, we are God’s children now; what we will be has not yet been revealed. What we do know is this: when he is revealed, we will be like him, for we will see him as he is. 3 And all who have this hope in him purify themselves, just as he is pure.
4 Everyone who commits sin is guilty of lawlessness; sin is lawlessness. 5 You know that he was revealed to take away sins, and in him there is no sin. 6 No one who abides in him sins; no one who sins has either seen him or known him.

Email ThisBlogThis!Share to TwitterShare to FacebookShare to Pinterest
Labels: Holy Name of Jesus

The First Shedding of The Blood of The Son of God

Christ was innocent of sin and did not have to shed blood for us. This is the first time, but, as we know, not the last.

Let us pause today and thank Jesus for coming to save us through His Blood.

Email ThisBlogThis!Share to TwitterShare to FacebookShare to Pinterest
Labels: Holy Name of Jesus 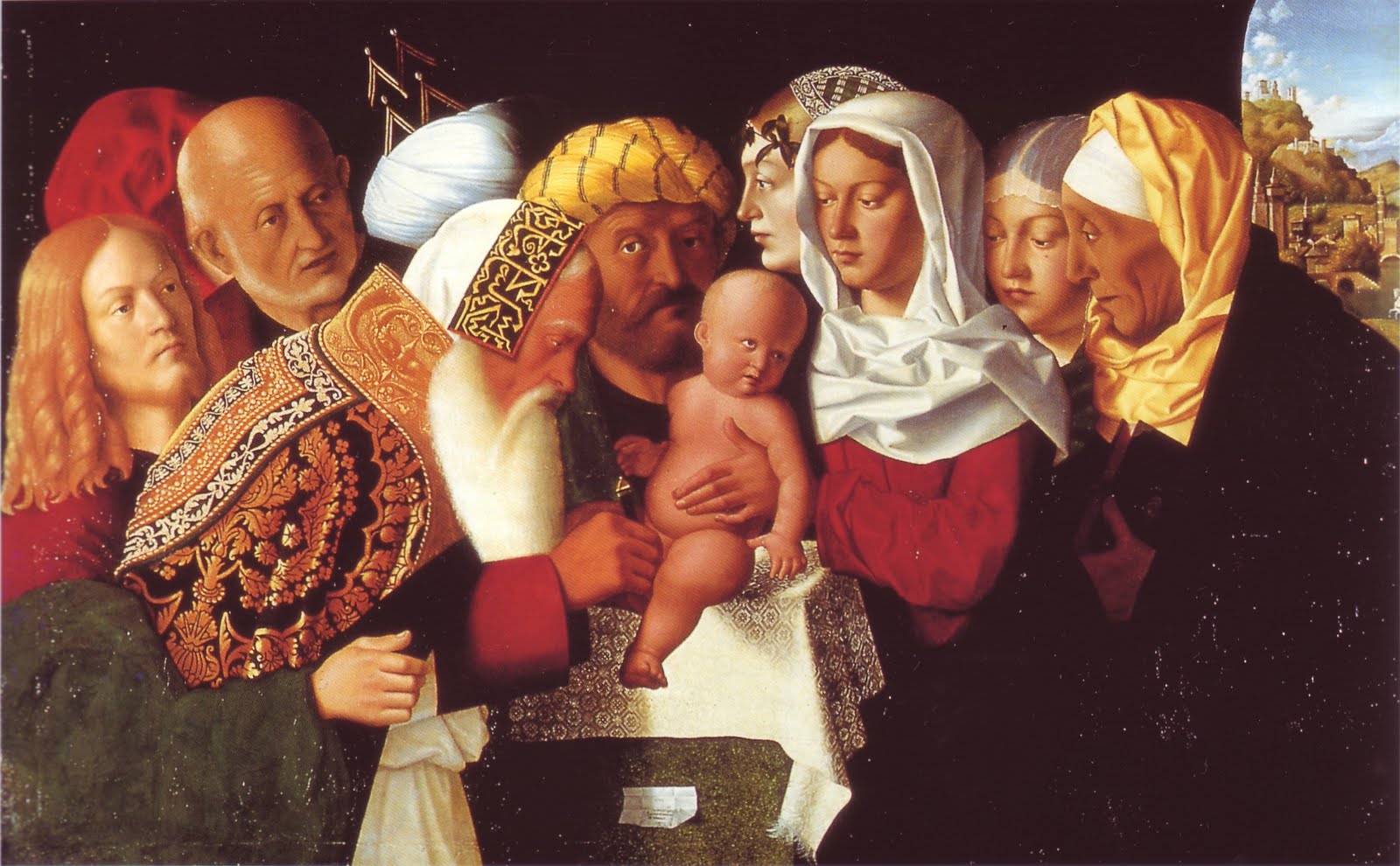 Litany of the Holy Name of Jesus