Three Catholic Priests in England Told Me They Never Heard of These from the CDF--Why?

As conforming to Pope John Paul II's Apostolic Letter Motu ProprioAd Tuendam Fidem, this Profession of Faith and Oath of Fidelitysupercedes the Profession and Oath of 1989.

I. PROFESSION OF FAITH
I, N., with firm faith believe and profess everything that is contained in the Symbol of faith: namely:
I believe in one God, the Father, the Almighty, maker of heaven and earth, of all that is seen and unseen. I believe in one Lord, Jesus Christ, the only Son of God, eternally begotten of the Father, God from God, Light from Light, true God from true God, begotten not made, one in Being with the Father. Through him all things were made. For us men and for our salvation, he came down from heaven: by the power of the Holy Spirit he became incarnate of the Virgin Mary, and became man. For our sake he was crucified under Pontius Pilate; he suffered death and was buried. On the third day he rose again in accordance with the Scriptures; he ascended into heaven and is seated at the right hand of the Father. He will come again in glory to judge the living and the dead, and his kingdom will have no end. I believe in the Holy Spirit, the Lord, the giver of life, who proceeds from the Father and the Son. With the Father and the Son he is worshiped and glorified. He has spoken through the Prophets. I believe in one holy catholic and apostolic Church. I acknowledge one baptism for the forgiveness of sins. I look for the resurrection of the dead, and the life of the world to come. Amen.
With firm faith, I also believe everything contained in the Word of God, whether written or handed down in Tradition, which the Church, either by a solemn judgement or by the ordinary and universal Magisterium, sets forth to be believed as divinely revealed.
I also firmly accept and hold each and everything definitively proposed by the Church regarding teaching on faith and morals.
Moreover, I adhere with religious submission of will and intellect to the teachings which either the Roman pontiff or the College of Bishops enunciate when they exercise their authentic Magisterium, even if they do not intend to proclaim these teachings by a definitive act.

II. OATH OF FIDELITY ON ASSUMING AN OFFICE TO BE EXERCISED IN THE NAME OF THE CHURCH
(Formula to be used by the Christian faithful mentioned in Canon 833, nn. 5-8)
I, N., in assuming the office of __________, promise that in my words and in my actions I shall always preserve communion with the Catholic Church.

One of the most ignored apostolic letters ever.....Ex Corde Ecclesiae

Posted by Supertradmum
A reminder of all Catholics to re-read Ex Corde Ecclesiae and lament the fact that in most countries, this was ignored by the hierarchy. Have you ever heard a talk or a sermon on this in the past 22 years?

On Neo-Gothic and Bayswater 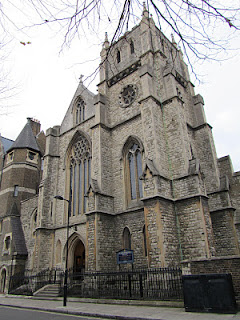 I have just discovered a church in London I have never visited before-Our Lady of the Angels in Bayswater. It is amazing and was originally part of the home of the Oblates of St. Charles Borromeo, a semi-monastic group of priests, who ministered here. The history may be found at this link, but here below is a snippet. I want to concentrate on the architecture and windows of the Church, which strike one as more English than many other churches and of course, is part of the great Victorian revival of Neo-Gothic, very Puginesque and very nationalistic in feeling. The architecture, and decorations are absolutely English, with odd accretions of immigrant additions, such as less than appealing statues of artistic dubiousness. For some reason, I like original Gothic, but not Neo. Neo always seems pretentious to me and not as organic as the original medieval variations, such as Henry VII's Chapel in Westminster. I think I just like original English Perpendicular Gothic better than other permutations. Part of the problem with this Church is the lack of  natural light. One does not get the "wow" factor of the Perpendicular style, as in York, Gloucester, Bath Abbey, and of course, one of my favorites, where I was last week, Sherborne Abbey, seen below on an earlier posting. There is a simplicity of line in the Perpendicular lacking in the Decorated style of Gothic. I also think the golden Hamstone or the warm stones used in the southwest are superior in color to the grays of this Church. How picky I am! But, we all have our favorites when it comes to architectural tastes.

I need to visit the Brompton Oratory and clear my head.

Our Lady of the Angels Website is here. And here is a bit on the history of the Oblates.


In 1851 Cardinal Wiseman sent his most prestigious convert, Henry Edward Manning, to Bayswater to found a community whose mission would be to revitalize the clergy and faithful in the new diocese of Westminster. Manning drew his inspiration from St Charles Borromeo, who had founded an order of Oblate priests to renew the diocese of Milan in the sixteenth century. Manning founded the Oblates of St Charles at Bayswater, and had considerable success in evangelizing northwest London.
In 1865, Manning was made second Archbishop of Westminster, and later Cardinal. However he closely followed the work of the Oblates, and often returned here. He said that his happiest days were spent at St. Mary of the Angels.
The Oblates of St Charles founded many parishes in Westminster and North Kensington. Another Oblate, Herbert Vaughan, was to follow Manning as Cardinal Archbishop. The Church was enlarged and beautified, notably by Francis Bentley, later architect of Westminster Cathedral. For over 100 years, the Oblates ministered to the people of Bayswater and Notting Hill - first to the largely Irish population but later to the Carribean and other ethnic communities that make up the exciting mixture that is this part of London.
In the 1970s, Cardinal Heenan, perhaps feeling that the Oblates' quasi-monastic regime was unsuited to busy city life, dissolved the Oblates, and the parish passed to the secular clergy of the Diocese of Westminster.

I think I have to warm up to this Church, which was built in 1857 in a flurry of English Catholic Triumphalism. I do prefer the elegance of the Oratory, but perhaps this will grow on me. I am mentally comparing it with the glory of Sherborne Abbey, which is totally unfair of me, of course.