Huckabee on Abortion and Guns

Posted by Supertradmum
Mike Huckabee, speaking on his Fox News show, said America doesn’t have a gun problem or crime problem but a “sin problem” and that while the Aurora movie massacre was a horrible incident that deserves the media coverage it's getting, other daily American tragedies such as mass abortion, suicides, and other murders should receive more attention.The former Arkansas governor and presidential candidate said his Fox News segment that the shooting “is impossible to understand except that we live in a world where there is evil.”“We simply don't know why any person would reach deep enough into the forces of darkness to decide to kill innocent people simply watching a movie,” Huckabee said, adding that he is refusing to name the killer because he is not interested in “helping him become a celebrity.”Huckabee said killing a dozen people in a movie theater gets attention because it doesn’t happen every day “but one million innocent and unborn babies die in their mother's wombs each year by elective abortions and we pay scant attention to that.”He cited the 6,500-plus troops lost in the wars in Iraq and Afghanistan and suicides in the U.S. as other examples of tragedies which do not generate as many headlines as a mass shooting.“I'm not attempting to disparage the attention being given to the Aurora theatre shooting,” he noted. “We should all pray for the victim,  their families and friends and offer our help for the physical and emotional recovery  of the survivors. But the victim of a murder in a convenience store robbery or a wife who dies at the hands of a serial abuser is also precious life.”“Ultimately,” Huckabee concluded, “We don't have a crime problem or a gun problem – or even a violence problem. What we have is a sin problem. And since we ordered God out of our schools and communities, the military and public conversations, you know, we really shouldn't act so surprised when all hell breaks loose.”

Read more on Newsmax.com: Huckabee: ‘We Have a Sin Problem’
Important: Do You Support Pres. Obama's Re-Election? Vote Here Now!

Posted by Supertradmum
Some CEO must have wanted his nephew to have a job. This is SO  bad I have to share it. G4S has a theme song and it is bad...Should we write a Church Militant Song?

Here are the lyrics


You love your job and the people too
Making a difference is what you doBut consider all you have at stakeThe time is now don't make a mistakeBecause the enemy prowls, wanting to attackBut we're on the wall, we've got your backSo get out front and take the leadAnd be the winner you were born to beG4S! protecting the world
G4S! so dreams can unfurl24/7 every night and dayA warrior stands ready so don't be afraidG4S! secure in your world
G4S! let your dreams unfurlWe're guarding you with all our mightKeeping watch throughout the night

Posted by Supertradmum
New Poll on education of readers at right--I am trying to work with subjects and language.

The John Paul II Foundation for Sport in England

I grew up surrounded by sport. As kids, we went to a local gym and did all kinds of interesting and fun things. I remember that I loved climbing up this huge rope to the top of the ceiling of the gym. Hard work.

We had sport in school as well as PE, Physical Education classes. My brothers were in baseball, and I played tennis. We all had to go to swimming lessons. Two of us ran, one was in wrestling. We learned from our dad to fish, to shoot, and do archery. I was fortunate growing up in the Midwest and having fun.

Many children today do not have access to sport. I know this is hard to believe, but in London, the Catholic Church saw this need and decided to organize a sport's charity. This is an excellent idea and I support it 100%. Msgr. Vladimir Felzmann is the Chaplain for Sport. He told me that the ideals of this charity are to support sport in Catholic schools, in parishes, after school and with clubs.

The Foundation's goals are to create an awareness that all children, (and may I add, especially boys) need a communal connection to the Church through sport. This may keep them out of gangs; creating groups which provide communal security, by giving youth a place to recreate and form friendships in the Faith.

The goals are thus: to get access to facilities, especially during the summer break, on weekends and in evenings to allow sports activities.


Two, to make all realize that each parish community could have sport's clubs to develop virtues and skills, as well as friendships.


Three, to improve standards of sport (see the website link for more on this)


Four, to emphasize the spiritual values of sport.


Six, "to enable people to thrive physically, morally and spiritual through sport" and to encourage them by awards. Some of these awards are:

Here is a great photo of Msgr. showing what he can do!

This is an exciting venture. Please support this. Here are the crucial links for more information and how to donate. http://www.johnpaul2foundation4sport.org/

Posted by Supertradmum
Recently, the Monsignor who is the Chief Executor of the John Paul II Foundation for Sport, a registered charity, and who is also the Chaplain for Sport in the Archdiocese of Westminster, gave me some information on both the Olympics and the sports charity.

Msgr. Vladimir Felzmann, a fascinating priest with an interesting history, told me that he is one of the "roving" chaplains for the Olympics. Roving chaplains are not new, as I was involved in peripatetic ministry and outreach to students in the 1980s in London. The Anglicans came up with idea first, realizing that if the people were not coming to church, the ministers had to reach out to the people and be where they are.

There are 190 chaplains of several denominations involved in the Olympics, and Msgr. Felzmann will be working in Central London, with some Anglican ministers. Walking around the parks, streets and being present in the many activities which surround the Olympics, these missionaries will be "there" for the millions of visitors. There is, of course, an inter-denominational team of pastors involved in the Olympic Village, but the outreach may be much more effective.

Please pray for Msgr Felzmann and his confreres. Christ did send his disciples out into the world, and as the world in coming to London this week, Christ is sending disciples out again.

I shall have a separate post on the John Paul II Foundation for Sport, a very worthy cause. 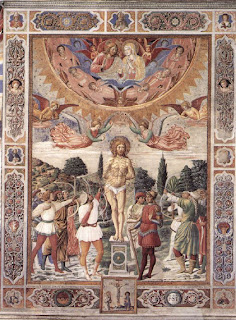 By the way, St. Sebastian is the patron saint of sport, because, as a Roman Centurion, he must have been in top physical condition. May he intercede for all the priests involved in the Olympic ministries.