Follow-up on May Day Baskets.... 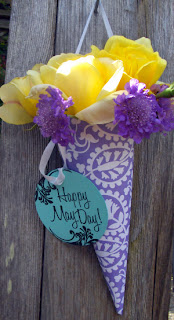 No one commented on my May Day custom of passing out May baskets on May 1st. I looked up the American custom with which I grew up and found out that the "European settlers" or early "immigrants" brought it to the States. But, from where? If any other Americans, or British friends did this, please let me know if you have any information on such a gentle, small token of friendship. My background is Luxembourg and Czech, while other families in the neighborhood were German and English. It was done in my Catholic school, as well.

Missiles? Not in my backyard....

Posted by Supertradmum
Bloggers in England are responding to the government's plan to place missiles in residential areas in London during the Olympics. Some bloggers and radical websites have stated that they live in neighborhoods where the missiles are to be placed and did not know until they received pamphlets in their doors. There has been no consultation as to this plan.


"Yesterday my girlfriend brought home the leaflet," resident Brian Whelan told Euronews. "I was absolutely shocked. I couldn't believe that this would be announced in such a flippant way. Just a leaflet put through the door - some posters put up. I don't think that's any way to tell people you are putting a missile base on their roof."


"We don't really know if it will make us feel safer or more of a target," an employee of Madison's, a local restaurant was quoted by The Guardian as saying.


Residents won't need to wait until the Olympics to see the system in action. The leaflet says the batteries will be deployed with dummy missiles for a national Olympic security exercise Wednesday.


And that's not all. The Defense Ministry states there are, in fact, several locations that could be used to deploy surface-to-air missiles, though a final decision is yet to be made.


"As announced before Christmas, ground-based air defense systems could be deployed as part of a multilayered air security plan for the Olympics, including fast jets and helicopters, which will protect the skies over London during the games," the Defense Ministry said in a statement.


It's all part of the Defense Ministry's 1.2 billion-euro Olympic Security plan. The Defense Secretary had previously confirmed that Typhoon fighter jets, helicopters, two warships and bomb disposal experts would all be deployed to London as part of the plan. That's alongside 13,500 troops to be dispatched to safeguard Olympic events throughout the city.

Opinions are divided as to the necessity and wisdom. I must admit, that the photos made by media computer guys look like London would be made into a war zone--but maybe it is already. Comments?

For my sisters in Germany, England, France, Spain, Greece, Italy, America, etc. Catholicism brings dignity to women-but not all religions do so....

Posted by Supertradmum
Some of my liberal acquaintances, who think that sharia law would be a good thing, as so off-base as to make conversations laughable, if these were not so serious. Here is news from one of the areas of Russia. What do you think, as the need for law based on Christianity becomes more acute in so many places of the world? From the great Spencer....


ACHXOY-MARTAN, Chechnya — Chechnya's government is openly approving of families that kill female relatives who violate their sense of honor, as this Russian republic embraces a fundamentalist interpretation of Islam after decades of religious suppression under Soviet rule.

In the past five years, the bodies of dozens of young Chechen women have been found dumped in woods, abandoned in alleys and left along roads in the capital, Grozny, and neighboring villages.
Chechen President Ramzan Kadyrov publicly announced that the dead women had “loose morals” and were rightfully shot by male relatives. He went on to describe women as the property of their husbands, and said their main role is to bear children.
“If a woman runs around and if a man runs around with her, both of them should be killed,” said Mr. Kadyrov, who often has stated his goal of making Chechnya “more Islamic than the Islamists.”
In today’s Chechnya, alcohol is all but banned, Islamic dress codes are enforced and polygamous marriages are supported by the government. 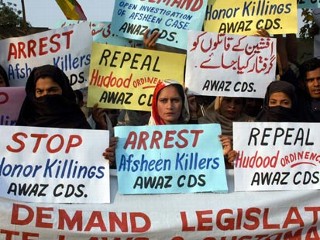 Some observers say Mr. Kadyrov’s attempt to impose Islamic law violates the Russian Constitution, which guarantees equal rights for women and a separation of church and state....Also, take a look at this video, which is very interesting. Watch to the end.