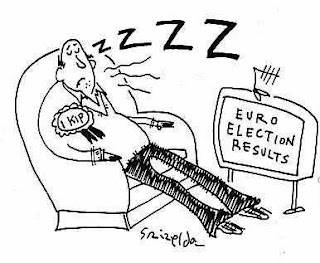 In 2003, I asked two very bright, advanced religion classes when I was teaching Great Catholic Thinkers, and another class, History of Ideas, how many students would either die for the Faith, that is, be martyrs, or, become Crusaders against heathen invaders. Out of one class, one boy said he would, if he had to do so, and out of the other class, two said they would. One young man is now a lawyer, which is a good way of defending truth and religious freedom in the States.

I tried to do my best. Complacency brings evil. See earlier post today.

Posted by Supertradmum
I am very proud of one of my old dioceses at the moment. A crucial decision regarding the awarding of a scholarship which promotes the gay agenda has been clarified by the chancery office in Davenport, Iowa. This is what more Catholic dioceses need to go, stand up for the real teachings of the Church. The reactions of the people in this article show the lack of good catechesis and the fact that so many Catholics are not really Catholics, but as Fulton J. Sheen said.."What does one call an ignorant Catholic? A Protestant." In fairness to some of my Protestant brethren, some are also aware that a active gay and a supporter of the gay lifestyle is not a practicing Catholic, or a Gospel Christian.

Here is the link to the article. The newspaper, with which I am familiar, as my parents have received it daily my entire life, is openly in support of the LGTB agenda and supports the local annual parade and fair in the Quad-City area.

Update:Response from the Diocese of Davenport regarding the Matthew Shepard Scholarship

The Diocese of Davenport congratulates Keaton Fuller on receiving the Matthew Shepard Scholarship. Keaton will be presented the award by a member of the school staff at the awards assembly along with background information concerning the award.

The Diocese has a long standing policy regarding guest speakers. This policy was explained to Keaton’s parents at their meeting with Bishop Martin Amos last week. It states: "We cannot allow any one or any organization which promotes a position that is contrary to the teachings of the Catholic Church to present at a diocesan institution." Bishop Amos also expressed his congratulations for Keaton’s reception of the award and recognized his hard work in achieving it.

We are glad that Keaton and his family chose to pursue his education at Prince of Peace Catholic High School in Clinton, IA. We hope that Keaton will benefit from the generous award and wish him well in his academic pursuits.-------------------
The Eychaner Foundation administers the Matthew Shepard Scholarship. Rich Eychaner told The Catholic Messenger that the foundation supports equality in marriage for any two people committed to monogamy. This position is contrary to Catholic teaching that defines marriage as the sacramental union between a man and a woman.

The Diocese of Davenport is strongly committed to tolerance and respectful behavior toward all people. The Diocese has taken a strong stance against the bullying and/or harassment of any student including on the basis of sexual orientation. The 2007 “Anti-Bullying/Harassment Policy” is available here.

While the diocese supports anti-bullying programs promoted by the Eychaner Foundation, the Foundation’s advocacy for same-sex marriage is contrary to Catholic teaching.

May 15th. I am ashamed of my old Diocese. Agreeing with sin is sin. Helping those lose their souls, or in this case, his soul, is sin. I apologize for Google Blogger Video App not working. I shall try later.

Will Madame Guillotine reappear in the center of Paris? 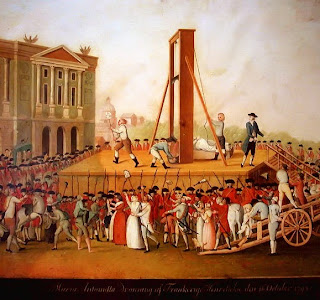 And , I do not mean the rock band....A young conservative told me yesterday that there will be war because of the politics of envy. He said that one of the reasons is that Catholics have not understood their own doctrine regarding the dignity of the individual and that people think they can get a quick fix of the crisis. He has not read my long series on socialism this past week, as he has not had the Internet. One of the things Americans do not understand is the lack of conservative news in Europe. With Sky in control, for example, one has to pay extra for Fox or the conservative stations. I saw more conservative analysis watching Italian television in Malta, than I have on the French or English television stations. Forget RTE, the national, television station in Eire, which is not only vehemently anti-Vatican, but leftists in politics as well. For conservative views, one must use the Internet.

The young socialist and communists do not have religion, except the religion of communism and even, indeed, of socialism. As long as Catholics are asleep, or even worse, complicit in the organization and success of socialism and communism, we do not have a good future on this horizon for Europe, or the world.

Wake up, apathetic and socialist Catholics. Repent, and begin to realize that the new president of France will not tolerant Catholicism, the greatest enemy against the isms.....here is a link.

And, why are the socialists, young, middle aged and old on the media not realize that austerity is the only way out of crisis. Socialists act publicly as if there is no financial crisis. What does that say about their views reality? American Catholics must lead the way in all of this.

By the way, and I know this from several sources, Hollande wants to shut down private schools, especially religious ones, by taking away their tax-free status and other means. I wonder if I shall be able to return to France and teach again? Wake up, Catholics.

I find it interesting that the vast majority of socialists I meet are either atheists or Catholics. Something is wrong here. Ironically, as I am re-reading all of Dickens systematically, I re-read The Tale of Two Cities two weeks ago. I suggest all read or re-read this. Evil begets evil.