What AM I doing here?

From the saintly Fr. Hugh Thwaites

Posted by Supertradmum
Read the entire article noted by PJ on Mark Lambert's blog. I met Fr. Thwaites once, when I traveled from Cromwell Rd out to seek him out as a young woman. I am thrilled to know he did not support Medjugorje.
From http://www.catholicculture.org/culture/library/view.cfm?recnum=3695
....a snippet from the ending...
This explains, perhaps, how seemingly impossible it is to talk people out of their going to Medjugorje or some other such unauthorized places of pilgrimage. The Devil knows of our God-given hunger for all that comes from God. He knows that all that is deepest in us longs to see and enjoy Him. So he exploits this hunger with his counterfeits in the hope that we will accept them as the real thing. And we all know how successful he has been,
We must thank God for this hunger for Himself that He has placed in our hearts. But we should be suspicious if anyone offers us shortcuts. The only shortcut to God is the way of the cross. And as for wanting to see things! How very dangerous! We are meant to spend our time here in the darkness of faith. St. Augustine tells us that during this life we are in the womb of the Blessed Mother. Then, when we die, she delivers us into the light of eternity. But, in this life, the dark way of faith is the safe sure way the saints have trod. And we know that, if we stay faithful, God will eventually give us the reward of our faith: the sight of Him in whom we believe.
So the bottom line must be: If we really want an addiction, we should become addicted to God. It is the only addiction we can satisfy all our life, here and in eternity.
As before on this blog, I recommend Michael Davies on line book on Medjugorje. We only have one life to live, let us get it right.
http://www.catholictradition.org/Mary/medjugorje.htm
And pray for those priests who push this apparition site. And, for all those lay people who spend thousands of dollar going again and again.

In the Cartesian tradition that replaced it (which still informs most popular 'thinking' even now I reckon), the soul 'inhabits' the body like a ghost inhabiting a machine. From this it seems to follow that a person has to be able to exercise his rationality before being considered alive; otherwise, the 'ghost no longer inhabits the machine', and you can do whatever you please to the empty shell.

And in the third place, there is materialist-nominalism, which informs most elite 'thinking' today (showing that the elites are dumber than the general population, since materialism is dumber than Cartesianism). This thinking says there is no such thing as a person and you can do whatever you like to the piece of meat lying in front of you, provided it won't get you into trouble or make you feel bad.

And by abandoning Thomism in the mid-twentieth century, Catholics have thrown down the intellectual weapons with which to fight these evils, and allowed this kind of situation to come about. And nobody takes us seriously because we're forced to fall back on a revelation that (logically) can only bind believers' behaviour. What a disaster! Kyrie eleison!

I suggest you recommend Feser's Aquinas to your readers. It gives a tremendous overview of this kind of thing.

And I do recommend this book. Also, Edward has a blog at http://www.lightofhumanreason.com/

Voris Revealing The Soft Side of Pro-Life Youth

Posted by Supertradmum
Bad or no catechesis.

This is serious, folks. 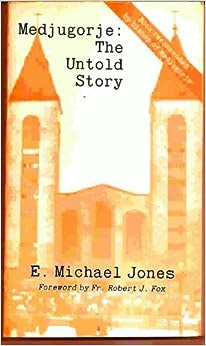 The so-called apparitions started in 1981. I honestly did not pay much attention to these and was not interested. By 1983, I was convinced of the falsity as a "gut reaction" and I began to read what I could find. In 1989, I read E. Michael Jones' book. I also looked at the original comments of the local bishops over the years.

I am personally convinced it is not of supernatural origin and have not been confused on this, but tried to be open. I have asked friends to convince me who have been there, and all I have received were emotional answers or answers based on experiences. I have tried to respect the enthusiasm of my friends who follow this, but I did not see these messages or apparitions leading to a deeper holiness or seeking of truth. Apparition followers bother me as those seeking the lowest level of comfort, rather than seeking perfection.

The daily messages are contrived and some contradict Catholic teaching.

The movements of the apparitions to other countries is showmanship.

The lives of the seers do not express the type of holiness and leaving of the world of previous seers. (A seer over a certain age in very tight jeans talking to a priest indicates a lack of respect for the priesthood, a respect which Our Lady would have communicated, if the visions were of Our Lady.)

Money has been made by close relatives of the seers, a real no-no.

Mary does not manipulate. Mary is Queen. Queens do not have to keep speaking. They say something, it is taken in and done by her slaves and subjects. Basta.

I believe it takes attention away from Fatima, which is the key apparition of our times.

Fruits do not make an apparition valid.

I have other reasons more specific for another time, and I shall abide by the decision of the Vatican, which I think will defer to the local bishops. However, we are under no obligation to believe in private revelations, even if approved.

Our Lady of Fatima, pray for us.

Posted by Supertradmum
4) As a continuation of things I came across yesterday, or heard, is the idea that Jesus Christ, the Second Person of the Blessed Trinity's Birth was an unplanned pregnancy.

This is heresy. Christ's Conception and  His Birth are the Longest Planned in the history of mankind.

From all eternity, God knew that He had chosen Mary as His Mother, the Second Eve, to be born Immaculate (a sign of His Plan right there) and that Christ, the Eternal, Second Person of the Trinity would become Man.

To say otherwise is a heresy, denying the promise in Genesis and the eternal plan of God.

All throughout the Old Testament, Christ was prophesied. Mary was not shocked. She understood much as she had the fullest indwelling of the Holy Trinity from her Immaculate Conception.

To deny her perfection and her relationship with the Father, the Son, and the Holy Ghost would be heresy.

She only questioned the angel as she did not know how she would have Christ without a man. Gabriel explained. Mary, all her life was in harmony with God's perfect Will. She trusted God. She was not anxious. These are all Protestant interpretations. She did not talk to Joseph as she trusted in God.

How horrible to compare her to a woman who has normal intercourse and an unplanned pregnancy.

I hope Catholics who say, blog, or tweet this will stop talking about "Mary's unplanned pregnancy".

Meggings thanks to a link from Ruthie B

I hate it when girls wear these and I saw two girls on the altar on Christmas Day in Ireland in 2011, one reading and one playing a violin in just a sweater and leggings.

Email ThisBlogThis!Share to TwitterShare to FacebookShare to Pinterest
Labels: death of the west, decline of the West, Ireland

Several Points To Clear Up

Posted by Supertradmum
Three errors I have encountered on Wednesday, things I have covered on this blog before, which need repeating.

1)
I have posted many times on this blog the corporal and spiritual works of mercy. There are some Catholics who are telling me that no one has the right to correct others on matters of sin or morals.

The Church has a different idea. And, these are an obligation not a maybe list. If we do not do these things, we are not following our duty as Catholics.

2)
Not everything the Popes say is infallible. Look at the tags and labels on infallibility. There is much confusion on this.  An opinion of a pope is not infallible and may be very wrong. Popes are human. We have an infallibility doctrine for a reason for specific items.

3)
Contraception is a mortal sin. Period.

Posted by Supertradmum
This past week I have relied on some older posts. "Enjoy".