Posted by Supertradmum
Oh dear, I went to a Mass this evening wherein a twelve year old girl did the readings, an very young altar server read the bidding prayers, and a five year old took up the collection.

There were eight adults counting me in attendance.

And in Ireland in Dingle this day...

Posted by Supertradmum
Happy Feast to all named
Wenceslaus and Vaclav.....

The first connects St. Stephen's vision of heaven "opening up" and the martyr seeing Christ in glory.

This reality of heaven was not only a gift of consolation for the soon-to-be-stoned man, but part of the saint's witness. He was telling those around him that Christ was indeed in heaven, resurrected, in body as well as in soul.

This statement was a reference to everlasting life, which the Sadducees did not hold as a truth of their sect of Judaism. Already, we see, in this fact, a corruption of the Revelation from God in the Old Testament, as David and other prophets referred to heaven and hell, and in the Book of Maccabees, we see the Jews praying for the dead to enter into their reward, after having their sins forgiven.

That the Sadducees would have responded violently to St. Stephen's account of seeing heaven indicates that God's effort to correct the members of this sect, through this holy man, was refused.

Not all people want to hear the truth, especially it is will change their status and lifestyles.

Second, St. Stephen was a deacon. In Morning Prayer, we read this today:

2 And the twelve called together the whole community of the disciples and said, “It is not right that we should neglect the word of God in order to wait on tables.[a] 3 Therefore, friends,[b] select from among yourselves seven men of good standing, full of the Spirit and of wisdom, whom we may appoint to this task, 4 while we, for our part, will devote ourselves to prayer and to serving the word.” 5 What they said pleased the whole community, and they chose Stephen, a man full of faith and the Holy Spirit, together with Philip, Prochorus, Nicanor, Timon, Parmenas, and Nicolaus, a proselyte of Antioch.
I have known many, many permanent deacons in my long life and I can say that only two have struck me as holy. Some of the deacons I have met and with whom I have worked were actually in disobedience to the Church regarding the female priesthood, homosexual acts and liturgical practices, On the other hand, the two men I want to praise work with the poor, in the food banks, quietly personally, helping those who are poor to have some dignity of lifestyle.
Today, I want to salute two deacons who have revealed the true role of the deacon to me.
Good bless Deacon Bob and Deacon Tony.

Thoughts on St. Stephen Part One

ACTS 6:8-10; 7:54-59
Stephen, filled with grace and power,
was working great wonders and signs among the people.
Certain members of the so-called Synagogue of Freedmen,
Cyrenians, and Alexandrians,
and people from Cilicia and Asia,
came forward and debated with Stephen,
but they could not withstand the wisdom and the spirit with which he spoke.

When they heard this, they were infuriated,
and they ground their teeth at him.
But he, filled with the Holy Spirit,
looked up intently to heaven
and saw the glory of God and Jesus standing at the right hand of God,
and he said,
“Behold, I see the heavens opened and the Son of Man
standing at the right hand of God.”
But they cried out in a loud voice, covered their ears,
and rushed upon him together.
They threw him out of the city, and began to stone him.
The witnesses laid down their cloaks
at the feet of a young man named Saul.
As they were stoning Stephen, he called out
“Lord Jesus, receive my spirit.” 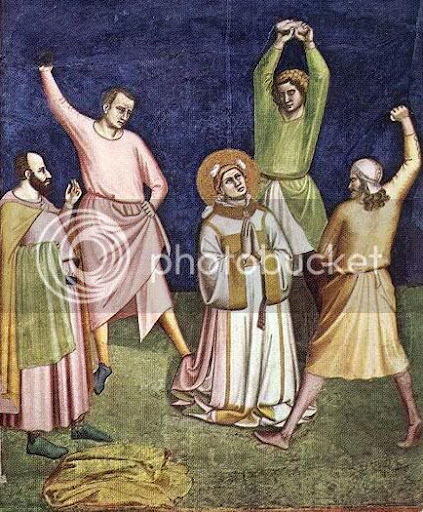 Jesus said to his disciples:
“Beware of men, for they will hand you over to courts
and scourge you in their synagogues,
and you will be led before governors and kings for my sake
as a witness before them and the pagans.
When they hand you over,
do not worry about how you are to speak
or what you are to say.
You will be given at that moment what you are to say.
For it will not be you who speak
but the Spirit of your Father speaking through you.
Brother will hand over brother to death,
and the father his child;
children will rise up against parents and have them put to death.
You will be hated by all because of my name,
but whoever endures to the end will be saved.”


It is easy, in this day and age of martyrdom in the middle eastern countries and in Africa, to think of what martyrdom really is. However, there are still a majority of American and English Catholics in 2014, who have never lost a job for being Catholic, never not being promoted for being Catholic, or having to change jobs for being a Catholic. As we know, midwives and, perhaps doctors in England who are Catholic will be forced to leave their professions.
In America, some people have had to shut down private businesses of photography, baking and catering in order to uphold their Catholic identity.
The problem with too many Catholics is that they are willing to compromise. I see it daily. One's conscience is like a sharp, expensive knife. If one uses it and cleans it, pays attention to it, it remains a useful tool. If one ignores it, it rusts and, eventually falls apart.
I have written about persecution dozens of times, but, today, St. Stephen reminds us that it can happen anywhere, quickly.

He was killed for three reasons. The first was that he was proclaiming Christ as God. The second is that he was given infused knowledge and had the gifts of the Holy Spirit in order to argue better and win reasonable arguments.
The third was jealously and the hatred of the holy.
Yes, some people hate all things and people which are good and holy.
St. Stephen tells us today to get ready, to be ready, to keep our eyes focuses on God.
God allowed St. Stephen to see heaven, which enraged others. Real Catholics have a glimpse of heaven daily at Mass.
Be ready..............