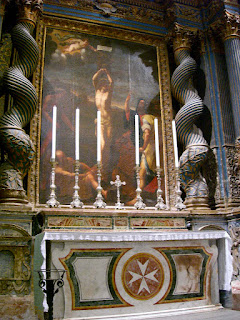 Some of these fantastic talks are no longer available. Try. http://catholicaudio.blogspot.co.uk/2007/08/talks-by-fr-chad-ripperger-fssp.html  Some were given in Cedar Rapids, Iowa and two of my friends were actually there. I have mentioned Father Ripperger on this blog at other times.

Una Voce was one of the groups.

Another talk is here. http://supertradmum-etheldredasplace.blogspot.co.uk/2012/08/fr-ripperger-on-sacrifice-of-mass-and.html

Posted by Supertradmum
A nun was shot at in Pakistan and her driver was injured at a shooting outside the Cathedral in Hyderabad. Check this out. But, repeat after me, "This is not about the movie."

Can we all organize a commentator and blogger fast day for America for today Friday, September 21st?

I am asking everyone to join me in this fast for a new president and a new America which puts God first.

I put up a poll on the side so that we can encourage one another.

I shall pledge my Friday as a day of fast and abstinence.

Please let us try and do this together. Where two or three are gathered in My Name..the promise of Christ.

Just a quotation-Obama and Alinsky

Posted by Supertradmum
The key to Obama's vision in Chicago, according to Marilyn Katz, was the city's most famous radical: "Remember, this is the community of Saul Alinsky. And most of the first housing groups were the Alinsky groups who were still banging at the door."Katz, an influential Chicago public relations executive and longtime Obama friend and political operative, has visited the White House more than two dozen times since 2009.Like so many in the liberal power base that served as a springboard for Obama, Katz had activist roots stretching back to her days as a Students for a Democratic Society operative in Chicago.A Futures Committee handout for the Valentine's Day meeting titled, "Barack Obama's principles of community development," said the proposed program had "to organize around production, not just consumption."Such words were a clarion call to activists raised on a thousand variations of the Marxist labor theory of value and capitalist alienation."He really questioned the kind of surrogate capitalist strategy that most of the nonprofit community-based organizations had been pursuing," Katz told the Examiner.

The Caravaggio Call of Levi 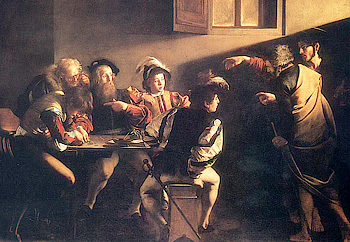 When one is in Rome, one can hardly take in all the art. As Caravaggio is one of my favourite painters, I would always go out of my way to see one of his startling paintings of a Biblical theme.

His Call of Levi captures the simplicity and astonishment of Christ's invitation, "Follow Me."

That is all Christ needed to say. Levi is amazed. Who me? Why me? But, he follows.

No questions, no information.

We can say yes and we can say no...to Life, to Christ.

The call is that simple and that astonishing.

Love the people who may or may not be paying attention.

God bless Caravaggio and I hope he is in heaven, despite his tumultuous life.

Posted by Supertradmum
"They are educated persons of various backgrounds, often students. They meet at campuses, clubs, and coffee houses and internet cafes. Materials and literature are usually kept in the home or at secluded meeting places." - FBI terrorist sleeper cell brief

One of my friends thought this was a description of seminarians. I thought it described bloggers.

Could be the description of the student union at any small Catholic college.....

And, we pay these people to do what, exactly, like protect us? 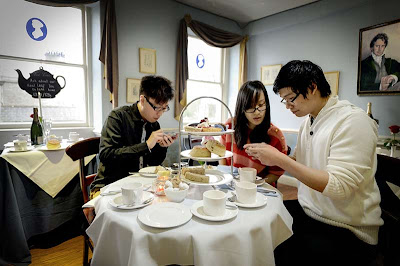 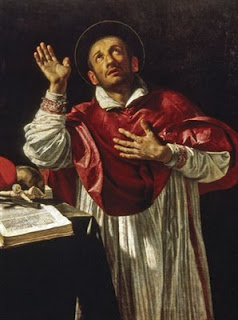 When I was in a lay community for many years, we used to say that title above, as we lived in Minneapolis, which was then doughnut land. The idea of the phrase was that nothing was stale but new and exciting, as fresh, hot doughnuts on a cold Minnesota morning.

Yesterday was one of those doughnut days. I go to see and touch the reliquaries of many saints and martyrs in a hidden cache in London. I got see the green, ordinary time chasuble of St. Charles Borromeo. And, I got to kiss the reliquary of his many bones, behind glass, as well as parts of his clothing and vestments.

This was almost too much, as Charles is a family name, with generations of Charles-es in my family and female variations thereof, such as Carola.

I claim St. Charles Borromeo as one of my patrons as well, because of the name connection and because of his influence in implementing the decrees of the Council of Trent.

What a fantastic patron for our times.

The Saint Bede Studio Blog has this on St. Charles.

Saint Charles laid down regulations about the dimensions of vestments for the Sacred Liturgy because, it would seem, he was concerned that the form of the vestments, which had been handed down for centuries, was being cast aside in favour of something convenient and “fashionable”. The chasuble, derived from the Latin word for “a little house” had been for centuries an ample garment. In the 15th and 16th centuries, there had been significant divergence from this Tradition, however, resulting in a form of chasuble that wasn’t ample, but cut right back so that it comprised a sort of narrow pendant, front and back, on the wearer. We know this form of chasuble as the “Roman” or “fiddleback” chasuble, and some claim that this is the form of the chasuble that is truly “traditional”. But Borromeo didn’t think that: he thought it represented a break with Tradition. And he specified the minimum size to which he expected chasubles to conform. They were to be at least 54 inches (138cm) wide and, at the back, they were to reach down almost to the heels of the wearer. Saint Charles wasn't attempting to determine how a chasuble should be decorated, he was simply trying to preserve a minimum standard for the dimensions of the chasuble.

The one I saw yesterday was just as grand as this one at St. Mary Major.

Some of the saints' relics were from Philip Neri, many martyrs, of the Popes Clement, Sylvester, and others. I am still overwhelmed.

The number of bones from St. Charles Borremeo was stunning.