Posted by Supertradmum
If you are fortunate enough to live near a church which has Tenebrae, I encourage you to go. I miss this special Holy Wednesday service, which begins with a procession of lit candles and proceeds through the singing of the Lamentations of Jeremiah, with a candle being extinguished until the entire church is in darkness. Then, the congregation takes the hymnals and bangs them on the pews to create the sound of the earthquake which happened when Christ died. 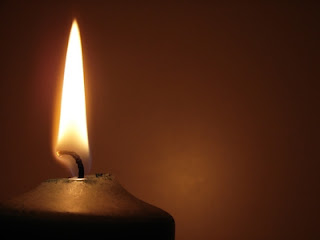 Tenebrae means shadow or darkness. The ancient form was, as this note from Catholic Encyclopedia states,  On the three days before Easter", says Benedict XIV (Institut., 24), "Lauds follow immediately on Matins, which in this occasion terminate with the close of day, in order to signify the setting of the Sun of Justice and the darkness of the Jewish people who knew not our Lord and condemned Him to the gibbet of the cross."


The simplicity of the service, which is only a meditation on the Death of Christ, is a fitting beginning to the grand liturgies of the Triduum.

"How doth the city sit solitary that was full of people; How is the mistress of the Gentiles become as a widow; the princess of provinces made tributary! Weeping she hath wept in the night, and her tears are on her cheeks. There is none to comfort her among all them that were dear to her: all her friends have despised her, they are become her enemies."


Several of the Psalms are also sung, with some readings from St. Augustine on the Psalms. 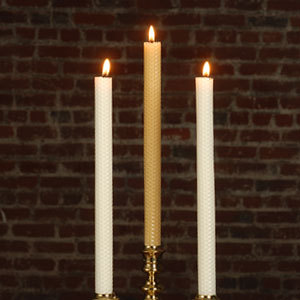 "Think not, therefore, that the wicked are in this world without a purpose, and that God worketh no good out of them. Every wicked man liveth, either that he many himself be corrected, or that through him some good man may be exercised."

Seminarians praying at an abortion mill--our future generation of priests 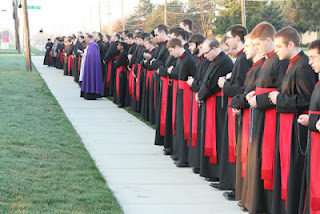 Seminarians from the Pontifical College Josephinum wearing their house cassocks (which identify them with their particular seminary), and praying outside of an abortion clinic:
In Caritate Non Ficta

Posted by Supertradmum
Father Gabriel continues with his clarification of St. John of the Cross' stages of purification.
The movement from the prayer of meditation, which uses the active imagination, to the prayer which does not rely on the senses is the movement from beginner to the next stage, which is contemplation. Contemplation is more pure, more spiritual than meditation. This is the stage of simple, yet prolonged prayer. This is also the stage of passive formation. God takes over and if the soul cooperates, there is a level of illumination which happens, connected to spiritual knowledge and discernment. Father Gabriel makes a very important distinction that that the soul should not take the initiative spiritually, but wait for the passive activity of God. The soul lets God take over, even one's actions. This implies a great trust as well as the detachment from all else. This Illuminative Way is a transition period. 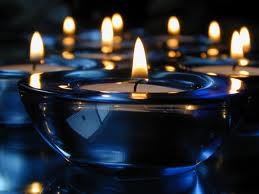 One needs a spiritual director for all these stages, although, the infused knowledge, ironically in a way, gives one guidance directly. 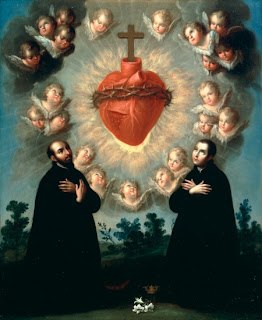 Father Gabriel in his book on St. John of the Cross, writes this:


Love sujects the love to the object loved; it make him love all that the beloved will; it transforms the willl of the lover into the will of the beloved, so that it is as though there were no longer two will but only one: that of the beloved, to which the lover conforms himself completely.

Father is quoting St. John and paraphrasing a longer section. The first stage of the purification of the sensible part of the soul is something which most of us understand. Yet, how many times, do we start and stop this process, going backwards because we either lack courage or generosity, or, simply, love?

The lover, as Father points out, responds quickly to a suggestion or question. In fact, the true lover anticipates the requests or desires of the beloved. And, as he states, "To do things thoroughly, not by halves; such is the outstanding characteristic of Carmelite spirituality."

Part of the poem, only one of St. John's from the Ascent, reads


Without this purification, true contemplation cannot happen. It is the empty heart which can receive God.