from Newsmax--persecution warm up for Catholics in England and Wales

More . . .
A    A   |
Email Us   |
Print   |
Forward Article
The government of Wales is moving against Catholic schools that are organizing students to protest a new government plan to back gay marriage in that country.

The students at the Catholic schools were recently invited by their teachers to sign a petition against the government’s plans to legalize gay marriage. That drew the ire of some Welsh politicians.

And government ministers in Britain are "looking into” whether or not to issue a similar warning to schools in England, reports The Telegraph newspaper of London.

An estimated 600,000 people so far have signed the Coalition For Marriage's  campaign petition backing traditional marriage, a document supported by major United Kingdom religious figures like Lord Carey, the former Archbishop of Canterbury.

The Catholic Education Service said last month that it had contacted its 385 secondary schools in England and Wales asking them to circulate a letter by the Archbishops of Westminster and Southwark - the Most Reverend Vincent Nichols and the Most Reverend Peter Smith - that was recently read in parishes, defending the traditional definition of marriage.

The schools were also encouraged to consider publicizing the petition.

So-called humanist politicians accused Catholic schools of “political indoctrination” by promoting the campaign among schoolchildren. The government in Wales also is looking into whether the schools could be breaking equality and political impartiality laws.

But Leighton Andrews, the Welsh Assembly Government minister for education and skill, said that he had been advised by legal experts that the effort was not homophobic and therefore did not break equality laws.

He has ordered schools in Wales to give pupils a “balanced” view. They must also specifically tell pupils about the minister’s intervention.

An actress under fire for playing Mother Teresa? 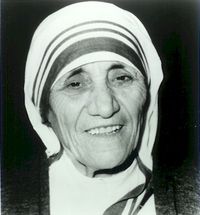 How can anyone be upset with an actress playing Mother Teresa? People never cease to amaze me. Mother, holy saint, please pray for us. Here is the link.

May 9, 2012
WASHINGTON—Cardinal Timothy Dolan, president of the U.S. Conference of Catholic Bishops (USCCB), issued the following statement:
President Obama’s comments today in support of the redefinition of marriage are deeply saddening. As I stated in my public letter to the President on September 20, 2011, the Catholic Bishops stand ready to affirm every positive measure taken by the President and the Administration to strengthen marriage and the family. However, we cannot be silent in the face of words or actions that would undermine the institution of marriage, the very cornerstone of our society. The people of this country, especially our children, deserve better. Unfortunately, President Obama’s words today are not surprising since they follow upon various actions already taken by his Administration that erode or ignore the unique meaning of marriage. I pray for the President every day, and will continue to pray that he and his Administration act justly to uphold and protect marriage as the union of one man and one woman. May we all work to promote and protect marriage and by so doing serve the true good of all persons.

If one is a Catholic, one cannot support the Democratic party.

Some first reactions to the Obama blasphemy

Posted by Supertradmum
The Guardian link for article below.....here and some of the reaction., including Romney from Fox. First is the Romney statement, followed by Reed's statement.


Following President Obama's comments in a TV interview expressing his support for same-sex marriage, his likely GOP rival Mitt Romney said Wednedsay he maintains his opposition to it -- the same position he's had since he "started running for office"

"I have the same view on marriage that I had when I was governor and that I expressed many times. I believe marriage is between a man and a woman," he told reporters following an event at the Oklahoma Republican Party headquarters, where he garnered the endorsement of Oklahoma Gov. Mary Fallin.


Ralph Reed, founder and chairman of Faith and Freedom Coalition, a conservative, anti-same-sex organisation, condemned Obama's shift as breaking a promise he made in 2008 to support traditional marriage."

"Combined with his administration's opposition to the Defence of Marriage Act, it reveals a president who is tone-deaf and out-of-touch with the time-honored values of millions of Americans. This is an unanticipated gift to the Romney campaign. It is certain to fuel a record turnout of voters of faith to the polls this November," Reed said.


In addition, some Latino groups have decried this Obama position.


Rev. Sam Rodríguez of the California-based National Hispanic Christian Leadership Conference said that the churches he represents reject homophobia, but view marriage as a religious institution.

“We are both pro-traditional marriage and anti-homophobia,” Rodriguez told Fox News Latino. “This is not about civil unions or a legal apparatus. This is about the government saying, we are going to hijack a religious doctrine and change it for you.”
I hope so. Sadly, the politicians of New York have mostly come out for this false view of natural law rights. I hope none are Catholics, as they need to consider their immortal souls. This is not a civil rights issue. Sin has no rights.

A Sad Day For A Once Great Country 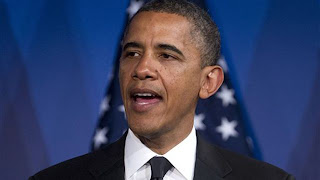 I feel physically ill, as The Guardian and Fox News have just in the past hour and one-half, reported Obama's endorsement of same-sex unions. Not only did he do so, but he invoked the Name of Christ in his statement, committing sacrilege and blasphemy, as Christ, the Lord and God, Second Person of the Blessed Trinity, would never want anyone to encourage a deadly sin, which is what the President has just done. His statement show a complete disregard for natural law and for the age-old Judeo-Christian prohibition on homosexual acts. As a Black Liberation Theology adherent, he does not believe that the Jews are the Chosen People of God and that his brand of so-called Christianity can use violence for a material Messianic age. I have written at length on this since 2008, Summer of, on my previous blog, and here, below.


If anyone thinks Obama is a moral leader, this statement contradicts that stand. If anyone is in doubt of his pandering to a particular group for votes, get real. Here is the horrible stance taken from the video:


“This is something that, you know, ....talked about over the years and she, you know, she feels the same way, she feels the same way that I do. And that is that, in the end the values that I care most deeply about and she cares most deeply about is how we treat other people and, you know, I, you know, we are both practicing Christians and obviously this position may be considered to put us at odds with the views of others but, you know, when we think about our faith, the thing at root that we think about is, not only Christ sacrificing himself on our behalf, but it’s also the Golden Rule, you know, treat others the way you would want to be treated.”


Now, as a Catholic, I believe, as all good Catholics do, in natural law philosophy. We also believe in the sacredness of a marriage between a man and a woman, for the pro-creation of children and for real love, growing to the type of love which builds the Church, as I have discussed on this blog over the past few days.This statement of the President jeopardizes the work of the movement to preserve traditional marriage here in England. It also follows up hard on the election of Hollande in France, who also supports same-sex civil unions. We are in the throes of the biggest challenge ever faced in the West, since either the crusades or the Reformation-the overturning of Catholic values and Catholic law.


Let no one be confused on this issue. God has created man and woman in His Image and Likeness for a purpose, and the cynical, deceptive use of the Name of Christ shows the depth of this man's spiritual decay. We cannot have him as president for another term. His anti-life record is the worst any president has ever had, and now this. 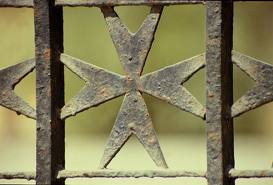 This man has brought Americans farther away from God than any president has ever done. I am ashamed and horrified. Does he believe in an afterlife, and that he has to stand before the Creator, who ordained the Ten Commandments and the Teachings and Traditions of the Catholic Church? I am afraid that this is the throwing down of the gauntlet for the union of the States. This alone could start a civil war, of those who love God and country, and those who only love their own pleasures. There are many good, honest Christians who will feel as I do--ill. God help us all. 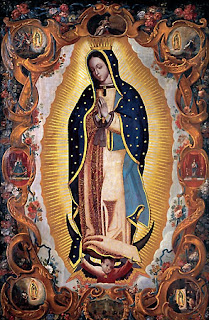 And with the financial chaos in the news today regarding Greece and Spain, the euro and the eurozone, and the election of Hollande, I cannot help but believe a great evil has been let loose upon the West, particularly Europe and America. Our Lady of Guadalupe, pray for us.