In case you missed this on Father Z....

Walking in The Footsteps of Ancestors

Posted by Supertradmum
Today, I visited the second Neolithic site I have seen in two years, but today's visit was on Gozo.

The Ggantija Temple site dates back to 3,600-3,200. The people who built this temple and others, as the one at Tarxien, which I visited in October of 2013, disappeared suddenly after a few 1,000 years, and before the Phoenicians and Romans came to Malta.

Over fifty temple sites dot the islands of Gozo and Malta, which seems to be an extraordinary number of sacred places for such small spaces. Only animals were sacrificed, including pigs, cows, goats and birds, which look in the drawings, like quail.

A cult of fertility also seems obvious because of all the "fat ladies" found, statues of small to huge sizes of well-endowed females, as well as some phallic symbols.

To stand in a place where human beings stood over 5,000 years ago creates a feeling of continuity. But, who these people were and where they came from is a mystery. The one female skull computer-reconstructed, looks very much like a beautiful Maltese woman, and definitely Caucasian.

Posted by Supertradmum
Brain dead is not dead. See my other posts and listen to Fr. Chad Ripperger on this point.

So, Ireland has killed two people.

Gold in the hands of those who desire gold is a theme in an old anime, Spirited Away. One of the most mysterious and eclectic of stories, a No Face, who is lonely, bribes people, animal-creatures, even a sorceress with gold nuggets. The heroine of the story does not want gold. She wants to save her parents and the boy, who is, of course, in typical anime fashion, not what he seems to be.

The whole story winds its way around the theme of identity. If one knows who one is, if one remembers one's name, evil spells are broken.

To turn away from gold because of a true vision of what is important rarely happens in the modern world. When I share with people that I sold my car, after being made redundant at a college at the age of 62, and decided to live in utmost simplicity, the answer is always the same-"You were and are brave."

What is brave about leaving the land of those who only want gold in their hands? Security does not and has not ever come in possessions, status, or power. Security only comes in the hands of God.

The more we grasp on to false identities, the more we are truly in danger of losing our souls.

Baptism makes us children of God and heirs of heaven. If one is not baptized, one is not an adopted child of God, except through extraordinary intervention from God. His way to salvation as seen in the promise of Genesis, the Proto-Evangelium of Genesis 3:15 is the promised Church.

This hint or first "good news" tells us that Mary was to come and be the Mother of those who honor her Son as God, the Second Person in the Blessed Trinity.

This promise is fulfilled and we have just celebrated the day of fulfillment-the Good News of the Coming of Christ into the world.

Wasted graces lie on the ground like million of specks of dust. This morning, I cleaned and dusted a vacation flat which obviously had not been cleaned in a very long time. As I threw away the dirt and grime, I thought of all the graces we throw away daily. I see this daily, Catholics who never stop and read the Scriptures, or pray, or thank God for some of the most beautiful vistas in this entire world.

The No Name was giving out gold nuggets to bribe people for love, as it was a lonely spirit. It wanted attention, and like satan, was using material things to buy honor and love. But, then, it began to eat people and animal creatures, turning into a monster of greed and obsession.

Only the young, innocent Chihiro breaks the spells and curses through selfless hard work and love. This is always the way to help others to salvation-hard work and love. Like many fairy tales, the young virginal girl must give up her "princess past" and work to save her parents and her new love, Haku.

No Name calms down and is "adopted" by the twin sorceress and one thinks it will not be lonely again. Thus, Chihiro saves this demon as well from destruction. It will become something else.

Catholics have purposefully lost their identity in some countries, where the dominant culture demands, or seemingly demands comformity. But, in a Catholic country, there is no excuse for the loss of identity. Outwards pageant and feasts reveal a desire to keep some of this identity, but the truth is that externals cannot make a person holy, only internal conversion, daily turning away from gold and towards God's Hands, which we see on the Cross as nailed for our sins.

Identity comes with prayer, study, reflection. Like Chihiro and Haku, we cannot lose our names in order to be who we are. The name we have is "Catholic", and like the heroes in the story, identity is regained only after suffering.

Today, as we think of St. John, who waited at the sepulcher for St. Peter to enter first, as Peter was chosen to be the first pope, we are reminded that John and Peter, called by name, one in his profession of faith and one standing at the foot of the Cross, had different roles, but identities, new ones, in Christ.

Do you know what your new identity is? Is it an old one which needs to be re-found, re-gained? Like Chihiro and Haku, do you understand that who you are determines your life here, and in the world to come? Chihiro has to be detached from her own world and her parents in order to come into a spiritual maturity, in order to love.

Many children of our time have no identity except those given, formed through television, movies, computer games. They may be lost souls, needing the hard work and love of a Chihiro. Because she is "saved" by recognizing her own spiritual strength through love, Chihiro saves No Face and Haku, her parents and herself. She saves the weird city and tames anger in the twin sorceresses.

In really good fairy tales, such as in the myth of Psyche, a girl-woman has to endure suffering in order to become pure and help purify others. It is interesting that the water imagery in the anime film is what brings about love. Again, baptism brings us into new life, into love, and we are different than those who are not baptized. One reason why these modern myths are popular is that the younger ones lack identity, not being given such by their parents, being led into shallow, materialistic, greedy worlds which cannot bring life.

In today's first reading, St. John tells us that he and his community has seen Life, has experienced the visible God, Christ in order to be in union with the Father through the Spirit.

Do not waste graces. Do not open your hands to gold nuggets, but to the graces which will bring joy, most likely through work, trials, sufferings. Therein is your identity.

The Real Lady of Ephesus 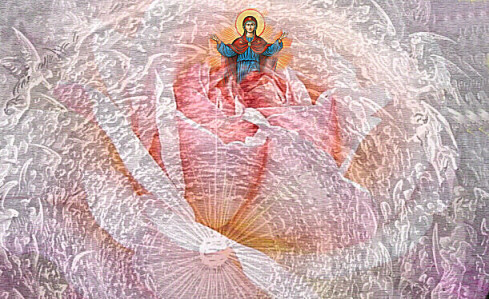 After the Ascension, St. John most likely took Mary to Ephesus when the persecution of the Christians began in Jerusalem.

Ephesus held one of the ancient wonders of the world, the great Temple of Artemis. Artemis, or Diana, was one of the most popular goddesses of the pagans. She was patron of both virgins and childbirth.

The real patron of childbirth and the true matrona of virgins came into Ephesus with a young man, unknown to most of the ancients and revered by a few men, who were now scattered all over the world-the apostles.

God prepared the ancient world for Christ through many sources, including the Diaspora of the Jews in the great Exile.

When the Greeks and Romans met the Jews, a syncretism occurred in several major areas. This syncretism could be one of the reasons why the Three Kings, Magi of the Zoroastrians, sought Christ. There sacred texts were "infiltrated" by Jewish texts in Babylon and most likely, Medea.

John brought Mary to Ephesus, where their house may still stand and such a place is honored. Of course, we hear of Ephesus in the Acts of the Apostles, when St. Paul is threatened by those making money by creating and selling idols of Artemis.

John has to protect Mary from many dangers, and in keeping with the times, when women had few rights, watch over her until God called her home in the Dormition and Assumption.

But, today, on the Feast of St. John, I like to think of them sitting and talking about Jesus, praying together, walking through the streets of the great city, perhaps even looking at the huge temple, so different from their small, sacred house.

The real Lady of Ephesus is Mary, not Diana. And, today, we honor one the Evangelists, the apostle Christ loved dearly and the one to whom He entrusted His own Mother, our Mother. Maybe some of those who met Mary realized that Diana merely prepared them for a real woman of heaven, the Blessed Virgin Mary.