Posted by Supertradmum
Because of the great Dr. Sanity, and because I am surrounded by people who have created their own worlds and are completely out of touch with reality, I am inspired to write again about reality and objectivity. From a Catholic point of view, objectivity is holiness, the putting on the mind of Christ. See several posts below. Only when we are truly humble, admitting our own sin, limitations, and even small talents, can we love. Only by standing back and taking an objective  look at life, as it really is, can we love. Love does not play games, or invent parallel worlds. It intersects with the worlds of others, bringing reality, truth into situations and creating freedom.

Freedom is not available to those who want their own way and only see their reality. Freedom is being open to truth and accepting that reality which is not of one's own making, but in the case of the Christian, God's making. Assent to God's Will is reality.

I had cancer, and I had to accept the consequences. This is reality. At first, one goes into a denial, a status quo, until one cannot deny the symptoms, or the diagnosis. The quicker one accepts the truth, the more easily it is to deal with the losses which inevitably come. That God allows cancer, or death, or separation, only means that we are given an opportunity to face reality and be freedom. Deceit creates chains, unhealthy heavy chains, which hold one down to a prison of lies and unreality. Truth breaks those chains, be it through an illness, or treatment for alcoholism or psychological counseling or the Sacrament of Confession. Basically, humility is just truth. I am this and not this. I can do this and not this. I can be this and not this.

The lies of our century have created tyrannies. All tyrannies rely on propaganda, the building up and maintaining of lies. Why people assent to believe in propaganda is a mystery to me.I taught college and university levels classes, including logic for years. I gave up in 2010, when I realized that the administrators on the whole were as out of touch with reality as my students. This Post-Modern phenomenon  is the result of complete subjectivism. The world of POTUS is his world, and the world of my student Z was his world and the world of my administrator Y was her world. The thing which I do not understand is that there are many highly intelligent people in Congress and the Supreme Court, in America, in the Catholic Church, who "seem" grounded. Are they all in their own little worlds? Is this how most people survive? As a person raised on Aristotle and Aquinas, I was taught that truth begins with what is, what is natural in nature, for example, or what we perceive objectively. I am not sure how people lose objectivity. A good teacher has it, a good parent has it, and a good spouse had it. How can a person really love without objectivity? Real love is objective. It is God's Love.


How can we trust the nation to a group of people who are living in cloud-cuckoo-land? It is very scary, as some other nations, which are living in reality (are there any) could easily take advantage of our Disneyland outlook. The delusions are so broad and deep, is there any chance of this changing without great catastrophes waking us all up? Ah, the Greeks, who invented that word, catastrophe, knew all about the change of the wheel of fortune, the facing of truth for such as Oedipus, through tragedy. I do not wish for this, but it does seem, as in Greek drama, inevitable. In Greek drama, which I taught and in which my son did some acting, there is a movement of the poetry from strophe to antistrophe to catastrophe.

The prologue and the entrance ode occur followed by the strophe, the turning of the chorus, physically either on or off stage, at a different level. The antistrophe is another turn, matching the meaning of the text, the poetry, so that the physical movement imitates the words. The catastrophe is the sudden changing of the action, following some episode, where, at least in the great tragedies, a sudden event of horror occurs, such as Oedipus' realization that he killed his father and married his mother. This is followed by the stationary ode and the exit ode.

We are headed in the States for the catastrophe. As long as people, as even the heroes or heroines in the Greek dramas, live in deceit or darkness, there is no truth. The catastrophe brings truth, light and usually, peace.

We can only hope. Oedipus' story is told in three plays: the trilogy of Oedipus Rex, Oedipus at Colonus, Antigone. These tragedies have three dramas to work out some type of peace and reconciliation. Do we have time?

Email ThisBlogThis!Share to TwitterShare to FacebookShare to Pinterest
Labels: decline of the West, enough already

Begging because of a sacrilege; if someone can allow a sacred object to be desecrated, it has already happened in the mind and soul of those who have lost the Faith 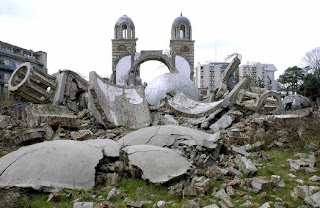 On Father Ray Blake's blog today is the posting of the sacrilegious selling of Church plate, and other sacred objects at the upcoming Ramsgate Abbey sale. I am horrified. My American family paid for stained glass windows, a gold tabernacle, and other sacred objects for several churches over the years in the Midwest. We assume that these things would stay in a Catholic Church. There is no excuse for selling sacred objects, some used in Adoration, such as monstrances, and even chalices and ciboria used in the Mass. Why did the monks not give those objects to local churches, or to the great abbeys at Buckfast and Downside, which would have cared for these? 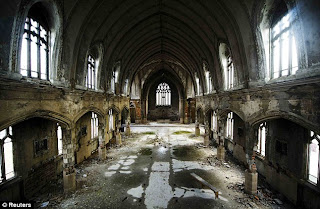 I cannot express the inappropriateness of this sale. It amounts to stealing.
However, I am going to beg. My own son and others in the seminaries may not have families wealthy enough to buy them the chalices necessary as gifts for their ordination days. I know a Latino son of a widow who is going to be ordained, for example, from a poor family. Also, there are missionary groups which do not have such beautiful items to use on the altar. Why not, those of you who can, buy some of these objects which have held the Body and Blood of Christ? ( And, do they believe that Christ is Truly Present at Ramsgate Abbey? ) Then, give them to a temporary deacon or missionary, or seminarian? How can the monks defend themselves, even to us lowly laity, who pay for these things?
In the States, art connoisseurs buy these sacred objects for their dining room buffets, living rooms, bedrooms, entrance ways. I know of a homosexual couple who collect religious items from Catholic Churches in California. Why, I do not know. Their house is full of these items sold in auctions.
Or, Satanists buy them for Black Masses. A good friend of mine, years ago in the special branch of a police force in Minneapolis, explained this to me.
Please, Catholics -- save these items--please.
Catalogue-- here-- Save these objects from dishonor, and possible blasphemy and sacrilege.
I am not an emotional person. Ask my family, but I am sobbing while writing this posting.

The Real St. Brigid, "the Mary of the Gael"

Posted by Supertradmum
Today is the feast day of one of Ireland's patrons, St. Brigid, 451-525. Now, since I have been in Eire, I have discovered some craziness among certain groups of Catholics and lapsed Catholics, who have become infected with the virus of New Age nonsense. Many ideas floating around this great Saint Brigid have become more popular than her real person, who in her own right without the help of New Age myth-makers, was a great leader, abbess of double monastery, (like my patron here, St. Etheldreda), and a holy woman of God.

So, now, in 2012, St. Brigid is being hailed as, (get ready), a feminist, a goddess of the Celts, the first woman priest of Eire, and a bishop, among other things. Why the pagans have captured the story of this woman, who founded the greatest monastery in Eire, Kildare, remains a mystery only clear within the Celtic talent for story, and the mixing of truth and fiction. St. Brigid was famous throughout Europe early on for her own accomplishments and love of God, the Father, the Son, and the Holy Ghost. A good place to start real research is found here. These strong women of the early Church in Ireland and Great Britain, such as Ss. Brigid and Etheldreda, deserve our respect for who they really were, not for our modern, political, and even silly interpretations. St. Brigid stands above all us women here in Ireland, and does not need revisionists to cloud her many achievements for Christ and His Church. But, that is the impetus of New Age cults, to take what is good and separate such things as saints and angels from the Church, so that the members can have "religion" without ethics or dogma. Neat, but deadly for the soul.