I cannot sufficiently cover this topic on a blog, as one could teach an entire college semester course on the comparisons between Eastern and Western philosophies.

Some people who are Catholic do not care about philosophy, as they do not understand that how we think, the method of thinking and the basis for thinking must precede moral decisions as well as theology. This forms one of the reasonings behind all seminarians being required to take philosophy before they take theology.

Even if I use the simple, wiki definition of philosophy, one can see how this study involves most aspects of both the material and spiritual life.

Philosophy is the study of general and fundamental problems, such as those connected with reality, existence, knowledge, values,reason, mind and language

In a discussion with someone about Tai-Chi, the problem of interpretation of so-called arts, whether military or not, from the East, must involve a discussion of the philosophy behind activities.

Yes, Eastern philosophies are not compatible with Western views of reality, existence, knowledge, values, reason, the mind and language.

Obviously, unless one understands that philosophical ideas created an invisible thread tying together religion and all aspects of life, one will fall into either cynicism or New Age fantasies regarding life.

God created Western Civilization through Revelation and the cultures of Judaic, Greek and Roman peoples. God, in His Wisdom, could have created His plan for reaching Him through other philosophies, but He did not. There are complicated reasons for understanding that our religion of Catholicism, although originating in the Middle East, is absolutely not an "Eastern Religion".

How we think about ourselves and the world around us determines how we worship God. God demands that we worship Him in spirit and truth, not in fallacies or confusion about the material world.

The more one accepts Eastern religions and even alternative medicines, the more one moves away from the revealed truth from God as found in the Scriptures, and in Catholic Tradition.

More on this later...I am going out for a bit.

Catholics, Unite with This!

Pray for Me Today, Especially Please

Posted by Supertradmum
I have an arduous task to complete today which is a necessity.

I would really appreciate your prayers. 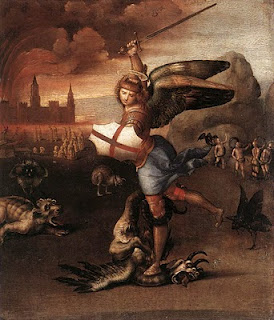 Hymns of Hope and Beauty

Posted by Supertradmum
"My brothers, I put (the pearl) in the palm of my hand, to be able to look at it closely. "I observed it from one side and then the other: It had only one appearance from all sides. "(Such) is the search for the Son, inscrutable, for he is luminous."

Today is the Feast of St. Ephrem, Doctor of the Church. You can read his notes on perfection in my series on the Doctors. http://supertradmum-etheldredasplace.blogspot.com/2013/02/on-being-bridefrom-st-ephrem-and.html

Today, I want to highlight his hymnody. A fantastic book may be found online regarding this saint's hymns on the saints in heaven. Only selections of this book are online.

In these days of growing discouragement, I suggest reading and meditating on this hymn today, a praise of all the saints who have gone before us.

As a poet myself, I appreciate the Pope Emeritus' comments in 2007 on St. Ephrem's works.

"Poetry allowed him to deepen his theological reflections through paradoxes and images. His theology became both liturgy and music at the same time: He was indeed a great composer and musician."

Time To Review These