Posted on 14 June 2012 by Fr. John Zuhlsdorf
To review:  The Holy See gave the SSPX a “doctrinal preamble”.  The SSPX studied it and proposed in return some modifications.  The Holy See and Holy Father studied the modifications.  Then the CDF and SSPX Bp. Fellay had a meeting, during which the Holy Father’s decisions about the modified preamble were delivered.  Thus, we were left to wonder what the Holy Father’s decisions were? Positive? Negative?
I suspect they were positive, since within the VIS story is an important bit of information.
The SSPX is being offered a Personal Prelature.  I don’t think that offer would be made had the CDF and Holy Father not have accepted what the SSPX had proposed earlier.
From VIS:

Important Warning on the Worship of Angels: But there were also false prophets among the people, even as there shall be among you lying teachers, who shall bring in sects of perdition, and deny the Lord who bought them: bringing upon themselves swift destruction. 2 Peter 2:1

Posted by Supertradmum
As I am visiting in the area of St. Mary of the Angels in London, I was taken by the main window, which depicts the great angels mentioned in Scripture, plus one.


Now, I have a two-fold purpose in writing this post. Firstly, I want to clarify, as I have in the past in classes, that the Catholic Church has been clear as to which angels we may venerate and invoke. The list is very small. Only those angels who are specifically mentioned in the Catholic Bible are "approved." We have the great Hebrew heritage in the Old Testament, as well as the New Testament, the two parts of the Canon of the Bible, which indicate that the three angels, who we call saints, are to be venerated. These are Michael, Gabriel and Raphael. I can write about each one at length in another post. But, today, I want to outline and present the argument which the Catholic Church teaches, that angels, as servants and messengers of God, can be honored by these names. The Old Testament and the New Testament give us these names, in many places, including the Books of Daniel, Tobit, and, of course, the Gospels.


At St. Mary's of the Angels. a fourth angel, Uriel, glows from the window, holding a trumpet. Now, the Orthodox venerate Uriel, as do some of the Jews, but Catholics, as this angel is not specifically part of our Tradition, usually do not. I was glad to see this spirit in the window.


Uriel is mentioned in the apocryphal 4th Book of Esdras and here is a quotation from the Catholic Encyclopedia:


The body of the Fourth Book, the unity of which appears to be unquestionable, is made up of seven visions which Esdras is supposed to have seen at Babylon, the thirtieth year after the destruction of Jerusalem (the date given is wrong by about a century).

Now, even though the Orthodox, Anglicans and the Jews still honor Uriel, that this Angel is found in a window in the Western, Latin Roman Catholic Church is rare. There are many windows of Uriel in the Anglican post-Reformation windows in England. I found one medieval window online on one of my favorite websites, Vidimus, which is on my blog list. It is from a church in Hereford. I do not have a photo of the window in St. Mary of the Angels, which would be a photo worth having. 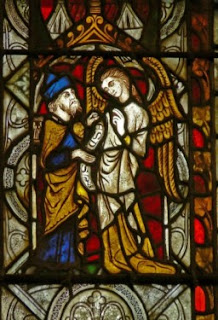 I was surprised. For the Anglicans, this angel is a patron of Confirmation, but not for the Roman Catholics. Uriel has been picked up by many authors in the occult as a patron and one finds this name even in television shows. Be careful.

The Second point I want to make is very serious. There is a "church" in America, based on New Age heresies, which honors an angel named Ariel. There is no angel in the Catholic Tradition by that name, although it is used, of course, in literature. A church in the Quad-City area of Iowa and Illinois claims that Ariel has appeared and given special, that is Gnostic, knowledge to the people of that congreagation. Ariel is not an angel of the main Judeo-Christian tradition, but part of cabal-ism and other forms of mysticism, which are not Christian.

Confusion reigns. A daughter of a friend of mine was given a statue, bought at a Catholic religious supply shop, labeled "Ariel, Patron of Confirmation". NO. NO, NO.

I explained that this angel, especially in the New Age mysticism of the local church in her area, could very well be an evil demon, or, at best, a hallucination. That someone is making statues, labeling these as partons of Confirmation, and selling these in a Catholic shop, makes me wonder as to the intelligence or real spirituality of the makers, suppliers, and sellers.

Be on your guard for false teachings. Again, New Age groups are susceptible to this type of manifestation, as these "chuches" tend towards Gnosticism.

Again, do not buy anything "iffy" just because it is popular. I have written on this before, but the great angels in the window at St. Mary of the Angels reminded me both of the glory and the dangers of angels, of whom there are, dear readers, two varieties-those from heaven and those from hell.

A photo purporting to show a baby whose mother was forced to have an abortion has shocked Chinese internet users.
Feng Jiamei, from Zhenping county in Shaanxi, was allegedly made to undergo the procedure by local officials in the seventh month of pregnancy.
Ms Feng was forced into the abortion as she couldn't pay the fine for having a second child, US-based activists said.
Rights groups say China's one-child policy has meant women being coerced into abortions, which Beijing denies.
National and local family planning authorities are investigating the incident, the Global Times newspaper reports.
"Feng Jianmei's story demonstrates how the One-Child Policy continues to sanction violence against women every day," said Chai Ling of the US-based activist group All Girls Allowed.
The group says it spoke to Ms Feng and her husband Deng Jiyuan after the incident. Mr Deng said his wife had been forcibly taken to hospital and restrained before the procedure.
Unnamed local officials in Zhenping county quoted in local media reports denied forcing Ms Feng to have the abortion.
"This is what they say the Japanese devils and Nazis did. But it's happening in reality and it is by no means the only case... They [the officials] should be executed," one reader on news website netease.com said, according to Agence France-Presse.
Activist Chen Guangcheng, who was put under virtual house arrest for campaigning against forced abortions, fled China to the US last month.

A few words....nothing matters but love 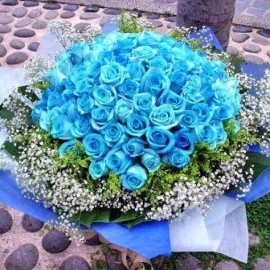 I have a simple message today. Love, even without return, as this is the perfect love of God. And, you will live in joy. You will be misunderstood, even thought to be foolish or unwise. You will be seen not as Christ, but as one of the lowest on the Earth. You will be criticized for being unworldly, or naive. You will be thought childish and you may be lonely. If you are poor or ill, you will not have comfort. Nothing matters but love.

Such is the love of Christ on the Cross, when those who taunted Him said, "And saying: Vah, thou that destroyest the temple of God, and in three days dost rebuild it: save thy own self: if thou be the Son of God, come down from the cross." DR Matthew 27:40.


Do not let your love turn to hate, but let it be purified by sacrifice, forgiveness, and praise.

Our God is the God Who did not come down from the Cross. And, He is the God of the Living and not the Dead. If you die to yourself now, you will live forever in Christ. He is All in All and carries our loves and losses in Him.

Posted by Supertradmum
I stole this prayer from JonathanCatholic. Prayers needed, please, for unity.

O Lord Jesus Christ, who, when You were about to suffer, prayed for Your disciples to the end of time that they might all be one, as You are in the Father and the Father in You:
Look down in pity on the manifold divisions among those who profess Your faith, and heal the many wounds which the pride of man and the craft of Satan have inflicted upon Your people.
Break down the walls of separation which divide one part and denomination of Christians from another. Teach all that the See of St Peter, the Holy Church of Rome, is the foundation, centre and instrument of unity.
Open their hearts to the long-forgotten truth that our Holy Father, the Pope, is Your vicar and representative; and that in obeying him in matters of religion they are obeying You, so that, as there is but one holy company in heaven above, so likewise there may be but one communion, confessing and glorifying Your holy Name here below. Amen.- Bl. John Henry Cardinal Newman