A Reminder of Etheldreda's Life

Posted by Supertradmum
Abbess of Ely from http://www.earlybritishkingdoms.com/adversaries/bios/etheldreda.html
(AD 636-679)

St. Joseph and the Truth

Posted by Supertradmum
There are a lot of false stories concerning Joseph. We only need what is in the Scriptures.

He was obedient and obviously had a relationship with God.

He listened to God and God's Messengers.

He reacted quickly to God's Will in his life.

He was righteous, following the Law and sensitive to the Law of Moses.

He learned a craft as a boy and was diligent in his work. He taught his Foster Son well.

He obeyed the rules of Judaism, as seen on the Feast of the Purification or Presentation of Christ in the Temple. He also went up to Jerusalem with his family.

He was a Protector of his wife and his Foster Son.

We need to concentrate on the Scriptures and not on spurious tales.

St. Jospeh, the Worker, pray for us today in our work and play and prayer. 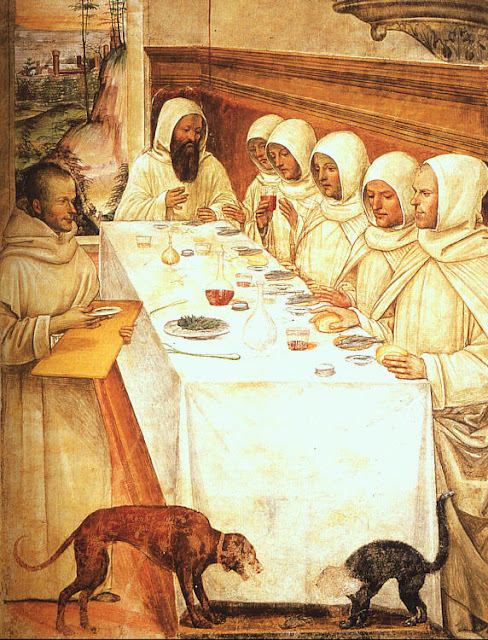 Someone asked me today how to incorporate the Rule of St. Benedict into the lay and even family life.

First of all, do not read any books on this, as there are none which are not contaminated by New Age nonsense.

Second of all, the idea is not new and for years there have been Oblates, who are lay men and women connected to a monastery. The problem is that one has to live within at least driving or train distance in order to be involved.

So, here are a few ideas, which are not connected to the Oblation.

One, simplify your life. Benedict knew that poverty allowed for energies and time to be dedicated to prayer.
Too much stuff and too many activities ruin the Benedictine atmosphere, even in monasteries. Some monasteries are just too busy.

Two, set aside, daily, regular time for prayer and the reading of Scripture. If you cannot manage an hour, manage a half hour of each, meditating, for example, on the Mass readings, one of those, of the day. Meditation should be, at first, active, using the imagination and not contemplation.

Three, make a schedule. Benedict, as I have noted elsewhere, invented time management. Without a schedule, there is no discipline for prayer and work.

Four, understand that the prayer time overflows into the work time, if one can maintain both silence and a reflective manner and mood. Talking ruins the rhythm of work and prayer.

Five, cultivate silence in the home, even with children. Children do not have to be loud all the time. They, also, need to learn reflection and being silent, which is possible at ages earlier than most people realize.

Six, get rid of the television. As Thomas Merton notes, we are geared to passive intake of knowledge, which happens at the contemplative stage, but if our minds are full of goo from the television, we shall never learn either meditation or contemplation.

Seven, stay in one place, or simplify your travel. This is very hard in our day because of the need for commuting, but one must learn to be still and stay put.

Eight, learn to cultivate the quiet space in your mind and soul and not to let things around distract you. This requires patience and practice, but is a very useful tool for praying during the day.

Nine, value working with your hands. Sewing, cooking, gardening, cleaning, etc. can all be part of the rhythm of prayer and work. Benedict knew the value, as well as the necessity, of labour.

Ten, do not pretend to be a hermit. Being a recluse does not automatically make one holy. One is made holy in relationships with other people and with God.

Twelve, have family meals together and discuss things quietly. Try to discuss God and holy things.

Fourteen, be honest with yourself and others in your family or circle of friends. Humility is the mark of the Benedict soul.

Fifteen, never pass up the chance to go to frequent Confession and daily Mass is possible. Pray at least morning prayer or evening prayer as in the Breviary. Make a habit of prayer.