More power to POTUS? I am Spartacus...

Posted by Supertradmum
Is Congress going to give Obama more power?   Where is the rebellion?

Link above. This is scary. Why give POTUS more power for anything before Congress knows exactly what he is going to do with it?

Have we become completely lost to a historical perspective? This is how tyrants of old, even in the 20th Century, gained power, by seeming to be streamlining bureaucracy, but in reality, creating a top-heavy system. The Constitution limits the power of the president and that political philosophy should remain strong and clear and in place. Americans impatient for change only have to vote accordingly in November.

New, not so revolutionary or reactionary, order at Maynooth

Posted by Supertradmum
St. Patrick's College, Maynooth has a few new items of order which will help the seminarians have an identity separate from the rest of the college. Now, I taught in a seminary which was in the middle of nowhere in the United States, which many, but not all, are. This move to help the sems have their own space and create more of a community among themselves is a good thing. One wonders why it was not more obvious until now. Here is the rest of the story: Changes

Posted by Supertradmum
Ambassador Tim Fischer noted in the press today here in Ireland that the lack of a diplomat in Rome is a problem. Here is part of his statement: "The Vatican is not entirely a closed shop, but you have to know where to look, which conferences to attend, which contacts to pursue.  And if you’re only flying in for four times a year from Dublin or from the Hague or from Geneva, then that becomes very difficult to do in a comprehensive and professional way,” he explained in an interview with CNA.

He added that, being so close to the Vatican allows governments to tap into an unparalleled diplomatic network. "
“It is the oldest organisation in the world, and it does have a huge network,” he said.  In fact, “as recently as the Balkans War, some of the best information as to what was really happening on the ground was not held by the CIA or the KGB but, in fact, right here in Rome by the Holy See.”

As most know, the Irish government pulled its Embassy staff from Rome last year. Fischer also stated that is was the opinion of most diplomatic staffs that the Irish move was political and not budgetary. Are we surprised?

The Hammer of the Heretics 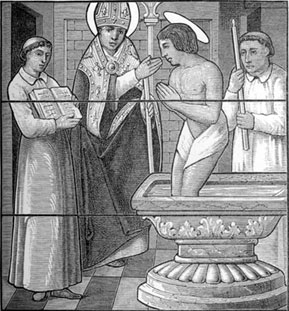 Today is the Feast of St. Hilary, Doctor of the Church, and Hammer of the Heretics. He was not afraid to excommunicate the Arians, possibly the largest group of heretics, until modern times, who were publicly against him and the Church.. He was, for four years, exiled  by the Arian supporters in the government. Not only did he write doctrinal treatises, but apologetics against the Arians. He encouraged the setting up of at least one monastery by Martin of Tours, whom he baptized (picture), and, although none of his works are extant, wrote Latin hymns for liturgical use.

Hmmm...where are the Hammers of the Heretics? We have a few.

What people forget is that heretics are in the Church, not outside it. Heretics are Catholics who are not in obedience to Rome on a subject, such as those errors leading to liturgical abuse. We have developed in the Church a laxity toward heresy to the point where it is hardly noticed in some places. This laxity has come from poor catechesis and an emphasis on the experiential rather than the doctrinal. St. Hilary would be working hard writing and preaching today against Modernism and liturgical abuses.

I always liked this day as it was the traditional starting of the new term-at Oxford and at Dublin. Hilary's Term was based on an earlier legal system from England, the courts running from January to April. January is a special month in my family, as four of us have birthdays and my parent's have their anniversary in this month. St. Hilary's Day adds to the festive character of January.

St. Hilary, send us new and strong bishops to lead our Church in these heretical times. Here is a selection from the TLM reading from Timothy:

..preach the word: be instant in season , out of season: reprove, entreat, rebuke in all patience and doctrine. For there shall be a time when they will not endure sound doctrine, but according to their own desires they will heap to themselves teachers, having itching ears, and will indeed turn away from hearing the truth, but will be turned unto fables.