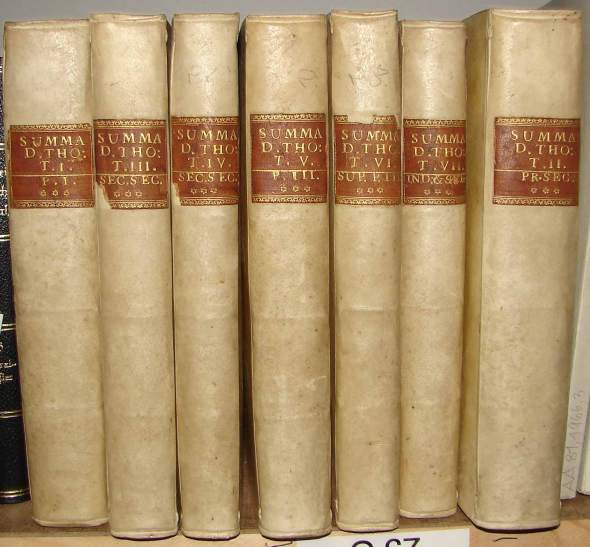 Until I can get my stuff in storage--like my Aquinas....

Remaining in the Truth of Christ

The Keys of This Blood...to see Martin's take on Gramsci, which is great and true.

The Three Musketeers, as I love Dumas (see other posts on him) after a few years of not reading him...

6 Is not this rather the fast that I have chosen? loose the bands of wickedness, undo the bundles that oppress, let them that are broken go free, and break asunder every burden.
7 Deal thy bread to the hungry, and bring the needy and the harbourless into thy house: when thou shalt see one naked, cover him, and despise not thy own flesh.

Hello to Readers in Ukraine

Posted by Supertradmum
Thank you for reading this blog.

Hello to Readers in Germany

Posted by Supertradmum
Thank you for following this blog.

Posted by Supertradmum
Some people are criticizing Mr. Voris regarding his take on Father Hesburgh. Mr. Voris speaks the truth, which we all need to hear.

I was at Notre Dame from January, 1979 to September, 1984.  I can testify that this priest was not faithful to the teaching of the Catholic Church, and in fact, ruined the Catholicity of that once great light in the darkness.

Pray for this priest, for his immortal soul. Many of us orthodox Catholics were personally afflicted for our stands in the classroom because of the atheists who were teaching us at Notre Dame.

I was told by the head of my graduate department,an atheist, ex-priest and a Marxist, to my face, that "One cannot be a Catholic and a scholar in the 20th century." I told him that there was two-thousand years of history to prove him wrong.

He, among others, was a Hesburgh appointment.

The doctors in the university clinic asked every woman and girl coming to them if they wanted contraceptives.

Enough adulation for a priest who did not love the one, true, holy, Catholic and apostolic Church.

We all knew his duplicity when I was there. We understood and saw clearly the hypocrisy. I can say for sure that Notre Dame and the two-faced Catholicism of those days stopped my career in higher education in America, and caused others to leave who should have stayed and carried on.

Do not kid yourselves that the lack of faith of both Fr. McBrien and Fr. Hesburgh affected thousands of students throughout the years to not only become liberal Catholics, but finally to leave the Faith.

God expects public penance for public sins. Reparation was never made by these two prominent priests who chose status, fame, wealth over the simplicity of the Gospel; they did not love Holy Mother Church.

I pray that St. Andre Bessette intercedes for Fr. Hesburgh. The contrast between these two men, one a saint, could not be greater.

Pray for the protection of this man....he is in the right

We have an executive branch making decisions concerning arms and wars without the knowledge or approval of Congress-and this is against our constitution.

Society for the Protection of Unborn Children and Voice of the Family
are pleased to announce a talk by
His Eminence Raymond Leo Cardinal Burke
Patron of the Sovereign Military Order of Malta
REMAINING IN THE TRUTH OF CHRIST ON HOLY MATRIMONY
Abbey Suite, Chester, DoubleTree by Hilton Hotel, Warrington Road, Chester, CH2 3PD
Friday 6th March at 7pm
All are welcome!
***
During his visit to the UK His Eminence will offer Holy Mass in the traditional Roman rite
at the following locations:
8th March at 10.30am, SS Peter, Paul and St Philomena, New Brighton
9th March at 6.30pm, Shrine Church of St Augustine, Ramsgate
For more information, please contact: 02078203148; mariamadise@spuc.org.uk

Neo-Pagans are in trouble.

They are not in the same position as the pagans before Christianity. As many theologians have pointed out that ancient "religions" prepared people for Gospel message. Shades and hints of Christianity were buried in the ancient myths.

To leave Christianity for paganism is a much more serious sin than those original pagans who did not have the advantages which we have today.

The attraction to paganism comes from a spirit of rebellion. Pray for those young people who are drawn to all the horrific neo-paganism which surrounds them. One simply cannot flirt with any sort of paganism.

Still, there are many Catholics who do not realize that we live in the City of Man, which is antithetical to the City of God. Early Christians, who had not yet seen "Christendom", understood that they were living in enemy territory. The demonic gods of the pagan worlds dominated society at all levels. Christians lived by the strength of their baptismal graces, which give one more power over darkness when one is living in the light of such sanctifying grace.

I have met too many people who think they are living in safe lands. Like the Hobbits at the start of their journey, some people are cooking on Weathertop, sending huge signs to the enemy as to their whereabouts. Unable to make the transition from false safety to dangerous journey, they continue as if the times were presenting the same-old security of the past.

Poor Aragorn, trying so hard to protect the naive Hobbits, had to then save Frodo from death after the horrendous attack. This attack would have never happened if the party of Hobbits had been prudent and alert.

Cooking on Weathertop is not an activity those in the Early Church enjoyed. They were on the alert, not only because of persecution, but in order to avoid occasions of sin. We daily pray to Our Father, "And lead us not into temptation, but deliver us from evil". The assumption must be that we do not then place ourselves in the presence of evil and then expect God to save us. The sin of presumption covers this attitude.

No longer can Catholics remain naive. One must remove one's self from danger but not cooking on Weathertop. At no time, can one put down one's spiritual defenses.

We are in a war, the war for our souls. Some of us are on the front lines, some in the middle of the units, some in the back or on the sides. None are excused from this battle.

For some reason, people seem nostalgic about the past and believe there was a time when the Catholic Church was not fighting for her very presence in the world.

For over 1,300 years, Christians fought the Muslims. That group was only one of many enemies of the Church. Catholics lost the battle in England and the other countries which became Protestant.

This battle for the hearts, minds and souls continues unabated. Those who think they can take catnaps in the trenches simply do not understand what is at stake.