Posted by Supertradmum
Happy Father's Day to all fathers, especially to God, Our Father, Abba, Who sent us Christ in order that we might know Him, love Him and serve Him in this world, and be happy with Him in the next.

We are so fortunate to belong to a Church, the one, true religion, to which a loving Father-God has revealed Himself. We are His children by baptism, and the heirs to heaven. Thank Him for His great Mercy in giving us life, the Church, His Son and the Holy Spirit. Also, thank Him for giving us each other, our brothers and sisters in Christ.

On Gramsci and Education 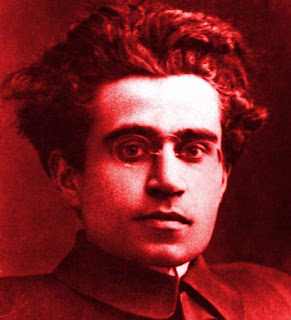 I wonder if it is a lack of perfection to write about Gramsci on a Sunday post? Well, I have not mentioned him for awhile and unless I lose my Post-Post-Modernists, I thought I should reveal some more of his copious notebooks. A very learned friend of mine said two weeks ago that she thought Gramsci should be considered a "professional radical".


"History of the intellectuals. Struggle between church and state."


"This struggle assumed a different character in different historical periods. In the modern phase, it is the struggle for hegemony in the education of the people; at least, this is its most salient characteristic, to which all others are secondary. It is therefore a struggle between two categories of intellectuals, a struggle to subodinate the clergy, as a typical category of intellectuals, to the directives of the state, that is, to the directives of the dominant class (freedom of teaching--youth organizations--women's organization--professional organizations)."


Can't have a Gramsci quotation without him mentioning hegemony.


Taken as an institution created by Christ on earth to lead men and women to eternal life, there is a hegemony, the dirty word of the Marxist, given to the Church. This rule, this imperial rule of men's hearts and minds finds its roots in the Old and New Testament-the Kingdom of Israel was a real place, just as the Kingdom of God, the Church, is a real place.

Now, as this hegemony is spiritual and interior, Gramsci's argument is flawed, as his only reference is materialism. So, the power struggle for him is purely historical and physical, not being able to see or believe in the invisible realm of spiritual warfare. But, Gramsci correctly sees that the Church is in a battle for the cultural and mental dominance of mankind.

This dominance, we know, is connected to our assent of belief and rests in free will.

Obviously, he does not believe that and merely sees the subjugation of humans to imperialistic powers. He knows and explains that hegemony must be over all aspects of life: education, literature, music, morality, ethics (not the same thing), military, political and governmental life. Hegemony of one class over another is always decided by the Marxist. Which group controls the other groups is based on the type of Marxism--Gramsci wanted to develop an intellectual working class. He thought that such a group would counteract the hegemony of the Church.

Hegemon is, as you can see, a Greek word meaning "leader" or "superior state", hearkening back to the dominance of one city-state over another in the ancient Greek world.

States within states include the Church, but those who do not believe that the Church is the foremost and only divine institution (sorry, monarchists, but even the ancient prophets tried to talk the Jews out of a monarchical system). The radical feminists use the term as in "hegemonic masculinity", seeing patriarchies as threats to real freedom, as in gender studies, the male always is the suppressor of the female. I am sure some of this philosophical/sociological jargon will be bandied about the upcoming synod in GB.

Why the Church is a threat to the State is behind Gramsci's entire argument concerning which hegemon should be in power at any given time. Part of his argument lies in the fact that the Church sided with either emperors or kings in the 19th century as against atheistic rebellions in Italy and France, as well as Austria. Gramsci mentions several times that he likes the Church in a defensive role against the liberal, and new states, as in the movements in Italy and Spain.

My emphasis, as an educator, is always going to be on education and the hegemony theory.


"Past and present. Religion in the schools."


"This is why, following the Gentile reform, the new school curricula assign art and religion solely to elementary school, whereas philosophy is entrusted for the most part to secondary school. In the philosophical rationale of elementary curricula, the words 'teaching of religion is considered to be the foundation and the summit of all primary education' mean precisely that  religion is a necessary but lower category that education must pass through because, according to Hegel's notion, religion is a mythological and lower form of philosophy that corresponds to the mental capacity of the child, who is not yet capable of rising to the level of pure philosophy--into which, at a later stage, religion must be absorbed and resolved. Let us point out straight away that in fact this idealist theory has failed to pollute the teaching of religion in the elementary school by having it treated as mythology. It has failed because the teacher either do not understand or they do not care for such theories and also because Catholic teaching of religion is intrinsically historical and dogmatic and the curricula, texts and teaching are externally supervised and directed by the church. Furthermore the words, 'foundation and summit' have been accepted by the church in their obvious meaning and repeated in the concordat between the Holy See and Italy, according to which....religious instruction is extended to the middle schools. This extension is now thwarting the aims of idealism, which wanted to exclude religion from the middle schools, where philosophy alone would predominate--a philosophy destined to supersede and absorb the religion learned in the elementary schools."


What the Gramscians did not accomplish, Dewey and the liberal element of the Catholic Church did.

Ponder, please. This is why I home schooled, as even Catholic schools have succumbed to these ideals.

A Fun Competition--Name and Place the Church

Posted by Supertradmum
Put your answers by number in the comments. You may guess or look these up.

More to come and winner gets one decade of the rosary said for him or her! You can cheat and use the Net. I may do this again, as it looks like a fun exercise.....If you have been following this blog, you have an advantage.

More on the Swedish Homeschooling Case

Posted by Supertradmum
I wrote about this case in an earlier post. LifeSiteNews has an update.

June 15, 2012, (LifeSiteNews.com) –  A Swedish homseschooling couple may shortly be reunited with their son after a prolonged separation, after a Swedish court has judged that the couple did not act irresponsibly by removing their children from the public school system.
Government officials seized Christer and Annie Johansson’s 10-year-old son, Domenic, in June 2009 as they boarded a plane for Annie’s home country of India. Domenic, who was seven at the time, has been in state custody ever since.
“We will ask the court for the immediate return of Domenic Johansson to his parents,” said Ruby Harrold-Claesson of the Nordic Committee on Human Rights, who represents the parents. “Based on the information in this verdict, there can be no justification for keeping this family apart.”
The U.S.-based Alliance Defense Fund and Home School Legal Defense Alliance are providing legal advice.
“The government shouldn’t abduct and imprison children simply because it doesn’t like home schooling,” said ADF Legal Counsel Roger Kiska. “This family’s human rights have been unimaginably violated.”
HSLDA Director of International Relations Mike Donnelly agreed the case was “a grotesque abuse of their human rights.”
“Domenic has not been returned home yet, but we have every hope that he will be soon,” he said.
The child has been in state custody for three years with limited visitation from the parents, while the state has considered terminating their parental rights altogether. Authorities jailed Christer after he took his son on an unauthorized outing in December 2010.
According to Crisis magazine, the years-long separation led Annie to have a nervous breakdown.
Meanwhile, the Scandinavian nation has cracked down on homeschooling, allowing it only under “extraordinary circumstances.”