Please pray for our friends in Gibraltar

And the BBC still sides with the Muslim Brotherhood....

Statement from the Pope, please-nuns paraded as prisoners of war in Egypt

Use your Guardian Angel.

Too many adults forget to pray to their angels.

Angel of God,
my guardian dear,
to whom God's love commits me here,
ever this day,
be at my side
to light and guard,
to rule and guide.

St. Francis understood, as did most saints, the importance of contemplating the Crucifixion of Our Lord. I hear excellent sermons here in Dublin, thank God. When was the last time you heard a sermon on the need to concentrate on the Passion and to endure, rather than change a state of suffering? Here is St. John of the Cross on the Dark Night again.

And thus it is fitting that, if the understanding is to be united with that light and become Divine in the state of perfection, it should first of all be purged and annihilated as to its natural light, and, by means of this dark contemplation, be brought actually into darkness. This darkness should continue for as long as is needful in order to expel and annihilate the habit which the soul has long since formed in its manner of understanding, and the Divine light and illumination will then take its place. And thus, inasmuch as that power of understanding which it had aforetime is natural, it follows that the darkness which it here suffers is profound and horrible and most painful, for this darkness, being felt in the deepest substance of the spirit, seems to be substantial darkness. Similarly, since the affection of love which is to be given to it in the Divine union of love is Divine, and therefore very spiritual, subtle and delicate, and very intimate, transcending every affection and feeling of the will, and every desire thereof, it is fitting that, in order that the will may be able to attain to this Divine affection and most lofty delight, and to feel it and experience it through the union of love, since it is not, in the way of nature, perceptible to the will, it be first of all purged and annihilated in all its affections and feelings, and left in a condition of aridity and constraint, proportionate to the habit of natural affections which it had before, with respect both to Divine things and to human. Thus, being exhausted, withered and thoroughly tried in the fire of this dark contemplation, and having driven away every kind148 of evil spirit (as with the heart of the fish which Tobias set on the coals149), it may have a simple and pure disposition, and its palate may be purged and healthy, so that it may feel the rare and sublime touches of Divine love, wherein it will see itself divinely transformed, and all the contrarieties, whether actual or habitual, which it had aforetime, will be expelled, as we are saying.

This exhaustion results from the death of self, the removal of what St. John calls the contrarieties, and the destruction of the ego. One is being prepared for love, in much the same way that Esther was prepared for a year with baths and perfumes, good diet, and training for her marriage to the King. Substantial darkness allows substantial purification. To be continued.... 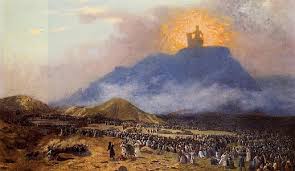 St. John of the Cross notes that the Israelites could not enjoy the taste of the manna and complained for meat because they had ruined their taste by the excesses of food in Egypt. Even though they were slaves to the Pharaoh, they ate the food of Egypt.

Now, the upper classes, according to archaeologists, enjoyed meals with these ingredients (and this site is great for home schoolers, btw):

The food of the slaves would have included beer rather than wine, but meat and fish as well as onions, cucumbers, leeks, melons, garlic and seasonings would have been eaten. (It is interesting that three members of my family, including me, are allergic to the food family of Cucurbitaceae, a normal food family for the Egyptians of these times.)

When the Israelites complained of manna, God sent quail. But, St. John's point is that the years of slavery had deadened the Hebrews taste for manna.

The spiritual connection he makes may be applied to youth who say they are bored at Mass, a statement which is symptomatic of a spiritual problem. The Israelites did not merely complain about food and water. They also murmured against the fact that God spoke to Moses, which is spiritual envy, that God killed the bad leaders, such as Korach and folowers, that Caleb exhibited no fear and great joy in the planning of the overthrow of the Canaanites, this last being the sins of fear and negativity, revealing a serious lack of faith.

Here is St. John:  For, even as the children of Israel, solely because they retained one single affection and remembrance—namely, with respect to the fleshpots and the meals which they had tasted in Egypt146—could not relish the delicate bread of angels, in the desert, which was the manna, which, as the Divine Scripture says, held sweetness for every taste and turned to the taste that each one desired;147 even so the spirit cannot succeed in enjoying the delights of the spirit of liberty, according to the desire of the will, if it be still affectioned to any desire, whether actual or habitual, or to particular objects of understanding, or to any other apprehension. The reason for this is that the affections, feelings and apprehensions of the perfect spirit, being Divine, are of another kind and of a very different order from those that are natural. They are pre-eminent, so that, in order both actually and habitually to possess the one, it is needful to expel and annihilate the other, as with two contrary things, which cannot exist together in one person. Therefore it is most fitting and necessary, if the soul is to pass to these great things, that this dark night of contemplation should first of all annihilate and undo it in its meannesses, bringing it into darkness, aridity, affliction and emptiness; for the light which is to be given to it is a Divine light of the highest kind, which transcends all natural light, and which by nature can find no place in the understanding.

Now the focus on changing liturgy to appeal to youth is misguided and has been since the 1970s. The focus is on the outside of the person rather than the inside.

Children need to formed young, very young. Parents have a duty to not allow the fleshpots of Egypt ruin the taste of spiritual things in their children.

Formation cannot be started in adolescence.

May I offer some formation tips for children?

One, as early as possible, prayer daily with the children. Pray over them and bless them at night. Make sure there is a rhythm of prayer in the family. Take them to Adoration weekly with you. Also, take them to Confession regularly with you.

Two, read the lives of the saints and the Bible daily with them. Cultivate a love for their patron saints and their guardian angels.

Three, do not let them go to state controlled Catholic schools where the curriculum is not Catholic. Catholic curriculum must include all liberal art and science studies from a Catholic point of view.

Four, train them to use the virtues given to them in baptism for a very early age. I wrote a curriculum on virtue training for pre-schoolers and early elementary students. Sadly, I do not have it with me, but a parent could develop this by using The Book of Virtues and other texts. If God allows me to ever get my notes and discs out of storage, I shall share this curriculum with you. I taught it to a group of teachers in a pe-school and grade school years ago.

Five, pay close attention to the spiritual formation of your children by spending time with them. Remember that unless the parents are the primary influence, other influences will be stronger in the formation of their thinking.

Six, do not let the fleshpots of Egypt ruin their taste for normal, daily liturgy. Take them to the Tridentine Mass, if possible, as the spirituality of that Mass is deeper and more challenging, which is a good thing for youth.

The boredom of youth is like the complaining of the Israelites in the desert. It is actually sinful, and reveals a jaded spirit. Parents must pray and help the young persons unravel the source of that boredom instead of pandering to it by emphasizing externals instead of internal growth.

Except for the very few, the generation which came out of Egypt were forbidden by God to go into the Promised Land. They died in the desert for idolatry and murmuring against God and His prophet-leader, Moses. Their deaths provide an allegory for the death of the soul. That Joshua, a man pure of heart and full of the love of God, brought the next generation into the Promised Land reminds us that one must pursue purity of heart in order to be an excellent parent, capable of leading the children to heaven. Hard work and diligence....formation of the soul begins in the womb and cannot be delayed until adolescence.

If your child moans about boredom, talk to that child about his spirit, what he thinks he wants, and pray for discernment. Boredom is a symptom, always, of a restless soul and not a mark of a person moving in the spiritual life towards holiness.