Forgive us as we forgive those who sin against us....a repeat posting as it is necessary

Posted by Supertradmum
I repeat this January post, as after three months, the Republicans I have met continually hate the British for past sins against the Church, forgetting that the Catholics in Britain also were painfully persecuted. That Irish Catholics constantly, and I mean daily, if not weekly, brought up the Troubles to me, is a proof of a lack of forgiveness on their part. This must end. Do they not realize that they are being formed by their hatred? "Great hatred in a small place..." William Butler Yeats. Here is the repeat post.


Last night in Londonderry, two Republican bombs were exploded. People in the area were evacuated quickly. This was not the headline in this morning's issue of the Irish Times online, but in the Wall Street Journal.

In the month I have been here, I have, almost daily, heard people, including women, go on about British occupation. I am sick of hearing about The Troubles. I am sick of the unforgiveness among Catholics, who like the "moderate" Muslims, do not condemn sectarian violence. Ireland is rotting from the inside out from hatred, prejudice and unforgiveness.

I lost family in both world wars. My grandmother's family, in what is now the Czech Republic, disappeared and their houses and land, and some were wealthy, confiscated by, first the Germans and then, the Russians. We assume many members of the family, most politically active, perished in the Holocaust. Some of my ancestors were Jews from Bratislava. We never knew what happened. I do not hate Germans and I do not hate Russians. I have personally experienced betrayal from someone I thought was my best friend, not once, but more than once. I forgave. I had to do so, as I was commanded by God to forgive. If we are obedient, we forgive. 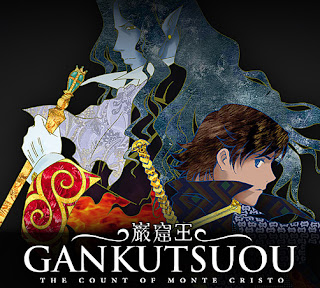 I am reminded of the anime Gankutsuou: The Count of Monte Cristo. It is a powerful story based on the Dumas novel of hatred and revenge. It is terrifying. It is "true". In the anime version, the Count is overtaken by a demon. But, he already had some-the demons of revenge and unforgiveness. Thankfully, there is redemption at the end. That is what we desire, redemption, not revenge.

Four members of my family were abused by a priest for years. These family members never sued, and are still Catholic and raised their children Catholic. They forgave. They exhibit heroic virtue, as we all must.

Forgiveness is the necessity of all Catholics, all Christians, all Jews. Those who do not forgive will not see the Face of God. Matthew 6:15 But if you will not forgive men, neither will your Father forgive you your offences.

God said that. He means it. The evil of unforgiveness is that we become God. We play God. Here is the Count in the anime speaking:
Count of Monte Cristo: No show is as captivating as the death of a human being.


Count of Monte Cristo: Is it not as though we have become God?
I call this Evil. Like Lucifer, the Count was playing God.

Living among a people who dwell in unforgiveness is something I could not do for any length of time. I have never met, in modern times, people more prejudice than the Irish Republicans, and I lived in Missouri and Mississippi. The language of hate is in the speech like a reoccurring motif in poetry-except that it is deadly to those who speak it. Forgiveness creates healing. Forgiveness opens the door for reconciliation. It does not matter what or who on "the other side" do or not do. The power of forgiveness is in our hearts to use or not to use. Politicians here use the language of hate towards the Church, as the land is full of hatred. The beauty of Ireland is hidden in the fog of unforgiveness.

On the radicals who want the Church to sell everything...

Posted by Supertradmum
OK, because this has come up too many times, I need to write about it. There are young people and old alike that think the Church is extremely wealthy and that all the lands, including the Vatican, should be sold and the money given to the poor. There are some who do not think the bishops should wear mitres or have rings with precious or even semi-precious stones. 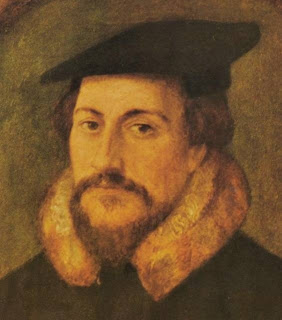 Well, where do I start? First, the Institutional Church is a physical Church and not the "invisible Church", a phrase I referred to before as heretical, on this blog. Christ is Man and God and He created a hierarchical structure which is real, one can smell, touch, see, etc.

We are physical and spiritual entities. We are human.

Second, the Church is not wealthy. Having property does not make one a wealthy person, contrary to popular belief. In fact, the upkeep of property can positively be a drain on resources and cash.

Third, the aesthetically real experience frequently leads us to God, and God deserves the best we can offer of art and architecture. Only Puritans, or Calvinists, to be exact, disdain the Beautiful. God is Beauty. Our small, pedestrian minds and hearts should be raised up to God through Beauty. See my long January posting on this fact. http://supertradmum-etheldredasplace.blogspot.com/2012/01/thoughts-on-beauty-and-tridentine-mass.html 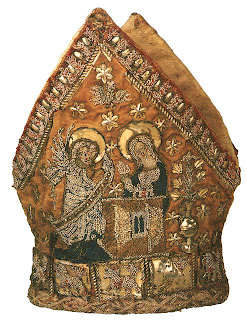 Fourth, Christ Himself said the poor are always with us, period, as they are our responsibility. However, ghd poor are not an institutional problem. That is socialism. We are to take care of our brothers and sisters in Christ, not an institution. And, Catholics fail on this point miserably. In fact, the very people who have been criticizing the Pope or the bishops for their miters and such, are the ones who do not involve themselves on a daily basis with the poor. God wants us all to respond in the best way we can, but to loudly proclaim that the Church should divest itself of religious symbols which include the signs of the Church Triumphant, is just plain heresy.

I can partly understand this false argument when young people who are over-zealous see the Church as some sort of treasure house of riches, but for older, middle-aged persons to go on about this seems blatantly stupid.