We Must Forgive and Forget. We Must

Posted by Supertradmum
I have written about forgiveness on this blog many times. I have noted the hatreds of even Catholics towards national enemies. I am sick to death of forgiveness which passes for patriotism.

If Catholics or Muslims do not forgive, then we shall not inherit the Kingdom of God. Salvation only comes to those who forgive and not those who hate.

I have written much about the litany of hate I have heard from the Irish. I am writing about the litany of hate I am hearing against the Jews. Anti-semitism is alive and well in Europe and the non-Jews cover it up with politically correct nonsense about "radicalized" Muslims or the history of Palestine. If those in power or around the table insist on remembering past sins against their peoples, we shall only repeat the past. I have even heard hatred for Germany, who has bailed out the very countries who now seem to resent the bail-outs. In Iowa, we call that biting the hand that feeds one.

Hatred does not create, only destroys and it destroys the soul of those who continue in that national, historical and philosophical hatred. The children in France would not have been killed except for political correctness and no one cares about the military men who were killed. In fact, the lack of investigation about those murders led directly to the horrible murders of those beautiful children.

I have referred to the anime, The Count of Monte Cristo before as well. The Count was almost damned by his unforgiveness. This can happen to anyone.

Christ gives us clear words on forgiveness. We have the words of the Our Father. We shall not get to heaven with vengeance and hatred in our hearts.


And be ye kind one to another; merciful, forgiving one another, even as God hath forgiven you in Christ.
Ephesians 4:32

Yet another terrorist who has not been labeled such in the past....and he killed as he was not investigated thoroughly

Posted by Supertradmum
Surprise, surprise, the man arrested for the murders of soldiers and three Jewish school children and a parent, is a terrorist. When will Europe, and France, wake up to profiling? If the first military murders would have been investigated in the complete way the murders of this past week were done, this man would have been found earlier.

Let us stop pretending at the reality of more of these types of murder not happening again....Note the section from this site--the Telegraph online.http://www.telegraph.co.uk/news/worldnews/europe/france/9157126/Toulouse-siege-live.html

13.14 The Telegraph's Ben Farmer reports from Kabul that Merah fled Sarposa Prison in Afghanistan in June 2008 after a Taliban attack.

Ghulam Farouq, general director of Kandahar prison, said Mohammed Merah, son of Mohammed Siddique, was arrested sometime in 2007 while working with Taliban insurgents as a bombmaker.
He spent around a year in the Sarposa Prison on bombmaking charges before he and hundreds of others escaped on June 13, 2008 in a huge breakout. Up to 1,000 inmates, including 350 Taliban militants escaped that day when a suicide lorry bomb breached the prison walls and up to 30 Taliban fighters then attacked and helped inmates escape.......
The daily Le Monde said Merah had trained with Pakistani Taliban fighters in a border tribal zone before being sent into southwestern Afghanistan to fight against NATO forces supporting the Kabul government.
French troops are part of that NATO operation, which may explain why the first victims of the gunman's killing spree were serving paratroopers killed in Toulouse on March 11 and Montauban on March 15.
French intelligence sources said about 30 French fighters trained by the Taliban were believed to have taken part in attacks on Western forces in Afghanistan. 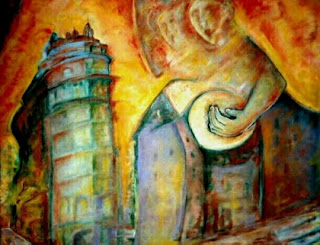 Go to this site to see the beautiful photos of the children killed. Explosives were found in the suspect's apartment today.

Posted by Supertradmum
Today in the Tridentine Calendar, the Benedictines celebrate the Feast of St. Benedict. His gifts to Western Civilization are enormous, including the Rule, the monastic system we take for granted, and the European-wide establishment of schools. As a Benedictine at heart, I have nothing but admiration and praise for this man, who is one of the Patrons of Europe, along with SS. Cyril and Methodius. Pray to him for humility this Lent. He has in his rule a list of goals for those who aspire to that virtue. One is considering one's self inferior to all others. For some, this is not hard, as one may feel like a failure in life and see one's inadequacies. For others, this is a challenge, to see the worth of those around them. I highly suggest reading the Rule for Lenten reading.There is also a daily reading from the Rule on this website, for those who do not have the time to sit and read the entire book, although it is very short. Here is today's reading:

Chapter 42: That No One Speak After Compline

Monastics ought to be zealous for silence at all times,
but especially during the hours of the night.
For every season, therefore,
whether there be fasting or two meals,
let the program be as follows:
If it be a season when there are two meals,
then as soon as they have risen from supper
they shall all sit together,
and one of them shall read the Conferences
or the Lives of the Fathers
or something else that may edify the hearers;
not the Heptateuch or the Books of Kings, however,
because it will not be expedient for weak minds
to hear those parts of Scripture at that hour;
but they shall be read at other times.
If it be a day of fast,
then having allowed a short interval after Vespers
they shall proceed at once to the reading of the Conferences,
as prescribed above;
four or five pages being read, or as much as time permits,
so that during the delay provided by this reading
all may come together,
including those who may have been occupied
in some work assigned them.
When all, therefore, are gathered together,
let them say Compline;
and when they come out from Compline,
no one shall be allowed to say anything from that time on.
And if anyone should be found evading this rule of silence,
let her undergo severe punishment.
An exception shall be made
if the need of speaking to guests should arise
or if the Abbess should give someone an order.
But even this should be done with the utmost gravity
and the most becoming restraint. 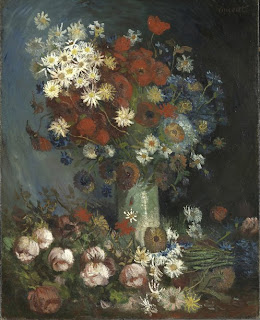 Every once in awhile, an exciting find or re-discovery happens in the world of art. This painting has been proved to be a Van Gogh. It is lovely and exuberant. I am so happy to be studying it today, as it is quite refreshing. I am very pleased with the old roses. Here is the report from the Museum.

I particularly like the roses in this painting. Somehow, the freshness and life of this painting shows us another side of the tormented Van Gogh. May he rest in peace.

Pope's Itinerary to Mexico and Cuba and bits of news... 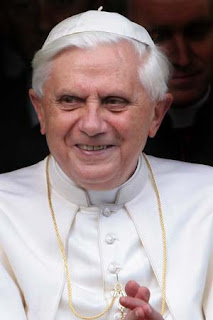 The Pope is going to Mexico soon and will meet some of the most anti-Catholic politicians in the world. On the various websites around the world, many news items are coming out. Here is one on the drugs cartels calling a truce. However, the number of babies aborted since Mexico City approved abortion in 2007 is 75,000.

Two websites provide insights into the horrendous problems in Mexico. One is here.
. 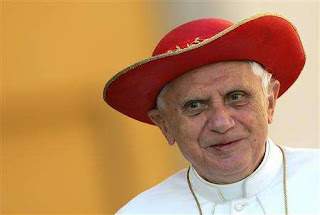 The Knights Templars drugs cartel is calling a short truce -- but only to welcome Pope Benedict XVI to Mexico, an official said Sunday.
"They did put up signs announcing this," a Guanajuato state government source told AFP privately.
"The Knights Templars are holding off on all violent action, we are not killers, welcome to the pope," the official said paraphrasing one of the signs put up in the town of Irapuato, Guanajuato state.
The signs were seen in at least seven towns statewide.
The pope arrives March 23 in Leon, in the neighboring state of Michoacan, where the Knights Templars were founded.
President Felipe Calderon has launched a military crackdown against the cartels battling it out for control of the lucrative drug trade, in which some 50,000 Mexicans have lost their lives since 2006.
And, here is another article on the Pope's itinerary. The schedule for the Holy Father's forthcoming visit to Mexico and Cuba from the 23rd to the 29th of March 2012 has been released. Pope Benedict will depart on Friday 23rd of March from Rome’s Fiumicino airport on ruote to Mexico. On arrival at Guanjuato International Airport the Pope will be greeted by dignitaries. Highlights on Saturday 24th of March will include a courtesy visit to the Federal President of Mexico at Conde Rul House in Guanajuato.
Later in the evening the Holy Father will greet children in Guanajuato’s Peace Square.Following the celebration of Holy Mass on Sunday, March 25, in León Park, Pope Benedict will later that day celebrate vespers with the Bishops of Mexico and Latin America in the Cathedral of the Blessed Mother of the Light of LeonOn Monday morning March 26th the Holy Father will depart Mexico for Cuba arriving in the country in the mid afternoon. Later that evening the Pope will celebrate mass to mark the 400thanniversary of the rediscovery of the Virgin of Charity of Cobre in Cuba’s second largest city, Santiago de Cuba.The Pope will visit this shrine to Our Lady on Tuesday morning the 27th before departing for Havana.After paying a courtesy visit to the President of the Council of State and the Council of Ministers the Pope will meet with the Bishops of Cuba at the Nunciature in Havana.The Pope’s final full day of activities on Wednesday, March 28, will include Mass in Revolution Square in Havana.