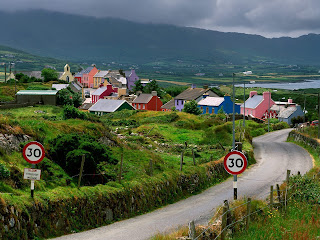 Travelling in the countryside of Ireland is going back in time. One cannot find the usual amenities of the city or even the towns of more advanced countries. Now, this can be an advantage or a disadvantage. For one who is trying to "get away" from the rat-race, Ireland, even Dublin, is a perfect holiday. For finding the simple life of daily Mass, Adoration and good, long walks in the rain, Ireland is a good place.

But, sadly, the personality of the people has changed. A friend of mine, who is Irish, moved to the States for about fifteen years and recently returned. He told me on Sunday, that when he returned a few years ago, he hardly recognized the country. It was not the usual sort of complaint, such as too much technology, as that is not the case here. It is not even the ostentatious wealth.(I have never seen so many Mercedes-Benz in such small communities, either seaside or even agricultural towns and villages, as I have here. And, I lived in West Kensington, in London.)

The change happened in the people themselves. The Irish hospitality to those from the outside is gone. The sense of humor we all have come to love and cherish is fading fast. And, the many local crafts and   traditional factories, which produced high-quality Irish goods, again, so prized among American housewives and families, are gone.

Another problem is the over-abundance of entertainment and pubs. I live near a pub, which is open daily until 3:30 am, and packed. I come from the Bible-belt in Iowa and where I come from, this would be seen as excessive dissipation. It is. And, if a populace is working, how can they be in the pub so late?  The pride of place and the pride of local work is gone. There is no sense of real community, and the work and Faith which held these towns and villages together like glue have faded away.

I went to Notre Dame, and at the time, the gift shop was full of items made in Ireland. No more. I worked in Anchorage, Alaska, and knew a woman and her husband who had a fanstastic Irish import shop. They sold china, lace, hats, scarves, sweaters, rosaries, ties, you name it--all made in Ireland. No more. One has to go to the far-West of Ireland to find the real deal. I went into shops in Dublin, including cloths shops. Everything was imported. The talents of generations has been lost. This is all due to the EU.

Another loss is the influence of the priests. Now, I do not blame the priests for this, but the people themselves. They have fallen into the socialist mind-set that the government can and should do everything for the populace.

The noisy politicians are more Marxist than Catholic. The schools, catechesis and pulpit miss opportunities for teaching the real message of the Catholic Church. It is so sad. I am daily meeting adults who have had no adult catechesis and where there is no Bible or CCC in the house. 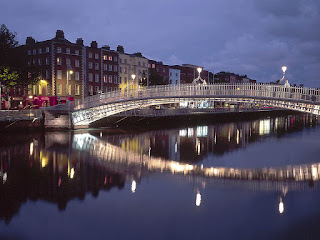 The soul of the country seems to be in great need of spiritual food as well. Now, my friends here are Latin Mass Catholics, a breed among breeds, hospitable, kind, prayerful, even deep spiritually. They are a minority here in that their children are going to Mass. They do more than the Sunday required Mass. They pray at home and with their spouses. They fast. But, they are so few, so few. This is the spiritual revolution Ireland needs. But, I am afraid, it is no longer Ireland. The Catholic Church was the life-blood of these good people. The blood is anemic.

Jesus Christ and the United Nations

Posted by Supertradmum
Pakistan has outlawed the Name Jesus Christ from twitters and cell messages. In order to give glory to Allah, who obviously is not God the Father, who is glorified in and with His Son, the Holy Name must not be used, typed, sent. 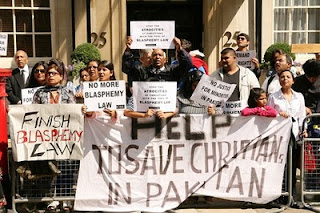 This law passed in Pakistan last year in November, but it is becoming an issue now as the United Nations (see my post below) is beginning to interfere with freedom of speech by supporting Islamic countries which as applying sharia law to cell phone use.

This topic has been ignored by the media. I have only seen this discussed in some Catholic newspapers and on WND last year. Why the silence? Why the support in the UN for such restrictive laws as coming out of Pakistan and China with regard to freedom of speech?

Those who are silent agree with these restrictions. And, going further than that, to uphold the so-called sovereignty of repressive regimes, which are gaining more influence in the UN, the sharia laws will be upheld in courts across the world.

Wake up, America. Our own government has said nothing on these restrictions.