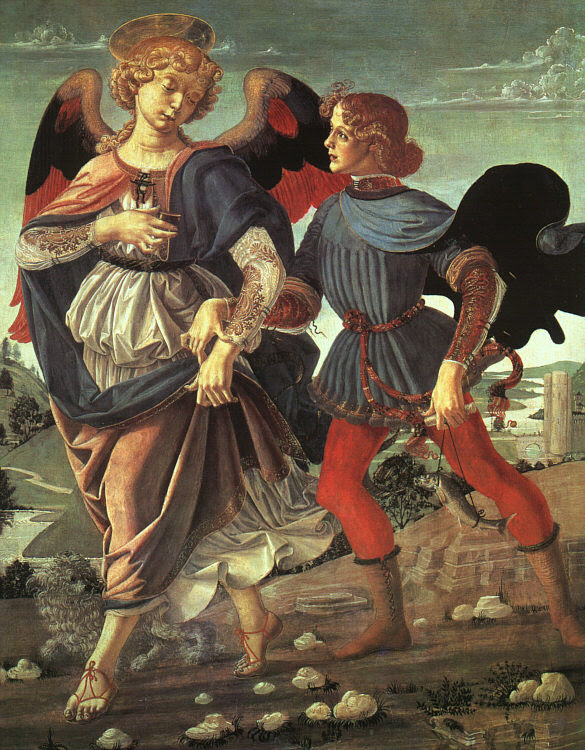 Twice I have met people who may not have been people but angels. I know this sounds odd, but we do have such an encounter in the Book of Tobit and the fruit of such meetings determines truth.

The first was last October, when I was staying in the monastery. A nun who was the superior of her order came to stay in my hall on a silent retreat. I was instructed not to speak with her, which was fine, as I was being obedient, quiet, and not inclined to speak with guests.

I shall not give all the very interesting details, but after 24 hours, she came to me and said she was at the monastery for me, and that she would speak with me daily. As I was getting no feedback at the time, I was delighted but puzzled.

After the ten days, much advice and counselling from her experience as a superior, and after many prayers for me, plus notes and letters, she left. She had a sense of humour and at least once, we had a great laugh.

She did not want me to join that order. She gave me a book she just happened to have about a priest whose ministry is writing.

When I finally left the convent, I phoned the order where she was superior. I phoned two of their houses. The order has no such sister of that name and no superior of that name.

I had a hard time understanding this. I began to review her contacts with me. She never ate or drank anything in front of me. She only talked of sensible and pastoral things, such as me getting more sleep and not pushing myself. She also taught me how to approach God in Adoration. She also gave me two cards with angels on them.

I think she was an angel.

Today, I may have had another encounter with an angel. I went to a local coffee house for an iced chai, which for some reason I was craving. I sat outside and an Irishman started talking to me.

He talked sense about everything political, obviously being a real Catholic, not a socialist, and one who could see the signs of the times. He was the first older Irishman bar one I have met who understands the way of the world. And, he told me Ireland has lost her identity, which was the point of two of my recent posts, here and on another blog.

But, what was so strange were two comments he made to me. I asked him what his job was and his reply was this."If I told you my job, I would no longer have it." So, naturally, I asked him if he worked for the government, and he said no very strongly.

I was puzzled, as this man, who told me he grew up in the country, who does not have a computer or never goes on the internet (amazing) could hold a 45 minute conversation on all the levels of moral decay, political ruin, and such in Ireland and the EU in detail. He was very strong against Masonic influence here. He was some type of genius outside the box.

Now, I suppose angels do not believe in luck, but they do act like normal people, as did Raphael, in the above book, who basically "lied" to Tobit about who he was-one of his first cousins once removed or something.

But, what journey did this person mean today?  I went back and thought about the strange encounter.

Bingo! My journey towards perfection. I have been bogged down in the awareness of sinful inclinations and whether I was too evil for God to answer my prayers. I have been in darkness for weeks. My "angel" was underlining something said to me in Confession this morning as well. God is in charge and His Divine Providence guides every prayer. All of our desires and prayers are in His Will, if we are allowing Him to guide us. We must persist in prayer and on the journey to perfection, even though we cannot see a thing, either physical or spiritual. Also, what happens around us is there to help us on our way.

We pray in the Will of God and act in the Will of God daily, if this is our desire and if we are willing to undergo purification. The outcome of this discussion was the welling up of the awareness of God's particular love for me.

I am so fortunate as to have found a holy, wonderful confessor as well. What a treat. He understands the journey of perfection, which is rare for priests.

I am fortunate that God encouraged me over chilled chai.  The handshake of this man was so strong I could hardly believe it. One never knows when one is entertained or entertaining angels.

I needed this little encouragement. By the way, this person had such a sense of humour, I was laughing off and on. He told me that the only two places which were the real Ireland were Dublin and Cork. He knew Cobh. He said all the rest was grass and wind.

He also said that the Irish say that  further west one travels in Ireland, the more one understands why the Wise Men came from the East.

Now, I am much more peaceful on my journey today after this odd encounter. I have been encouraged in my world view, to see the end of Western Civ and the downfall of Europe, which he prophesied, as part of God's Providence, and that good will come out of ruin. He also said all the countries would go back to being separate in order to find themselves....I think this is true. He knew all about the current corruptions of Europe and America.

He also said, (what we know on this blog), that the evil has come from poor Catholic education, bad priests, and evil politicians, as well as the greed of the banks.  He noted that he never used credit cards and was not in debt. (I do not use credit cards and I have no debt.) This person said that now the Irish judge people by a price tag and that everyone has one-in the mind of the secularist. He said that Ireland was now a police-state and that people had lost their independence. My observations have been supported.

I do not know, but anyone today who is completely au fait and never on line must be inspired. He quoted a book, one from the 1940s, which I shall look up.

Odd encounter of a second kind. No third. I forgot another one in Malta. For another day....