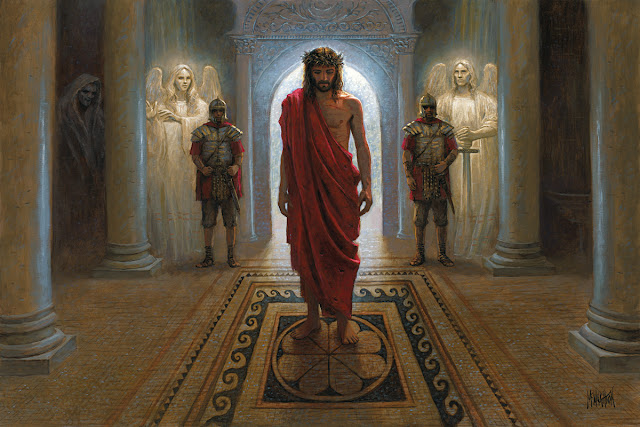 I had an insight into the real power of  the Passion and Death of Christ. God died. We have emphasized the Humanity of Christ so much in the last two centuries, that we Catholics have forgotten, as our abuses in the Mass reveal, such as noise in the Church, and the lack of reverence, that Christ always was, is and will be. He is the Second Person in the Holy Trinity. He was present at the origin of the material universe. He died.

God let Himself die at the hands of humans, so that we would be fully human and regain our divine life, lost in Eden.

Here is the new insight. God allowed Death to have a moment of victory, just a  moment, three days, so that we are not doomed to plan our own lives (sorry,Sartre). Christ died to free us from our own self-will. our own puny ideas of ourselves, of others, our own desire to play God.  Christ in the Garden of Gethsemane saw the entire world's humanity's efforts to be God-and to play God is to sin, to be presumptuous, to fall into pride or despair.

Christ became Man so that we could become Sons and Daughters of God. We, who were made in the Image and Likeness of God, again regained the ability, the chance to regain that image and likeness.

Such happens in the Sacrament of Baptism. If and how we cooperate with the graces of Baptism is our response to God.

My insight is not new or original. But, we must all come to the personal appropriation of Truth. Some come to this earlier than I have. Those live in trust, in hope, in faith, in love. These are the saints. I am just beginning life over again.

Posted by Supertradmum
There are 37 martyrs beatified from the time of the Cristeros. There is an encyclical on the persecution of the Catholic Church in Mexico (see below). The martyrs were from many types of people-lay, priest, seminarians. One was thirteen years old. Here is a partial list of the saints. I leave the links. The first, Cristóbal Magallanes Jara (1869–1927), may be the most well-known, as well as Blessed Miguel Pro, whose photo is on another post below.
Tomorrow in the States, the movie on the Cristeros movement or the Cristiada in Mexico open. Link is on name. I have seen some trailers. It may be too violent for the children, so parents, see it yourselves first, which is what my parents did and what I did. Go to the link and follow the timeline. Home schooling mom alert---this would make a good section of your American History curriculum. 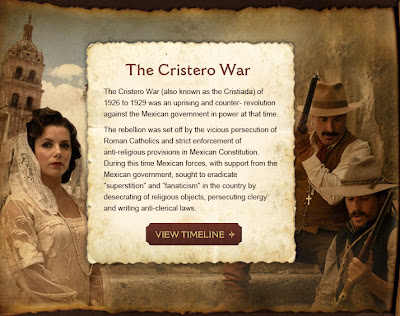 The movie has a timely opening date, as the theme is the war for religious freedom in Mexico. Here is a blurb from the website linked above. Comments welcomed for those who see this film. I would like some feedback

In addition, there is the encyclical of Pope Pius XI on the persecutions, on the Vatican website.