By The Grace of God

The phrase Dei Gratia,  is part of the title of the monarch of Great Britain. By the grace of God, she reigns. Now, Americans have a hard time with this overlap of religion and politics. And, this weekend's amazing celebration of the Diamond Jubilee of Queen Elizabeth I, brings out all the pomp and circumstance, religion and nationalism.

The existence of a monarch, who does not represent a political party, is a great symbol of unity for the people of Great Britain.

I find it interesting that the nation is responding so wonderfully to this celebration. For some, it is just a long, four day weekend. For others, it is a real day of celebration. 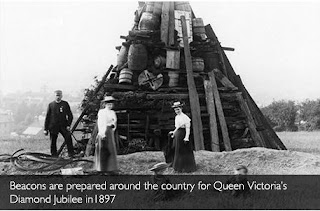 The countryside lies under miles of bunting. There are parties everywhere, and I hope, on Monday, to witness live the lighting of at least one of the beacons. If any of you saw The Lord of the Rings and the lighting of the beacons, that originated here in England as a warning for invasions. Thousands of beacons will be lit on Monday night as part of the Diamond Jubilee celebrations. Here is a link for that. There is an interactive beacon map, which is really cool. 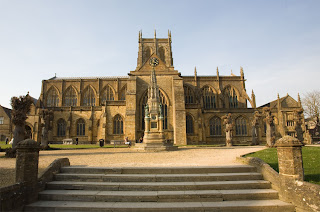 I attended the Jubilee Celebration concert at Sherborne Abbey on Saturday. I lived in Sherborne for three years and love this area so much. I know the Abbey well, as we lived in the precinct area, and I felt quite at home. The Sherborne Chamber Choir, Sherborne Abbey Choir and orchestra, with Conductor Paul Ellis, gave us a superb evening of music. The program included what one might expect at such a  concert:  Parry's "I was Glad" and "Blest Pair of Sirens", Vaughan William's "The Old Hundreth", Walton's "Coronation Te Deum" and "Crown Imperial", Handel's "Zadok the Priest", Orlando Gibbons "O Clap Your Hands", Rutter's "This Is the Day". Mealor's "Ubi Caritas" (this was the first time I have heard this in concert), Elgar's "Coronation Ode", and Britten's arrangment of the "National Anthem".

My house was right behind the Almshouse, which one can see in this picture. Trendle Street is a very, very short street. As to the above music, I am familiar with all of these, except for the Mealor, which was a great introduction to his work, as I did not watch the royal wedding last year, where this piece was introduced. I was glad to hear it for the first time in my old hunting grounds....

Only Anglophiles could handle such an evening of pure monarchism. But, we were all reminded by one of the readings, that it is only by the Grace of God that this present, and all monarchs reign. How appropriate this reading was in this ancient home of the Benedictines, Sherborne Abbey. By the way, some of you may not know that St. Stephen Harding, one of the founders of the Cistercian Order, came from Sherborne. 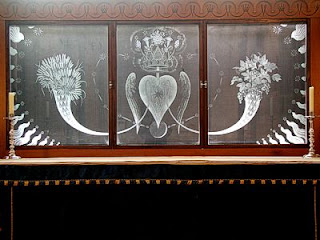 By the way,the other day I wrote about the engraved windows at Moreton. Laurence Whistler has one at Sherborne Abbey as well. I had forgotten this until I was in the Abbey Saturday night. More connections. I had seen it years ago and knew about both sites, but this window was forgotten by me. Life is full of small threads....

The Treasure Which Is Montacute and Blessed Margaret Pole 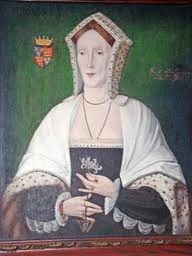 I have been visiting a friend I have known since 1991, which is a treat, as she is a very spiritual person and we can talk about God and the Holy Spirit working in our lives. 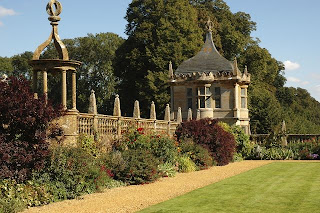 On Saturday, we went to Montacute, as we both have National Trust Memberships. This is, I think, the fourth time I have been there. Montacute is one of my favorite houses and set of gardens in England. I love this period of history. Out of all the treasures, the real beauty, for me, is the National Portrait Gallery's show of paintings. I love the Long Gallery, the longest in England, and have my "must sees" there. The must sees today included Blessed Margaret Pole, so my week began with her and ended with her. How is that for synchronicity? How blessed was I to start the week in Sussex where Blessed Margaret's Mass was celebrated in the Arundel and Brighton Diocese, and then to see her fantastic painting at Montacute? I did not even know her portrait was there until I visited this time. I wanted to see St. Thomas More's famous portrait, which I did , and I wanted to see Sir Walter Raleigh's and Bess Throckmorton's. I saw the two famous men, but Bess's portrait was not there. However, to see the Last Plantagenet was not an accident. I shall claim her, now, as a personal patron. 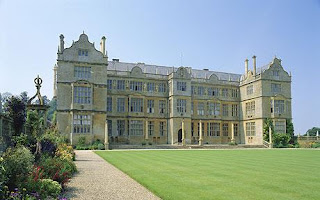 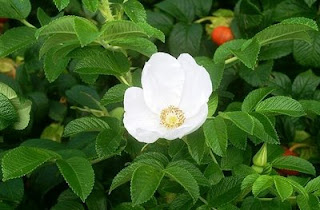 I have seen the gardens in several seasons, including winter. Today, the yellow irises were glorious and the famous hedge cut to strange Tudor and Jacobean shapes. Some houses are more peaceful and pleasing than others. Montacute leads my list of peaceful houses and restful gardens, and I highly recommend going soon, as the roses, except for the White Rugosas, have not yet bloomed. My only sligh t disappointment was that there were no sheep in the wilderness area, a first for me there. I wonder, are there no more sheep at Montacute? 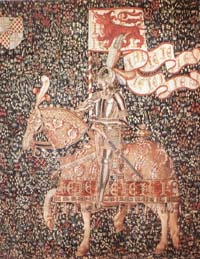 Another highlight was the millefleurs tapestry of the 15th century. I cannot help but re-print here an entire article on this outstanding example of the thousand flowers genre of tapestries. I think Blessed Margaret is happy knowing her portrait is in such good company, even though she was definitely not appreciated by the reigning Monarch when she was alive.

We are soldiers of Christ 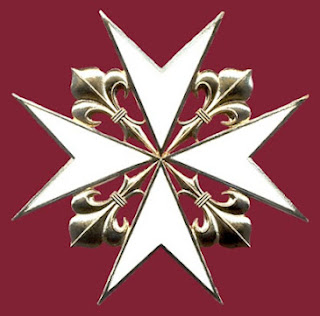 The need to destroy evil is the subject of this post. Evil cannot be ignored or tolerated. It must be defined and addressed. In these days of relativism and individualism, false tolerance and the acceptance of evil in our midst, it is difficult to explain to Catholics that they must stand against evil and not merely do nothing.

I had a long series earlier in May on the heresy of Quietism. The opposite is accepting the fact that through Baptism and especially Confirmation, we are all soldiers of Christ.

Sorry, there is no pacifism in the struggle against evil in the Church. Either we are doing something, albeit this could be quiet, yet sustained prayer and fasting, like the call of the contemplatives, or we lose the battles. And, what are these battles? We fight for the salvation of souls. Our soul and those of our families, our friends, our fellow parishioners, those with whom we come into contact make up the battlegrounds against evil and for good. The goal of humanity is eternal life with God.

I am challenging all who read this blog today to ask themselves, each one of you, "What am I doing to combat evil and bring about good in this world, with a view to eternity?" 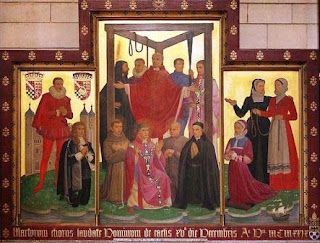 I am sure we shall be asked a similar question at our particular judgement.

We start with ourselves. We allow God to be God. We open ourselves up to God and His Grace, His Plan, His Love. Then, we step out in Faith, Hope, Love and all the virtues to bring light into the darkness.

Visiting England, the land of the martyrs, is inspiring. We are surrounded by the "cloud of witnesses". We know what to do and how to do it. We merely need to say "yes" to God and give Him our lives, daily.