Posted by Supertradmum
Could not resist a post on this. A drawing of a reindeer has been found in Wales and is the oldest rock art in Britain. Ah, as I am partial to Welsh artists, I am happy to report this find. Here is the link. The art is dated at about 12,500 BC. The article notes also that the oldest formal buried person is from Wales.


The limestone cliffs along the Gower coast are known for their archaeological importance.
The Red Lady of Paviland, actually the remains of a young man, is the earliest formal human burial to have been found in western Europe, around 29,000 years old.
It was discovered at Goat's Hole Cave at Paviland on Gower in 1823 by William Buckland, then a geology professor at Oxford University. 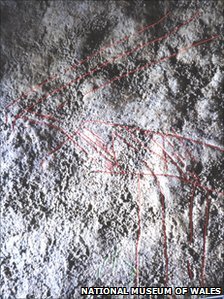 The picture is not too clear, but it is wonderful to know that men and women were "into art" for whatever reason so early.

Posted by Supertradmum
I am a bit late on this news, and the entire article is on Rorate Caeli. We need to pray for the SSPX and the Vatican persons involved in the reconciliation.


The district superior of Germany [of the Society of Saint Pius X (FSSPX / SSPX)], [Father Franz] Schmidberger, says to this newspaper that he knows that there are "people in the Vatican" that, against the will of the Pope, have thrown a wrench in the works.
Yet, Schmidberger described the nomination of the American Archbishop Joseph Augustine Di Noia last Tuesday as vice-president of the Ecclesia Dei commission as a "good sign". This commission operates under the Congregation for the Doctrine of the Faith and is responsible for the dialogue with the SSPX. Schmidberger assumes that Di Noia will advance the case according to the will of the Pope.
The Vatican spokesman Lombardi, however, told this newspaper that the Pope is indeed "in favour of reunion, but only under clear theological conditions". These conditions had not changed. The Dominican Di Noia was until recently secretary of the Congregation for the Sacraments. Thouvenot claims in his letter that circulates the internet that the pope approves of the version of the doctrinal preamble as presented by Bp. Fellay in April.
(...) While the Pope had approved of Fellay's version, Cardinal Levada would have proposed a version to Bp. Fellay mid-June that was "rolled back a couple of months". Accepting this version is "clearly unacceptable", according to Thouvenot [in the leaked internal correspondence]. Fellay would have reported this to Levada immediately.

Ven. Fulton J. Sheen on the Sacrament of Holy Orders

Posted by Supertradmum
I pray for many seminarians and those who are considering the priesthood. I also pray for priests. We must support our priests. There is a cool site on Venerable Fulton J. Sheen's comments on Holy Orders may be found here. A selection on celibacy follows:


Our Lord wished to have a group of men who would have the freedom to give full time to His service; hence He ordained in order that they who served the altar were to live by the altar. Celibacy in the Latin Rite stresses this quality of total dedication. The priest is a celibate in order that he might not have the cares of family and, therefore, not be afraid to minister to people in plague or to give the last rites to soldiers dying in battle. St. Paul, speaking of celibacy as a spur to undivided service, writes: "And I would have you free from concern. He who is unmarried is concerned with God's claim, asking how he is to please God" (I Corinth. 7:32). 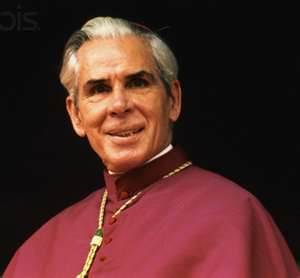 Chastity, however, is not something cold or negative. It is, as Francis Thompson called it, "a passionless passion, a wild tranquillity." A man cannot live without love, though he can live without romantic love or the Eros. The divine command, "increase and multiply" (Gen. 1:28) may be verified not only with reference to the body, but also to the soul. There can be increase of man in the cultural, moral, and religious spheres. The priest is called a "father," because he begets souls in Christ. As St. Paul wrote to the Galatians: "My little children, I am in travail over you afresh, until I can see Christ's image formed in you" (Gal. 4:19). The purer the mirror of his humanity is, the better he reflects the image of Christ.
Though a priest is called a father, nevertheless, he is also a "mother" of children. Our Blessed Lord used two analogies to describe His attitude toward the city that He loved, and also to all humanity. He said that He loved Jerusalem as a hen who gathers her chickens, but the city refused His love. The night of the Last Supper, He used the similitude of a mother about to bring forth a child, implying that He would be in labor in His Crucifixion, but would bring forth new life in His Resurrection.

Posted by Supertradmum
On a day and in a week when there are so many world crises, as in Egypt, the EU and in the States, I can hardly decide what to write. I think the most important thing today is to start the novena to the Holy Spirit which many of us are saying for the reconciliation of the SSPX. Here it is from the site. Click on the Veni Creator for the prayer.


"The Society of St. Pius X's annual General Chapter will take place at St. Pius X Seminary in Econe, Switzerland from July 9 to 14, following a retreat for the participants (the General Council and the SSPX's major superiors).