A snippet and more here...
http://www.catholicherald.co.uk/news/2013/10/10/catholic-doctor-may-be-struck-off-for-refusing-sex-selective-abortion/

A Catholic doctor who refused to sanction a sex-selective abortion is fighting for his career after a complaint was made against him.
Dr Mark Hobart could be struck off Australia’s medical register for declining to arrange an abortion of a healthy girl because her parents wanted a boy instead.
He was asked for an abortion by an Indian couple who wanted to a boy but the mother was 19 weeks pregnant with a girl.
But he would not accede to their demands because the pregnancy was at an “advanced stage” and because he saw no medical necessity for it.
He also refused to refer the woman and her husband to a second doctor who would arrange the procedure.
The couple found another doctor and went ahead with the abortion a few days later. 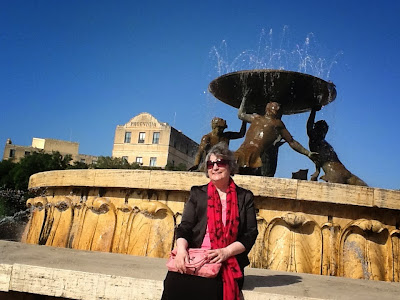 By the Triton Fountain in Valletta... I actually let my friend take a photo....some people want to move this fountain as it reminds them of the end of colonial Malta. Sigh....the politically correct seem to want to rewrite history.

Some people want a parking lot here. Can one imagine Romans moving fountains?

The Organisation for the Prohibition of Chemical Weapons won the Nobel Peace Prize today, and that led to one of the best tweets we’ve ever seen.

Nobelprize_org
✔ @Nobelprize_org
@OPCW Please contact us @Nobelprize_org we are trying get through to your office.
That’s right, the folks behind the Nobel Prize turned to Twitter — which started out as a place to tell the world what you ate for lunch and other such frivolities – to let OPCW know it needed to get in touch.
Let that reality sink in for a moment.

As I noted in the very beginning of the perfection series so long ago now, Garrigou-Lagrange believes, as do many mystics and theologians, that the higher levels of prayer and perfection are for all not for the priviledged few.

Now, as there are over 500 posts in that series, one must go back and systematically follow the outline of the road to perfection, including the many quotations of the saints which were given. The Doctors of the Church series also deals with perfection.

All people are called by God to be saints. All people are given grace to become holy. Sainthood is the condition of reaching the stage of Unity before death. There is no canonized saint who did not reach union with God before death.

The problems of approaching holiness on earth involve various aspects which I have delineated but which may be hard for some of you to find in the long series.

Here are the obstacles:

One, people are not generous, states St. John of the Cross, in responding to grace. Generosity of heart and mind mean that becoming one with God requires a decision and time, including making a relationship with God the priority in one's life.

Two, people do not believe that grace is given to all. It is, but not in the same manner. There is only one Blessed Virgin Mary, one St. John the Baptist, one St. Gemma Galgani, one St. Pio.

However, in this uniqueness, a person is called to be the saint God created him to be. Whether one is a child, a teen, a young adult, a middle-aged or old person does not matter as the stages are exactly the same.

Three, purgatory should not be seen as the norm, but the punishment for missed chances of grace and merit.
One should not aim for purgatory. This is not the goal, but heaven. And, canonized saints spent their time on earth being purified, skipping purgatory. If a Catholic does not understand that the process of holiness is the main reason for one's life, that is, the purification of sin and the tendencies of sin in order to truly love God instead of self.

Four, only the pure see God, which is connected to Three above, but only the pure can build up the Church as well. In other words, until one is purified, one merely works out of one's ego instead of out of love of God.  Too many problems in the Church have to do with people building their own little kingdoms instead of the Church which belongs to Christ.

The saints who set aside ego built institutions, such as religious orders, schools and so on within the Church which have lasted to this day: SS. Benedict, Bernard of Clairvaux, John Bosco, Dominic are a few examples.

The saints who set aside egos in order to write excellent treatises and masterpieces of doctrine and prayer, such as SS. Thomas Aquinas, Ignatius of Loyola, Alphonsus Ligouri and many more, built up the Church by entering into the Illuminative State and finally, the Unitive State.

Those who think they are building up the Church without purification first deceive themselves. And, this is one reason why the Church is so weak at this time, as the disciplines of prayer and penance have been set aside in favor of limited and impure action.

To know God's Will clearly and carry it out instead of imposing one's own will onto situations in the Church, one must pursue perfection through the stages of prayer.

Five, it is clear that most people do not enter into this journey because of their own free will. They allow themselves to be bound up by their predominant faults, which get in the way of holiness.

Much of this is a repetition of what I have emphasized before in the perfection series.

One more point and then I shall write more tomorrow. One cannot skip steps. God can give anyone grace and the stages may last a short period of time, as in the cases of young saints. Timing is God's agenda. Cooperating with grace is ours....

Answers and repeated answers on Quietism

Posted by Supertradmum
A reader asked me some questions on the levels of prayer. I can answer one of them quickly, as I wrote on the dangers of Quietism before...Check out these posts.

Etheldredasplace: The popular heresy of no pensar nada
12 May 2012
I have been concerned about a tendency in a certain generation, or generations of Catholics regarding the heresy of Quietism. Now, this heresy results in two effects, which basically separates those who seek the Kingdom of ...
http://supertradmum-etheldredasplace.blogspot.com/
Etheldredasplace: The Passive Ones
12 May 2012
Continuing my examination and application of Quietism in today's Church, I am continuing with the list of errors so clearly condemned by Holy Mother Church. Here are two more for consideration. 13. After our free will has ...
http://supertradmum-etheldredasplace.blogspot.com/

Mucking around Valletta and Sliema

Posted by Supertradmum
Those of you who have followed my blog know that I lived in Malta for several months in 2011. This is my second visit in 2013.  My favorite city is Valletta, where I am today, but with limited access to the Net. Last night, the Net went down in my flat in Sliema, which is why there are no posts today. Later on, I shall write on a few themes relating to the Church and Malta.

Pray for Malta. As many Catholic countries, it is going through a stage of rapidly losing its Catholic identity and becoming completely secular.

Why this has happened is owing to the idolization of money-same thing which has killed the simple, lovely Catholic faith of the Irish.

Money as a god is demanding, taking up time and energy from prayer and penance.

So many people act as though there is no afterlife or personal judgement.