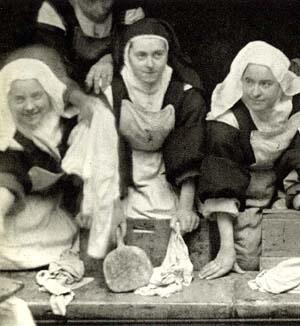 Priests forbidden to say Mass by US Government

“This is outrageous!!! Especially threatening them with arrest to voluntarily do their job.”
“Unbelievable! I was worried about this because our priest is contracted as well. It is bad enough to be furloughed but to not have a Mass to attend, is a real downer,”
“Just one example, a couple is getting married tomorrow at a large Air Force Base that is staffed by a Contract priest. That priest did all of their marriage prep, and has gotten to know the couple very well over the past few months. But with the shutdown, he cannot perform their wedding. Instead of the priest that the couple has come to know and love, an active duty priest has to be sent in to perform the wedding of two people who are strangers to him and he to them.”
” Is anyone up there going to start a protest?! A rosary ?!?!? A nice Catholic riot maybe?! PLEEEAAASSEEE?! SOMEONE?! ANYONE?! Any real Carholics out there?!!!!???!”

This is outrageous. It is a violation of the First Amendment. It is a prohibition of the free exercise of religion to order priests under penalty of arrest that they cannot volunteer their time to offer Mass to the faithful on base. This cannot be allowed to stand.
As of this writing, I have not yet received a response to my inquiry to the Archdiocese for Military Services as to what specific action steps we can take to get this problem addressed. Until we have a path to resolution, please share this story as widely as possible. Make people aware that Catholics serving our country are being forcibly denied access to the sacraments. These are the lengths the administration and the Democrats in Congress are willing to go to in order to continue inflicting as much pain as possible on the American people during the shutdown.

A snippet...shades of 2007 blogging before the first election....

The Obama-Reid strategy is, in a word, sadistic.

In the showdown over the shutdown of the U.S. government, the Obamaites tipped their hand yesterday as what their strategy is.
Taking a page out of Saul Alinsky’s “Rules for Radicals,” the plan is to maximize the people’s pain — to maximize the political damage to the enemy, the Republican Party.
What else explains it?....
Consider this: Asked Wednesday if there were any danger of America defaulting on her debt, President Obama rushed to assure a reporter that, yes, indeed, there certainly is such a peril.
Why would a president act in so perverse a manner, were he not trying deliberately to rattle or panic the markets?
Obama’s tactic worked. Thursday, the Dow plunged below 15,000.
and...
Undeniably, Republicans have voted to defund Obamacare, to suspend it for one year, and to reform it. But in each of these three votes, the House also voted to fund the entire government.
Why, then, is the government shut down? Because Harry Reid and Barack Obama have issued an edict: Either Obamacare is fully funded and untouched in the continuing resolution, or we kill the CR, shut down the government, and blame you.
And this is exactly what is going on.
Read more at the link.

From The Little Flowers of St. Francis

Posted by Supertradmum
For today, the Feast of St. Francis, I remind all my readers to pray for the Pope. This selection is from the famous book of The Little Flowers of St. Francis, (Fioretti), and provides a charming story of this great saint, Francis, who is the saint most like Christ Himself.

I chose this story out of many in the book for several reasons, one being that one of my favorite parishes in London is St. Mary of the Angels, a lovely church in Bayswater, and worth a visit.

St Francis, when residing at Assisi, often visited St Clare, to give her holy counsel. And she, having a great desire to eat once with him, often begged him to grant her this request; but the saint would never allow her this consolation. His companions, therefore, being aware of the refusal of St Francis, and knowing how great was the wish of Sister Clare to eat with him, went to seek him, and thus addressed him: “Father, it seems to us that this severity on thy part in not granting so small a thing to Sister Clare, a virgin so holy and so dear to God, who merely asks for once to eat with thee, is not according to holy charity, especially if we consider how it was at thy preaching that she abandoned the riches and pomps of this words. Of a truth, if she were to ask of thee even a greater grace than this, thou shouldst grant it to thy spiritual daughter.” St Francis answered: “It seems to you, then, that I ought to grant her this request?” His companions made answer: “Yea, father, it is meet that thou grant her this favour and this consolation.” St Francis answered: “As you think so, let it be so, then; but, in order that she may be the more consoled, I will that the meal do take place in front of St Mary of the Angels, because, having been for so long time shut up in San Damiano, it will do her good to see the church of St Mary, wherein she took the veil, and was made a spouse of Christ. There, then, we will eat together in the name of God.” When the appointed day arrived, St Clare left her convent with great joy, taking with her one of her sisters, and followed by the companions of St Francis. She arrived at St Mary of the Angels, and having devoutly saluted the Virgin Mary, before whose altar her hair had been cut off, and she had received the veil, they conducted her to the convent, and showed her all over it.

In the meantime St Francis prepared the meal on the bare ground, as was his custom. The hour of dinner being arrived, St Francis and St Clare, with one of the brethren of St Francis and the sister who had accompanied the saint, sat down together, all the other companions of St Francis seated humbly round them. When the first dish was served, St Francis began to speak of God so sweetly, so sublimely, and in a manner so wonderful, that the grace of God visited them abundantly, and all were rapt in Christ. Whilst they were thus rapt, with eyes and hearts raised to heaven, the people of Assisi and of Bettona, and all the country round about, saw St Mary of the Angels as it were on fire, with the convent and the woods adjoining. It seemed to them as if the church, the convent, and the woods were all enveloped in flames; and the inhabitants of Assisi hastened with great speed to put out the fire. On arriving at the convent, they found no fire; and entering within the gates they saw St Francis, St Clare, with all their companions, sitting round their humble meal, absorbed in contemplation; then knew they of a certainty, that what they had seen was a celestial fire, not a material one, which God miraculously had sent to bear witness to the divine flame of love which consumed the souls of those holy brethren and nuns; and they returned home with great consolation in their hearts, and much holy edification.

After a long lapse of time, St Francis, St Clare, and their companions came back to themselves; and, being fully restored by the spiritual food, cared not to eat that which had been prepared for them; so that, the holy meal being finished, St Clare, well accompanied, returned to San Damiano, where the sisters received her with great joy, as they had feared that St Francis might have sent her to rule some other convent, as he had already sent St Agnes, the sister of the saint, to be Abbess of the Convent of Monticelli, at Florence. For St Francis had often said to St Clare, “Be ready, in case I send thee to some other convent”; and she, like a daughter of holy obedience, had answered, “Father, I am always ready to go whithersoever thou shalt send me.” For which reason the sisters greatly rejoiced when she returned to them, and St Clare was from that time much consoled.