There are some scary people out there..... 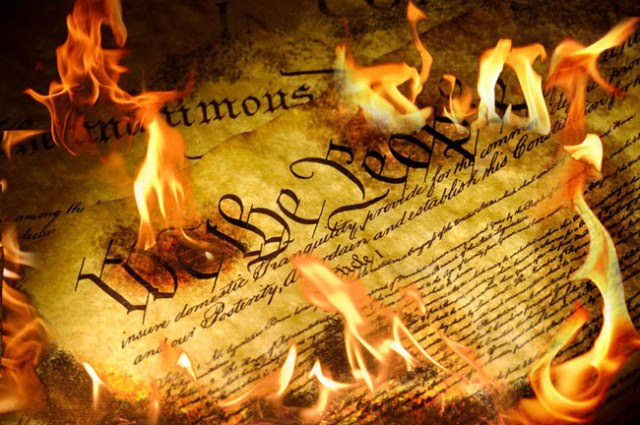 I've got a simple idea: Let's give up on the Constitution. I know, it sounds radical, but it's really not. Constitutional disobedience is as American as apple pie. For example, most of our greatest Presidents -- Jefferson, Lincoln, Wilson, and both Roosevelts -- had doubts about the Constitution, and many of them disobeyed it when it got in their way.

To be clear, I don't think we should give up on everything in the Constitution. The Constitution has many important and inspiring provisions, but we should obey these because they are important and inspiring, not because a bunch of people who are now long-dead favored them two centuries ago. Unfortunately, the Constitution also contains some provisions that are not so inspiring. For example, one allows a presidential candidate who is rejected by a majority of the American people to assume office. Suppose that Barack Obama really wasn't a natural-born citizen. So what? Constitutional obedience has a pernicious impact on our political culture. Take the recent debate about gun control. None of my friends can believe it, but I happen to be skeptical of most forms of gun control. I understand, though, that's not everyone's view, and I'm eager to talk with people who disagree.

But what happens when the issue gets Constitutional-ized? Then we turn the question over to lawyers, and lawyers do with it what lawyers do. So instead of talking about whether gun control makes sense in our country, we talk about what people thought of it two centuries ago. Worse yet, talking about gun control in terms of constitutional obligation needlessly raises the temperature of political discussion. Instead of a question on policy, about which reasonable people can disagree, it becomes a test of one's commitment to our foundational document and, so, to America itself.

This is our country. We live in it, and we have a right to the kind of country we want. We would not allow the French or the United Nations to rule us, and neither should we allow people who died over two centuries ago and knew nothing of our country as it exists today. If we are to take back our own country, we have to start making decisions for ourselves, and stop deferring to an ancient and outdated document.27 Jan 2013, 9:40 AM PDT