Wow, television is the enemy of contemplation

We only have so much time...watch the video here and the next one posted.

I have read all of Thomas Merton's books many, many years ago but I have missed some of his articles. Now, I have come across a startling one which I missed so long ago and I hope this helps.

you will read that the monk compared television watching as a caricature of contemplation.

This is earth-shaking. I knew that television interfered with silence and solitude, and that it is a brain-washing technique, but to read that it creates the same dynamic as contemplative prayer reveals the real evil.

Merton's points are these: one is passive and takes in uncritically what is given on the television; one is receptive to all that is there before one; one become inert and "yields" to  the "mystic attraction until one is spellbound in a state of complete union."

Merton goes on to write that television is the opposite of contemplation, which breaks with sensuality, noise, the senses in general, and the "will on a temporal or material level...the other...is the nadir of intellectual and emotional slavery." 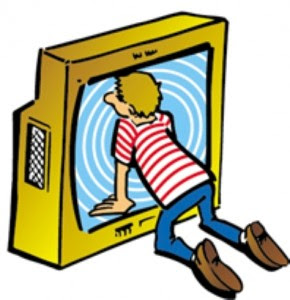 I visited the first house I have been in for a long time where television is on for hours and hours. People actually "shh" people into silence for stupid programs, like variety shows. I was not only amazed, but realized how this slavery is so real.

That family does not pray together and several members have fallen away from the Church. There is no adult reading concerning the Faith and no attempts at Lectio Divina. Up to six hours of television watching cloud the judgements and movements of those children as well who watch it.

Otherwise, you cannot even begin the road to perfection.

P.S. Let me add that the faculties of the soul and mind which should be used for contemplative prayer are being seized by television. This is the point of Merton's warning...................