Some things I just know by instinct and by intellectual training. As one who has studied Aristotle, Aquinas and Montessori, I am steep in the real, the necessity for experience as well as working on the intellectual.

In May of 1927, Dr. Montessori was interviewed about religion and the child. If I had a scanner, I would scan the entire interview. However, I shall highlight some main points.

The first is connected to Aristotle, Aquinas and how we all learn. I knew this point she made, which is coming after this long introduction, instinctively. This is it.

The Protestants spoiled religion, of course, in many ways, but one of the biggest ways was destroying Tradition including the Sacramental life of the Church. By only emphasizing the Bible, as people who only believed in private interpretation, they ruined the concept that religion is mostly learned by doing.


Montessori uses this truth by stating in the interview that millions of people who never learned how to read were good, even holy, Catholics.  This is because of the Liturgy, primarily, and the Sacraments, as well as sacramentals.

She makes the point that the child learns by making the sign of the Cross, putting his finger in holy water, kneeling down at Mass, following all the actions in the Mass.


She notes that what she is teaching in her method, things such as the silent game, which I played with my son, and proper deportment, carrying glass objects (real Montessori rooms have NO plastic) and so on.

The natural development of both small and large motor movements aid the child in doing the lay rubrics of the Mass and children should be made to do these.

Just yesterday, I was appalled at a grandmother letting a child old enough to sit, stand, kneel, run around the aisles and in the back of the Church. This is not necessary. Children KNOW appropriateness in certain places if they are encouraged to do so.  As Dr. Montessori notes, the child's daily activities in learning "are lifted to a higher plane to acquire a new and deeper meaning".

The problems are not in the child but in the parents who think children are not capable of sublime religious experiences.

Part of her interview reveals the basis of her method, that memorizing the Catechism, which she totally thinks is necessary, comes after the child has experienced the Mass, hymns, sacramentals and so on.

Dr. Montessori is very aware of modernism and states that the child should memorize the Catechism EXACTLY, as exact definitions are important.

The use of "didactic material" followed by formal Catechism memorization would create a powerful little Catholic.

If you have not visited the Catechesis of the Good Shepherd site do so.

I learned most of this on my own, obviously not realizing that the Holy Spirit was inspiring me. How exciting when I learned that the Good Shepherd materials were what I had made spontaneously.

Experience and words, according to the ability and age of the child...not just words...

There should be, as Montessori notes in the interview, no BREAK between daily life and religion. But, the religious teaching materials should be kept separate out of respect and the sense of the spiritual. Also, as she notes, the special shelves are like a little prayer corner, which I also had for my son-with small icons. If one has a large house, one should have one room devoted to prayer and the religious materials for teaching-a little chapel for the entire family. The house I had did not allow for this, but a section of the school room sufficed. Maria Montessori developed her idea of the Atrium from medieval  architecture. That is why in the Catechesis of the Good Shepherd, the name of the special room is called the Atrium. And, years and years ago, one of the most beautiful ones I saw next to an Episcopalian Church, purpose built for the children, had a large sunroof in the shape of a cathedral tower in the middle, leaving light in through the glass as in a church. It was almost perfect....


My son on the religion shelves, starting at age three, had boxes of the parables with little clothes peg characters we made together. The Lost Coin, the Lost Sheep, the Good Shepherd, the Prodigal Son complete with pigs, the Good Samaritan and so on were made out of pegs, pipe cleaners, glue and felt. The Bible was kept on the same shelf.

One day, when he was about four, and could read by that time, he was working on the timeline of the Old Testament. We decided to do the Exodus. For a week, we used about 99 clothes pegs to make an angry Pharaoh in gold lame with a crown, Moses, Miriam, Aaron, Caleb, Joshua and many, many Israelites and soldiers. Then we had to figure out how to do the Red Sea. Happy Days...Now the Exodus is a real event and the parables are stories, but my son was savvy enough to know the difference.

Now the key to these things, besides making them together, is that mom must read the real passages out of the Bible, not out of a paraphrased version, but the real deal.

The child listens to the passage, the parable and then acts it out with the clothes peg people, and what fun...

I spent years on my hands and knees on the floor teaching the Old and New Testament. Timelines are made with ribbons and circles with the main events of the two Testaments. I chose twenty of each Testament, made circles with my cookie cutter shapes tracing around those on white heavy paper, writing the event and NOT the date (I did draw symbols, however, connected to the events) and had my son learn to put them in order after I showed him. As soon as the child can read, one can do this, and then, read the appropriate passages with the 40 events.

Great fun....Here is another example of the Twelve Apostles and Jesus for the Last Supper part of pre-Communion training like the one above. 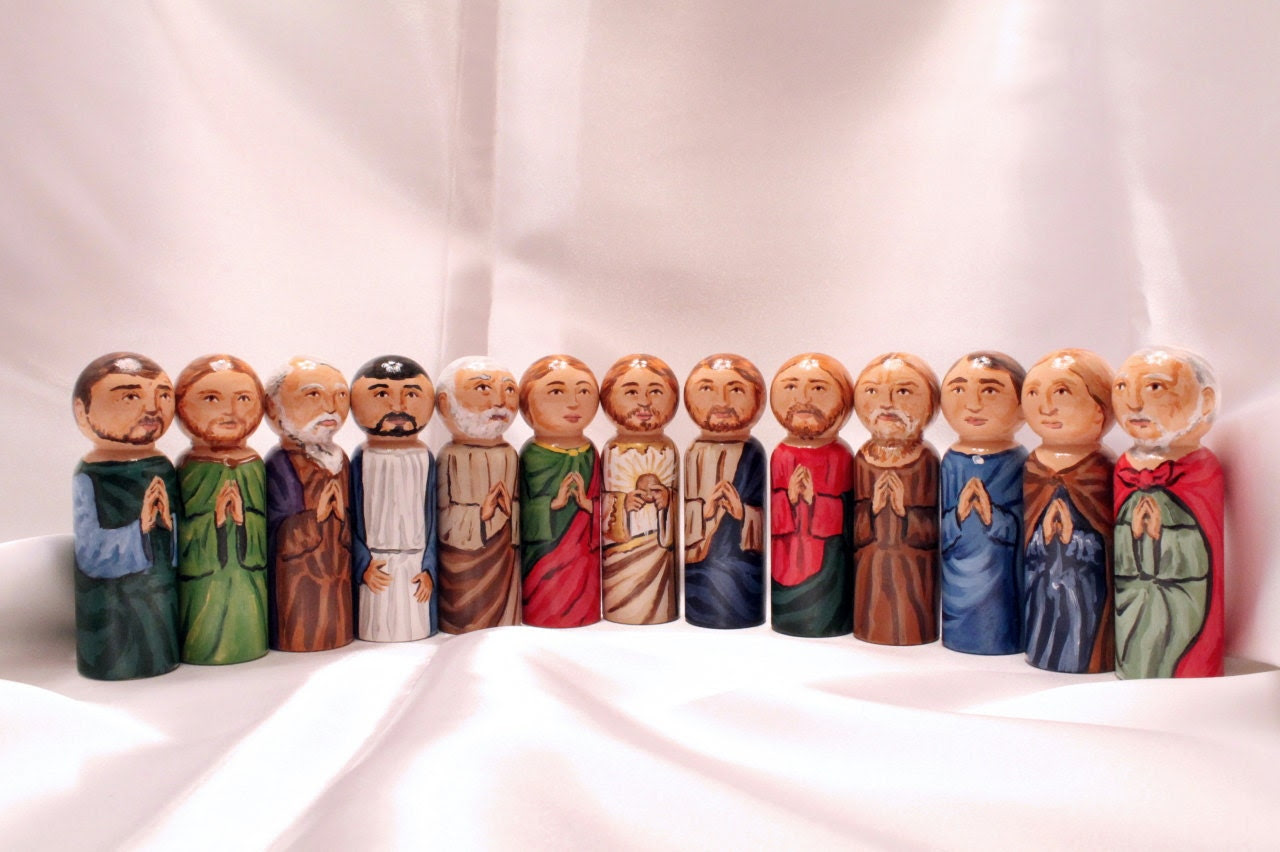 Here are some quotations from an Orthodox CGS site which partially summarizes this post:

In the Children's Room the child  is honored, nurtured,  and given a place for experiential activity,  reflection, and expression of their religious instincts.

The prepared environment is one that supports the child's natural inclination to be in relationship with God and the child's way of being.

The Children's Room supports the child’s natural rhythm of movement as the children are free to move in a purposeful way.

I highly recommend parents to read, Sofia Cavalletti, The Religious Potential of the Child