Some persons I know have had two experiences in the past year. One, is a particular judgement while still alive, wherein God has revealed to them all the sins of their life. One wonderful man I know, a single gentleman who works for Catholic charities in another country, said he sobbed for three days, and had his second conversion.

Another man I have spoken with has told me the same thing, where he had a physical and spiritual experience of being in hell, under torments, with God showing him his sins and the place he would be in if he did not repent. And he was was called to avoid future sins.

I have had two similar experiences, one in 2011 and one recently. Mine were of short duration, but intense. However, let us turn to St. Teresa of Avila's words for an explanation, and remember, she had not committed a mortal sin, but was shown the consequences of her evil tendencies if she did not allow God to purify her and the consequences of venial sins:

Some considerable time after our Lord had bestowed upon me the graces I have been describing, and others also of a higher nature, I was one day in prayer when I found myself in a moment, without knowing how, plunged apparently into hell. I understood that it was our Lord's will I should see the place which the devils kept in readiness for me, and which I had deserved by my sins (1). It was but a moment, but it seems to me impossible I should ever forget it, even if I were to live many years.The entrance seemed to be by a long narrow pass, like a furnace, very low, dark, and close. The ground seemed to be saturated with water, mere mud, exceedingly foul, sending forth pestilential odors, and covered with loathsome vermin. At the end was a hollow place in the wall, like a closet, and in that I saw myself confined. All this was even pleasant to behold in comparison with what I felt there. There is no exaggeration in what I am saying.

But as to what I then felt, I do not know where to begin, if I were to describe it; it is utterly inexplicable. I felt a fire in my soul. I cannot see how it is possible to describe it. My bodily sufferings were unendurable. I have undergone most painful sufferings in this life, and, as the physicians say, the greatest that can be borne, such as the contraction of my sinews when I was paralyzed, without speaking of others of different kinds, yea, even those of which I have also spoken, inflicted on me by Satan; yet all these were as nothing in comparison with what I felt then, especially when I saw that there would be no intermission, nor any end to them.

These sufferings were nothing in comparison with the anguish of my soul, a sense of oppression, of stifling, and of pain so keen, accompanied by so hopeless and cruel an infliction, that I know not how to speak of it. If I said that the soul is continually being torn from the body it would be nothing,--for that implies the destruction of life by the hands of another; but here it is the soul itself that is tearing itself in pieces. I cannot describe that inward fire or that despair, surpassing all torments and all pain. I did not see who it was that tormented me, but I felt myself on fire, and torn to pieces, as it seemed to me; and, I repeat it, this inward fire and despair are the greatest torments of all.

Left in that pestilential place, and utterly without the power to hope for comfort, I could neither sit nor lie down: there was no room. I was placed as it were in a hole in the wall; and those walls, terrible to look on of themselves, hemmed me in on every side. I could not breathe. There was no light, but all was thick darkness. I do not understand how it is; though there was no light, yet everything that can give pain by being seen was visible.

Our Lord at that time would not let me see more of hell. Afterwards I had another most fearful vision, in which I saw the punishment of certain sins. They were most horrible to look at; but, because I felt none of the pain, my terror was not so great. In the former vision our Lord made me really feel those torments, and that anguish of spirit, just as if I had been suffering them in the body there. I know not how it was, but I understood distinctly that it was a great mercy that our Lord would have me see with mine own eyes the very place from which His compassion saved me. I have listened to people speaking of these things, and I have at other times dwelt on the various torments of hell, though not often, because my soul made no progress by the way of fear; and I have read of the diverse tortures, and how the devils tear the flesh with red-hot pincers. But all is as nothing before this; it is a wholly different matter. In short, the one is a reality, the other a picture; and all burning here in this life is as nothing in comparison with the fire that is there.

I was so terrified by that vision,--and that terror is on me even now while I am writing,--that though it took place nearly six years ago, the natural warmth of my body is chilled by fear even now when I think of it. And so, amid all the pain and suffering which I may have had to bear, I remember no time in which I do not think that all we have to suffer in this world is as nothing. It seems to me that we complain without reason. I repeat it, this vision was one of the grandest mercies of our Lord. It has been to me of the greatest service, because it has destroyed my fear of trouble and of the contradiction of the world, and because it has made me strong enough to bear up against them, and to give thanks to our Lord, who has been my Deliverer, as it now seems to me, from such fearful and everlasting pains.

Ever since that time, as I was saying, everything seems endurable in comparison with one instant of suffering such as those I had then to bear in hell. I am filled with fear when I see that, after frequently reading books which describe in some manner the pains of hell, I was not afraid of them, nor made any account of them. Where was I? How could I possibly take any pleasure in those things which led me directly to so dreadful a place? Blessed for ever be Thou, O my God! and, oh, how manifest is it that Thou didst love me much more than I did love Thee! How often, O Lord, didst Thou save me from that fearful prison! and how I used to get back to it contrary to Thy will. 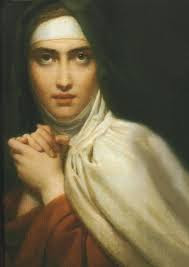 When I had seen this vision, and had learned other great and hidden things which our Lord, of His goodness, was pleased to show me,--namely, the joy of the blessed and the torment of the wicked,--I longed for the way and the means of doing penance for the great evil I had done, and of meriting in some degree, so that I might gain so great a good; and therefore I wished to avoid all society, and to withdraw myself utterly from the world. I was in spirit restless, yet my restlessness was not harassing, but rather pleasant. I saw clearly that it was the work of God, and that His Majesty had furnished my soul with fervor, so that I might be able to digest other and stronger food than I had been accustomed to eat. I tried to think what I could do for God, and thought that the first thing was to follow my vocation to a religious life, which His Majesty had given me, by keeping my rule in the greatest perfection possible.