The Elephant in the Church.... 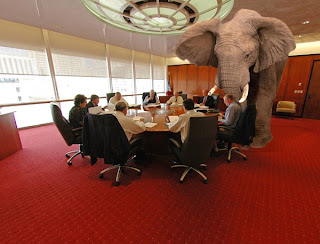 In Notebook 2 from 1929-1933, Gramsci, using R. Michels and Max Weber, writes a long entry on the fact that bourgeois, socialist and Marxist parties have been formed around a charismatic leader. Gramsci also refers to Yves Guyot's idea of the religious orders taking their names and charisms from such men-Benedictines, Franciscans, Dominicans, etc. Gramsci even refers to the anarchists and the anarcho-syndicalists, still alive and well today in Italy as seen in the troubles last Autumn, as groups, oddly organizing sometimes around a person of charism, despite the fact that these groupings are anti-authoritarian.

He goes on the write that the "basis of these parties is faith and the authority of a single individual. (No one has ever seen any such party; certain expressions of interests are, at certain times, represented by certain more or less exceptional personalities. During certain periods of  'permanent anarchy', due to the static equilibrium of the conflicting forces, a mans represents 'order'....there always is a program...which is general precisely because its only aim is to repair the exterior political facade of a society which is not undergoing a real constitutional crisis, but only a crisis arising out of the inordinate number of malcontents who cannot be easily controlled because of their sheer numbers and because of the simultaneous, but mechanically simultaneous, display of discontent across a whole nation...."

Gramsci also refers to "doctrinaire" parties, such as "free market or protectionist parties or parties which proclaim rights of freedom and justice..."

Basing his discussion on Michels, Gramsci notes that Mussolini at the time falls into this category of charismatic leader of a party. We now can add Hitler, Mao, and many others to this discussion.

For the purposes of a Catholic political discussion, we must note that Gramsci is both right and wrong on two accounts, as he finds that communism is the only answer to what he sees as faulty political analyses of Michels and the need for a system which acknowledges class struggles-the fixation of the Marxist.

Firstly, because Gramsci eschews religion as a reality for social change and for social unity, he wants political organizations to take the place of a religious philosophy underlying all; for example, we as Catholics would start with a Natural Law philosophical position and move to an ethical or moral position of government based on Christian principles and the Christian definitions of State and individual (Maritain has an excellent book on this subject-The Person and the Common Good-which I read many years ago, but is still valid for discussion.


That the Marxist only has a material and in Gramsci's case, a historical view of humankind, and the individual, the spiritual goals of men and women are only considered in terms of a vague morality. Here is Gramsci in Notebook 4- "Clearly, neither materialist nor idealist monism, neither matter nor spirit, but historical materialism, i.e. activity of people (history) .. i.e. applied to a determinate organised material (material force of production), to nature reshaped by people. Philosophy of act (praxis), but not of the pure act, on the contrary, of the impure, i.e. the real, act in the profane sense of the word.." .And, again.."In this way we also arrive at a fusion, a making into one, of 'philosophy and politics,' of thinking and acting, in other words we arrive at a philosophy of praxis." And in Notebook 8, "Where, in a philosophy of praxis, everything is praxis, the difference will not be between moments of absolute spirit, but between structure and superstructures; it will be a matter of establishing the dialectical position of political activity as differentiation in the superstructures." (some quotation marks are changed or missing from my transcription).


Man becomes the only meaning to his own destiny and the only goal of history, which he created. Unlike the Catholic, who sees the Incarnation of the God-Man, the Second Person of the Blessed Trinity, as the culminating event of human history, combined with the Resurrection from the Dead, as the changing event of all history, Gramsci cannot believe in the spiritual reasons for history-that is-the renewal of the world and the establishment of the Kingdom of God on earth. Man is the creator of his own destiny. And politics becomes the only force for change-that is, political action tied to the Marxist ideology. Some critics disagree with the Marxist ideological underlay to Gramsci's ideas of praxis and history, but these are intertwined and used interchangeably. I am not going to get into the discussions about whether Gramsci's ideas vary from traditional Marxism here. But, I want those in the Church to understand where the financial and social thinkers of Europe have imbibed these ideas and are creating or destroying, the new Europe accordingly.


Now, there is one "party" which has for all time a charismatic leader, who is not a political king but King of the Universe and that is Christ. Sadly, as the Marxist can only think and work in materialist terms, the spiritual nature of the Kingdom, that is, the changing of men's hearts to those of love and consideration for their neighbor, is not a reality.


Secondly, the problem with his analysis of other philosophers of politics or history is that he uses the same framework of class struggle, not believing at all in noblese oblige, or the requirement of the rich to help the poor while recognizing differences. I find it interesting that Gramsci is so optimistic, so hopeful as to political change based on an intellectual change, rather than a change in the spirit. He used the word spirit, but by that does not mean an eternal life in each individual but some sort of movement of man, not unlike those of the progressivists, whom he criticizes. This second error, of ignoring the eternal spirit, means that political struggle and cultural change is all important, is the only way for humans to live in peace. His ideas are utopianism in another disguise, and as such, fall into the heresy of wanting a perfect system on earth, which is not possible.


Once someone denies the spiritual and only works in the material, this utopianism is the only goal of all activity. Of course, I am looking only at the Notebooks and some of the Letters, hardly a complete philosophical system is created therein. But, the effect of such notes and references has been a cultural revolution in Europe and now in America, which needs addressing.


Modern secular humanism substitutes the same ethical framework. The Post-Moderns would find a home in Gramsci, perhaps even the late Christopher Hitchens, who had an ethical outlook without the framework of religious dogma. This type of atheism is popular in Europe and increasingly so in the States. But, what I find most disturbing, and what I am trying to address, are the Catholics who are "practical atheists" in that they believe the same premises as the secular humanists and Gramsci, but call themselves Catholics.


Now, the reason this discussion is so important for me is that too many discussions concerning socialism or communism center only on the economic structures and not the philosophical structures of atheism and secular humanism. Those in the Church need to engage a conversation at this level-of showing that the individual and his rights are at stake not merely because of economic structures, but because of the denial of the Incarnation as a force in history and in the world. This is not to fall into Liberation Theology, which sees Jesus only as a material Messiah, but to stress the recreating nature of Catholicism as a force in politics and cultural renewal from the spreading of the Gospel message. Unless the larger view is established in the minds of priests, bishops and cardinals, as well as the laity, the Church will lose many souls and nations to a more organized social restructuring. The Church can do the restructuring, but only with open eyes and a clear message of evangelization. This cannot be merely a softly, softly approach, but one of passion and conviction, which so many Catholics eschew. 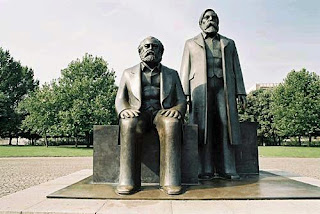 Many years ago, the post office lost my copy of Enthusiasm by Ronald Knox, which would come in handy here as another critique of fanaticism, both spiritual and material, which we are dealing with in the socialists and communists of Europe. If someone wants to buy me another copy, I would appreciate it. The socialist and communist agendas must be examined in the light of Catholic heresies, held by a large majority of Catholics in Europe. Catholic Churchmen in America must stop playing footsy with any type of socialism and communism, which happens too often, even in seminaries.