The Harrowing of Hell--The Ignored Event in the Creed

Posted by Supertradmum
One of my favorite meditations is the Harrowing of Hell. This is in the Creed, "and He descended into Hell" or in some translations, "He descended unto the Dead". The idea of Christ freeing all the just, who were waiting for Him for years makes for an exciting scenario. Can you imagine the joy of the just and the perplexing anguish of Satan? 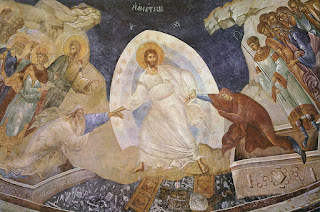 Years ago, I heard a sermon by a Protestant minister on television, yes, I did. This man was describing the Harrowing of Hell and the power of Christ's Redemption. Since then, I have only heard one sermon in a Catholic Church on this Creedal belief. Why?

What a powerful belief, in which the Second Person of the Blessed Trinity Incarnated saves Adam, Eve, all the just of the Old Testament, John the Baptist, and even His Foster-Father, Joseph, because the Gates of Heaven were closed until the Redemptive Suffering and Death on the Cross, has been revealed to us.

The Byzantine Catholics and the Orthodox have a long history of icons of this great event. I suggest the Western Church concentrates more on this teaching.