Posted by Supertradmum
Today and tomorrow, I am highlighting the Carthusians in England. Nothing happens by accident.

Yesterday, I had a delightful tour of the London Charterhouse given by The Reverend Canon Hugh Williams, Preacher of Charterhouse. Mother General of the Tyrburn Nuns had suggested I visit and a seminarian friend and I had a fantastic private tour. 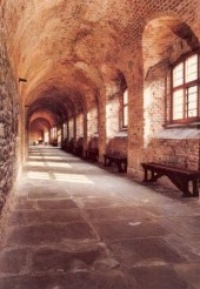 The Charterhouse was established in 1371 and brutally ruined by Henry VIII in 1538. Henry was particularly angry with St. John Houghton and especially St. Sebastian Newdigate, a court favourite who became a monk of the Carthusians. Henry thought he would woe the order into accepting him as Head of the Church. Remember, the first martyrs under Henry were Dom John Houghton, Prior, Dome Robert Lawrence, Prior of Beauvale, Dom Augustine Webster, Prior of Axholme, Rather Richard Reynolds, a Brigittine Monk of Syon and Father John Hale, Rector of Isleworth.

They were hung, drawn and quartered on May 4th, 1535 at Tyburn. Now, also remember, that St. Thomas More saw them being dragged from prison on the hurdles, and he describe them as "bridegrooms" going off to meet their brides. 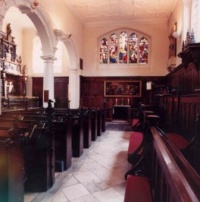 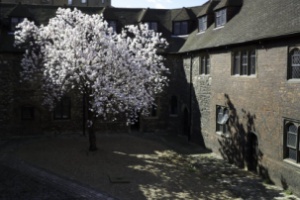 The priory was brutally ruined, and WWII bombing almost finished the building off completely.

However, as Canon Williams told us, a strange lay person, who was the richest man in England not in the aristocracy, Mr. Thomas Sutton, eventually bought the property, which, for a short time, was owned by the Howards.

Mr. Sutton was an interesting man, as he garnered wealth in some interesting ways. Enough said.

I cannot go into all the rich history, but one must visit the Charterhouse. 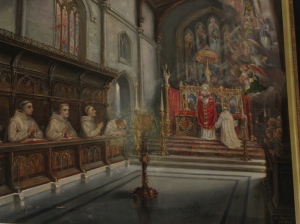 For me, the most numinous place was the ruins of the Priory Church tucked in behind the newer buildings. To see the original site of  the altar and the tomb of the founder, Sir Walter de Mauny was so awesome, in the real sense of the word. One could sense the holiness of the place.

Please go and have a tour. Public tours are on Wednesday afternoons. Also, if you can, help the poor who live there. The Charterhouse takes care of up to 46 laymen who need care.