The wind and the rain in Eire

I am a rational creature. I am not superstitious or sentimental. I do not believe in most popular private revelations which are not approved by the Church. However, being in Ireland has brought something to my attention.

There is something odd about the weather. I noticed it when I flew into Ireland a year ago almost exactly a year ago to the date I shall be leaving.

Now, I grew up in tornado alley, going into the basement because of tornadoes at least seven times in my life in that area. I lived in a town where people died of tornadoes.

I never felt about the winds and gales in America or England as I do here.

Twice, I wanted to go to a rugby game here in Dublin, but the weather was horrid.

In Cobh, the wind and rain comes in almost daily. The fog is so thick there are fog horns and ships frequently have to line up and wait to go out into the Atlantic, waiting for the fog to lift.

I realize that the Green Isle is green because of the rain. But, the daily onslaught of wind and gales in certain areas is said to add to the suicide rate here. There is a connection between mental health and weather, or climate. 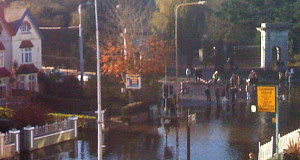 But, this is almost as if the constant onslaught of wind and rain is determined to create an atmosphere of sadness and dread.

Also, the weather keeps people inside and interferes with the growth of community. There is a reason why the southern countries seem to have more community than those in the north.

And, this is extreme.

No winter sports here, as in Minnesota or Wisconsin or Alaska or Alberta. No snow, no ice, just wind and rain.