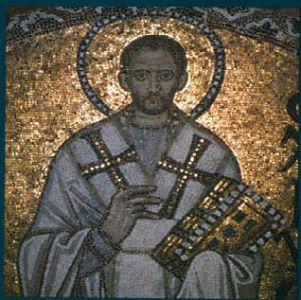 I usually do not think it necessary to relate any of the biographical details of the Doctors of the Church in this series, but here are some fascinating details from here. Another interesting detail in Cyril's life was that he was made a deacon at the age of twenty.  I am sorry that I did not get to him for the celebration of his feast day on March 18th, but world events and the grace series took up my time....to be continued.

That Cyril, whether a native of Jerusalem or not, had passed a portion of his childhood there, is rendered probable by his allusions to the condition of the Holy Places before they were cleared and adorned by Constantine and Helena.  He seems to speak as an eye-witness of their former state, when he says that a few years before the place of the Nativity at Bethlehem had been wooded2, that the place where Christ was crucified and buried was a garden, of which traces were still remaining3, that the wood of the Cross had been distributed to all nations4, and that before the decoration of the Holy Sepulchre by Constantine, there was a cleft or cave before the door of the Sepulchre, hewn out of the
rock itself, but now no longer to be seen, because the outer cave had been cut away for the sake of the recent adornments5.
This work was undertaken by Constantine after the year 326 a.d.6; and if Cyril spoke from remembrance of what he had himself seen, he could hardly have been less than ten or twelve years old, and so must have been born not later, perhaps a few years earlier, than 315 a.d.