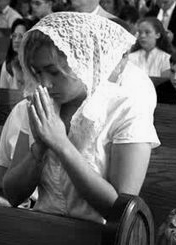 There are some nuns and priests who are confusing people by using the terminology of prayer incorrectly. I have heard many times a nun who is teaching prayer tell people that they are contemplating, when this level of prayer is only achieved after the Dark Night of the Soul. What she means is meditation, which is not the same as contemplation. Sadly, some of the more liberal nuns and those who are not well taught themselves, cause confusion among the laity with regard to the levels of prayer. I shall review these now.

The prayer of meditation precedes the Dark Night. One must move into that stage of prayer before experiencing the Dark Night. Why? Because unless one is somewhat proficient in meditation, one cannot reflect to the point of understanding the purifications, which are between the person and God. Unless one has had spiritual director for years, one who can tell one the predominant fault, one needs to do this on one's own.

A sign of the movement towards the Dark Night is the movement into regular meditation, as meditation disappears in the Dark Night as indicated on the list of the levels of prayer. The first, the Ascetical, is the Purgative Way.  This stage includes: one, vocal prayer; two. meditation; three. affective prayer; four, acquired recollection. These all precede the Dark Night of the Soul.

The last two may not be familiar to some readers. Affective prayer is in the will. It is the movement of the mind from meditation, which is intelletual rational discourse and the use of the imagination to prayer based on love of God. However, one must not, and I repeat strongly, must not, seek consolations in this type of prayer. One is willing to love God. If there is a feeling of love, fine, but that is not the goal. The goal is to love God for Himself. 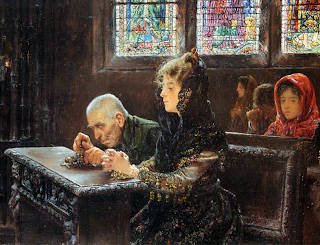 Acquired recollection follows, and this is the attempt of the person to recollect in memory, understanding and will on the attributes of God. This is not without danger, as a person can fall into self-adoration too easily. Acquired recollection is exactly as the name states-it is not infused contemplation.

It is active, not passive recollection.

Garrigou-Lagrange states this quotation from St. Teresa of Avila:

It is called (active) "recollection," because by its means the soul collects together all the faculties and enters within itself (25) to be with God. The divine Master thus comes more speedily than He otherwise would to teach it and to grant the prayer of quiet. For, being retired within itself, the spirit can meditate on the Passion and can there picture in its thoughts the Son, and can offer Him to the Father without tiring the mind by journeying to find Him on Mount Calvary, or in the garden, or at the column.


Those who are able thus to enclose themselves within the little heaven of their soul where dwells the Creator of both heaven and earth, and who can accustom themselves not to look at anything nor to remain in any place which would preoccupy their exterior senses, may feel sure that they are traveling by an excellent way, and that they will certainly attain to drink of the water from the fountain, for they will journey far in a short time. They resemble a man who goes by sea, and who, if the weather is favorable, gets in a few days to the end of a voyage which would have taken far longer by land. These souls may be said to have already put out to sea, and though they have not quite lost sight of land, still they do their best to get away from it by recollecting their faculties. If this recollection is genuine it is easily discerned, for it produces a certain effect that I cannot describe, but which will be recognized by those who know it from personal experience. The soul seems to rise from play - for it sees that earthly things are but toys - and therefore mounts to higher things. Like one who retires into a strong fortress to be out of danger, it withdraws the senses from outward things, so thoroughly despising them that involuntarily the eyes close so as to veil from the sight what is visible, in order that the eyes of the soul may see more clearly. Those who practice this prayer almost always keep their eyes shut during it.

This is an excellent custom for many reasons. . . . The soul appears to gather strength and to dominate itself at the expense of the body. . . .By persevering in the habit [of recollecting itself] for several days, and by controlling ourselves, the benefits that result will become clear. We shall find that when we begin to pray the bees (symbol of the different faculties) will return to the hive and enter it to make the honey without any effort on our part, for our Lord is pleased to reward the soul and the will by this empire over the powers in return for the time spent in restraining them. Thus the mind only requires to make them a sign that it wishes to be recollected, and the senses will immediately obey us and retire within themselves. . . . When the will recalls them they return more quickly, until after they have re-entered a number of times, our Lord is pleased that they should settle entirely in perfect contemplation.(28)

It is only after the Dark Night of the Soul that Contemplation occurs. Do not let any liberal nuns or priests confuse you on this point.

In the next post, I shall continue with Mystical Prayer, which follows the Dark Night.

Just to remind people, the rosary can be meditation, but this type of prayer usually employs the active imagination with Scripture, as taught by St. Ignatius so clearly.

Also, the Liturgy of the Hours, is verbal prayer, as is singing.