I do not usually watch television, but staying with a friend who does has been interesting. What astounds me, as I chose where I get my news and it is never the main stream media, are the number of shows dealing with money.

How many commentators are necessary to keep up the daily lies concerning the real state of the economies of Europe and America? Are people really duped by the myriad conversations, panels, debates?

The obvious gods of the vast majority of people are the accumulation of wealth and the consuming of goods. One of the most startling things about living in a land which relies on holiday makers for the vast majority of its income is the conspicuous waste of wealth. I want to crawl into a hole and stay there with bread and water at this point of my visit. Where are the hermits doing penance for all this waste?

A recent Gospel in daily Mass was this:

Douay-Rheims
13 And one of the multitude said to him: Master, speak to my brother that he divide the inheritance with me.
14 But he said to him: Man, who hath appointed me judge, or divider, over you?
15 And he said to them: Take heed and beware of all covetousness; for a man's life doth not consist in the abundance of things which he possesseth.
16 And he spoke a similitude to them, saying: The land of a certain rich man brought forth plenty of fruits.
17 And he thought within himself, saying: What shall I do, because I have no room where to bestow my fruits?
18 And he said: This will I do: I will pull down my barns, and will build greater; and into them will I gather all things that are grown to me, and my goods.
19 And I will say to my soul: Soul, thou hast much goods laid up for many years take thy rest; eat, drink, make good cheer.
20 But God said to him: Thou fool, this night do they require thy soul of thee: and whose shall those things be which thou hast provided?
21 So is he that layeth up treasure for himself, and is not rich towards God. 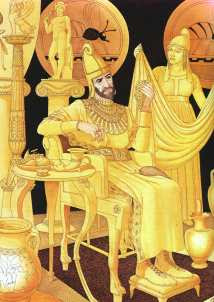 Take the Real God seriously when He speaks like this....do not be a fool.  Our God will not be mocked by false gods.