The City of God, Again 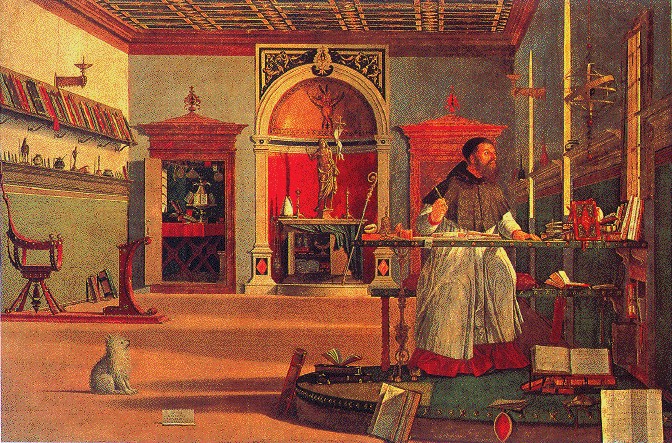 Re-reading the City of God after many years, (I taught this last in college in 2004), I am struck by the clarity of St. Augustine and the care which he took in writing this masterpiece.

He wrote to St. Jerome for translations of Greek commentaries on the Scriptures. He used his classical education in philosophy and religion, as well as rhetoric, applying these disciplines to his genius. He obviously prayed while writing, as it took him so long to finish the book.

Some commentators, and I disagree with them, claim St. Augustine never threw off the false philosophy of dualism. No one with Augustine's acumen would have kept this fallacy of perspective after discovering the truth of Christ, the richness of the Old Testament and New Testament revelations, and his, Augustine's own infused knowledge coming from grace.

What some worldly, and to be honest, Anglican, commentators have done is deny that there are two cities, own created by God and one by men. That these two cities grow side-by-side until the Second Coming of Christ seems more and more difficult to understand for many, who only perceive the City of Man. One cannot understand the City of God as an image, a symbol for the Kingdom of God without studying some Scripture and some philosophy. But, for adults to tackle this book seems more important to me now than ever, as we stand on the brink of the complete destruction of Western Civilization as we have known it.

Some of my friends have said to me that they no longer love America, or England, or France. I remind them that patriotism is a minor virtue, but that one can love the "real" nation and not the one which has fallen into decay and corruption.

That Augustine loved Rome as Rome is clear, but he did not love the degradation and the false history of the founding of Rome. He knew that Rome was limited, just as men and women are limited in material ways.

According to Augustine, the City of Man exists for the fallen angels as well, a place of suffering for those pure spirits who disobeyed God and were condemned instantly for that rebellion.

Another quick point, and I shall return to this again, is Augustine's assurance that the fall of Rome was just punishment for great evils. In fact, he implies that the punishment could have been worse.