Posted by Supertradmum
I only have time to write this and one other post on the retreat, which is now over. Father Xavier's presentation on authority was one of the most important parts of the retreat. Again, he reiterated Church teaching and many things I have put on this blog in the past. But, his great intuitions cannot be surpassed.

Starting with Adam and Eve, Father Xavier pointed out some key points which I shall place as bullets.

If a man uses authority for his own ends, like selfishness, he is sinning against God. Women sin by not being obedient.

Adam did not take care of Eve by refusing the apple. This is the sin of men.

Children are protected if they are obedient to their parents, but not protected from evil is they are disobedient.

Father noted that women are not submissive or have to be obedient to men in heaven, Men and women have the same status in heaven, so that if married women can learn to be obedience, they will get to heaven and be happy as equals.

Now, one of the gravest examples of the usurpation of authority today is this false idea of the laying of hands on people by charismatics. I was so happy to hear Father talk about this, as I have written on this blog many, many times about one, not doing this, and, two, not letting anyone do this to you.

Do not fall into this false laying of hands, Father said clearly. In fact, one is opening up one's self to demonic influences through those people who are usurping authority.

Sigh, I felt vindicated, but God has taught me many things through the years and I was so glad that a good priest was stating strongly what I had learned the hard way.

Obedience is the root of holiness as it is connected to holiness.

No lay person can bless anyone else or claim authority in this way, especially claiming the laying of hands, which is ONLY a priestly function, done by priests or bishops. Only the priest's hands are consecrated.

Parents may pray over their children and even anoint them with sacred oil, but no one else, outside the clerical hierarchy.

Demonic influence will enter a person's life through the false laying of hands. As Father said, they mean well, but they are wrong, and "out of order."

Thank you, Father, for backing me up on this point. Humility is the key to serving God as He has ordained us to serve Him. Usurpation of power is a serious sin. 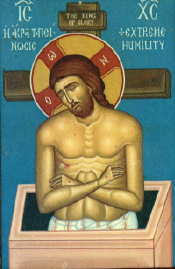