Posted by Supertradmum
Recently, it has occurred to me, that the gross narcissism of the cultures of the West, has infiltrated the way Catholics think. Of course, for years, I have had the tag "thinking like Catholics" in order to bring people to a reality that one thinks certain things before one acts.

Many parishes and dioceses have initiated excellent sounding programs on "adult formation" and "evangelization" involving programs and courses on how to go out and bring people into the Catholic Faith.

Except for a few exceptions. all these programs concentrate on ACTION instead of on prayer and the levels of prayer.

No one, as I have noted many times on this blog, can be effective in the spiritual life of others unless one is willing to go through the tedious, hard, and sufferings times of purgation. No one.

There is only one Blessed Virgin Mary and one St. John the Baptist, who came into this world without sin, one from conception and one from a particular grace in the womb.

The rest of us, including Dear St. Joseph, had and have to work out our righteousness by cooperating with grace.

More and more Catholics think they can evangelize without dealing with their predominant fault(s) and even venial sins.

The saint has dealt the death-blow to sin and can merit graces which are then efficacious in the lives of others.

If I pray for someone, and nothing happens, I do not say, "Oh, it is God's Will that so and so is not healed" or freed, or converted.

I go back to Our Lord and BEG Him to show me the blockages of my own sins which stop the efficacy of prayer.

Lord, show me my sins, my failings, my predominant fault for the sake of the Church...and so on.

The entire perfection series was written now several years ago not merely for the selfish to think that only they should get to heaven, but for the Church.

We cannot pretend to be saints. One either is or isn't. One is either in sanctifying grace and allowing God to purged one of all sin and even concupiscence, or one remains ineffective.

Recently, God called me to more penance. Now, those who know me or have followed this blog know how I live, but I have been called to more penance for the sake of souls. Daily, people die who have had no one to pray for them.

The majority of people go to hell. Sorry this is not my idea, but those of the saints, including the great Augustine.

God has given me two diets through my excellent, Catholic and holy doctor--of a rare breed.

Red meat once a week, no fatty meat, (I was invited out for pork ribs this evening and had to say no), no Ramen noodles, or mac and cheese or other poor food. I had already given up deserts over a year ago, so that is not an issue. Now, I have to somehow give up poor food.

Now, I can add some physical power to prayer.

Yet, some of my prayers are not answered. I ask God why....and here is the answer.

27 And when he was come into the house, his disciples secretly asked him: Why could not we cast him out?

28 And he said to them: This kind can go out by nothing, but by prayer and fasting.

29 And departing from thence, they passed through Galilee, and he would not that any man should know it.

Souls are at stake. I love many people. I never stop loving someone whom I have loved. I love my ex, my old boyfriends, my family members who I do not see because of circumstances. I love new friends and old friends. I love students I have taught-special ones, and many priests who have brought me closer to God.

Love is the impetus for intercessory prayer, but fasting and purgation must accompany such prayer.

Have you been praying for someone for a long time?

Maybe God is asking you to do more, to be more severe with yourself in order to join in the merit of Christ on the Cross.

2 For yourselves know, brethren, our entrance in unto you, that it was not in vain:

2 But having suffered many things before, and been shamefully treated (as you know) at Philippi, we had confidence in our God, to speak unto you the gospel of God in much carefulness.

3 For our exhortation was not of error, nor of uncleanness, nor in deceit:

4 But as we were approved by God that the gospel should be committed to us: even so we speak, not as pleasing men, but God, who proveth our hearts.

5 For neither have we used, at any time, the speech of flattery, as you know; nor taken an occasion of covetousness, God is witness:

6 Nor sought we glory of men, neither of you, nor of others.

7 Whereas we might have been burdensome to you, as the apostles of Christ: but we became little ones in the midst of you, as if a nurse should cherish her children:

8 So desirous of you, we would gladly impart unto you not only the gospel of God, but also our own souls: because you were become most dear unto us.

9 For you remember, brethren, our labour and toil: working night and day, lest we should be chargeable to any of you, we preached among you the gospel of God.

10 You are witnesses, and God also, how holily, and justly, and without blame, we have been to you that have believed:

11 As you know in what manner, entreating and comforting you, (as a father doth his children,)

12 We testified to every one of you, that you would walk worthy of God, who hath called you unto his kingdom and glory.

13 Therefore, we also give thanks to God without ceasing: because, that when you had received of us the word of the hearing of God, you received it not as the word of men, but (as it is indeed) the word of God, who worketh in you that have believed.

14 For you, brethren, are become followers of the churches of God which are in Judea, in Christ Jesus: for you also have suffered the same things from your own coutrymen, even as they have from the Jews,

15 Who both killed the Lord Jesus, and the prophets, and have persecuted us, and please not God, and are adversaries to all men;

16 Prohibiting us to speak to the Gentiles, that they may be saved, to fill up their sins always: for the wrath of God is come upon them to the end.

17 But we, brethren, being taken away from you for a short time, in sight, not in heart, have hastened the more abundantly to see your face with great desire.

18 For we would have come unto you, I Paul indeed, once and again: but Satan hath hindered us.

19 For what is our hope, or joy, or crown of glory? Are not you, in the presence of our Lord Jesus Christ at his coming?

Here is a good prayer...I hope you can read it. 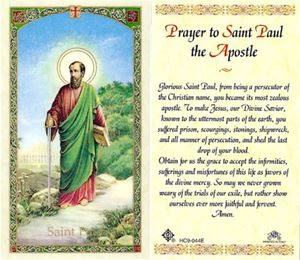