Part 44: DoC Series--St. Bernard of Claivaux: "They run quicker to death than we do to life"

Posted by Supertradmum
As those of you who read my blog know, St. Bernard of Clairvaux is my favourite saint. I discovered him when in a particularly Romantic period of my life was unfolding and he captured my imagination as well as my intellect. His words pierce into my soul, like arrows of love.

I hope in the next few days, when I cover this Cistercian giant, that I can honour him as he deserves, and that you, too, come to appreciate his holiness.

All his brothers and his sister,
(who I wrote about here http://supertradmum-etheldredasplace.blogspot.co.uk/2013/02/saints-of-february-continuedhumbeline.html ),
are Blesseds, as is his father. What an amazing family! Some of my notes on this section of the series were taken when I was in the monastery at Cobh.

Where does one start? With a picture, of course. Bernard was apparently considered a very handsome man in his day, as someone commented on at the time, but it is hard to see from the paintings. I assume his soul shone through his eyes. 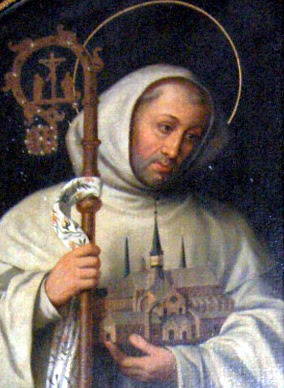 Let me start this section of the series with a few brief quotations:

Would, O brothers, that we were as desirous of spiritual goods as seculars are of temporal? We aught, indeed, to desire them more, by how much the more precious they are.  would that we might but equal them! for it is a great, a very great confusion to us to find that they desire pernicious things more ardently than we do things so beneficial. They run quicker to death than we do to life."