Posted by Supertradmum
Drawing to a close on this series, I want to highlight a few points from St. John of the Cross.
Some of this is repetition. 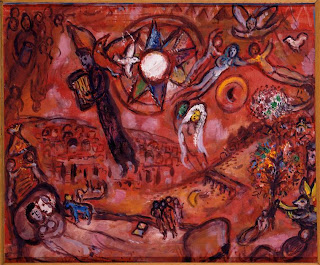 One, St. David, King, went through these states and into Union with God. His psalms reference the journey, as St. John so clearly notes. If we meditate on the Psalms, one of the points of using the Breviary, we join in that process.

Two, St. John refers to Aristotle, calling him The Philosopher, as does Aquinas. In one reference, John notes that Aristotle writes in Metaphysics that the clearer and brighter are Divine things, such as infused contemplation, the darker these things seem to the soul which has not been completely purified.
St. John also refers to St. Dionysius writing of this same light and dark observation.


One commentator notes that the root of infused contemplation is darkness but that it brings light. This is not necessarily a fast process. (Kavanaugh)

Only in Union is all light.

Three, the Dark Night of the Spirit brings the experience of love into the soul, mind, will and body which has undergone purgation.  If these faculties are purified, one experiences the power of the Holy Spirit, yet unknowingly, until the Illumination State, when the Catholic becomes a powerhouse of holiness, which spills out in obviously inspired work. Such was the enduring work of SS. Benedict, Dominic, Francis, and other founders of orders and great movements, notes Garrigou-Lagrange.

Four, Grace leads one into forgetfulness of self. But only one attachment, states St. John, only one, ruins the whole process and puts the liberty of the fruits of the Spirit on hold. One attachment interferes with the experience of the true love of God.

Five, St. John of the Cross and St. Bernard state the same thing, that the Bride must go out and seek the Bridegroom. She realizes finally that she was lost and not the Groom. The poem of St. John's on the Dark Night echoes the Song of Songs, and St. Bernard's sermons that the purged and humbled Bride must seek the Groom, correspond. This is our position in the Dark Night-seeking God Who is hidden until we can bear to see Him. Here is the passage from the Bible. Song of Songs, 3: 1-3; DR