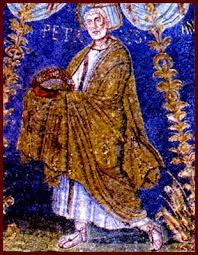 Offer your soul to God, make him an oblation of your fasting, so that your soul may be a pure offering

In one of his sermons, St. Peter Chrysologus reminds us that we have to become pure. Most of us are not yet pure, but this is the goal of prayer, fasting, almsgiving, mercy. Those who want to avoid purification simply will not see God without purgatory. Many complain online and in private that the Church is weak. It is weak because few want to be perfect, pure, without ego.

St. Peter Chrysologus knew his audience. Like us, his people were weary, Christ had not come as soon as people anticipated. They were slipping back into paganism, and those who were faithful were overcome by the evils of the ending of the Roman empire and chaos.

We are at the end of the American greatness and Europe as a culture and unit, which could only stand firm against evil if those EU nations kept the Catholic Faith. The Pope Emeritus stated this more than once.

"Those who divert themselves with the devil on earth, cannot rejoice with Christ in heaven.

If you are weary, ask God for strength. As St. Paul writes:

12 And therefore we also having so great a cloud of witnesses over our head, laying aside every weight and sin which surrounds us, let us run by patience to the fight proposed to us:


2 Looking on Jesus, the author and finisher of faith, who having joy set before him, endured the cross, despising the shame, and now sitteth on the right hand of the throne of God.


3 For think diligently upon him that endured such opposition from sinners against himself; that you be not wearied, fainting in your minds.


4 For you have not yet resisted unto blood, striving against sin:


5 And you have forgotten the consolation, which speaketh to you, as unto children, saying: My son, neglect not the discipline of the Lord; neither be thou wearied whilst thou art rebuked by him.


6 For whom the Lord loveth, he chastiseth; and he scourgeth every son whom he receiveth.


7 Persevere under discipline. God dealeth with you as with his sons; for what son is there, whom the father doth not correct?


8 But if you be without chastisement, whereof all are made partakers, then are you bastards, and not sons.


9 Moreover we have had fathers of our flesh, for instructors, and we reverenced them: shall we not much more obey the Father of spirits, and live?


10 And they indeed for a few days, according to their own pleasure, instructed us: but he, for our profit, that we might receive his sanctification.


11 Now all chastisement for the present indeed seemeth not to bring with it joy, but sorrow: but afterwards it will yield, to them that are exercised by it, the most peaceable fruit of justice.


12 Wherefore lift up the hands which hang down, and the feeble knees,


13 And make straight steps with your feet: that no one, halting, may go out of the way; but rather be healed.


14 Follow peace with all men, and holiness: without which no man shall see God.


15 Looking diligently, lest any man be wanting to the grace of God; lest any root of bitterness springing up do hinder, and by it many be defiled.


16 Lest there be any fornicator, or profane person, as Esau; who for one mess, sold his first birthright.


17 For know ye that afterwards, when he desired to inherit the benediction, he was rejected; for he found no place of repentance, although with tears he had sought it.


18 For you are not come to a mountain that might be touched, and a burning fire, and a whirlwind, and darkness, and storm,


19 And the sound of a trumpet, and the voice of words, which they that heard excused themselves, that the word might not be spoken to them:


20 For they did not endure that which was said: And if so much as a beast shall touch the mount, it shall be stoned.


21 And so terrible was that which was seen, Moses said: I am frighted, and tremble.


22 But you are come to mount Sion, and to the city of the living God, the heavenly Jerusalem, and to the company of many thousands of angels,

If you think we are not going into a time of tribulation, you have read my blog.

If you think we are not going to be persecuted, you are willingly ignorant.

We are all responsible for our own souls, and part of my salvation is to remind you that we are in a battle. St. Peter Chrysologus exhorted his own people to become perfect.

We cannot settle for less, or we injure our chances for heaven, as well as weakening the Church.