Mourning and Moving On

Some of my boxes of stuff are missing, including boxes of important and rare books.

Having to accept yet another loss is part of my life. I had first editions of Blessed Newman's works-all missing, as well as other rather rare books from England. What is most irritating is losing part of a set of things.

I am still missing a necessary document which I need immediately.


These missing things seem odd and not in sync with the storage facility, so I am assuming things went missing in the moving of these things.

No one is to blame for such things happen, like boxes left behind or even stealing, as we had happen twice to our stuff in the past, including rare editions of Aquinas and original David Jones artwork.

As my son says, "Life happens". But, God wants me to be more and more detached--this is part of the detachment.

When I stand before God in my particular judgement, I shall not have Newman's sermons in my hands, or anything, but my sins and hopefully, some merit.

But, losing things prepares us for death. Little deaths prepare us for big ones.

I have also lost some papers and things from my ancestors. Well, these events break one away from the past. If I were in the convent today, I would have none of these books which I am sorting out and sharing, or preparing to store here, where I am temporarily. God has foreseen from all times these happenings. And, as I have lost so much, these losses are merely more things to give to God.

One becomes attached to things because of memory, which God wants to purify. And, He also wants us to forget many things in the past in order to concentrate on Himself.

One becomes attached to things because they cost us something-like the first editions of Newman I am missing.

Or, one becomes attached to things because someone we love gave us such things. Again, we must become more and more detached from even those we love.

I mourn and move on, thus preparing my soul, memory, understanding, and will for a great attachment, that of being one with God Himself. Each loss creates space in the heart for God.

We give those who die to God and mourn and move on. The moving on is part of our spiritual growth, and God uses all events to give us an opportunity for receiving His grace.

Loss teaches me something about Christ. He shares in my sufferings, both large and small. He Himself allowed loss in His life on earth. We can hardly understand what His Incarnation actually means.

If I became an amoeba today, this event would not even compare with the Second Person of the Blessed Trinity becoming Man. I am reminded of this passage from Philippians.

5 For let this mind be in you, which was also in Christ Jesus:
6 Who being in the form of God, thought it not robbery to be equal with God:
7 But emptied himself, taking the form of a servant, being made in the likeness of men, and in habit found as a man.
8 He humbled himself, becoming obedient unto death, even to the death of the cross.
Why one has to experience loss in order to gain humility has to do with the fact that we always fall into the old habit of thinking we are immortal. We carry the desire for immortality in our psyches, because our First Parents would not have died if they had not sinned. So, we try and build immortality into our lives by accumulating things which comfort us on earth, like my first edition Newman's writings, which connect me with England, my son, my past, my personal history.
We cannot face death easily because it is unnatural to us, to our real personhood, as we were always as humans called by God to be in eternal bliss with Him from the first days in Eden. When I become more and more detached, I become more and more like Christ Himself, Who emptied Himself and accepted our lot as humans. His loss was voluntary, while my losses are not. Therefore, I considered my losses a grace in disguise, teaching me to look towards the Cross again and again, and remind myself of my mortality.
I have lost so many things including house, car, reputation, friends, family, career, comfort, privacy, status, money, security, country I love, living near my son, and even the ability to use my talents, such as teaching, that I have lost count of the times of stripping down to the basics.
Yet, I am free. God can, as He did with Habakkuk, pick me up and drop me anywhere. 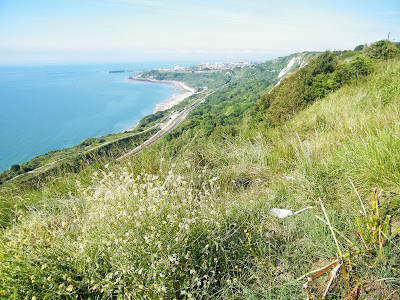 33 Now the prophet Habakkuk was in Judea; he had made a stew and had broken bread into a bowl, and was going into the field to take it to the reapers.34 But the angel of the Lord said to Habakkuk, “Take the food that you have to Babylon, to Daniel, in the lions’ den.” 35 Habakkuk said, “Sir, I have never seen Babylon, and I know nothing about the den.” 36 Then the angel of the Lord took him by the crown of his head and carried him by his hair; with the speed of the wind[a] he set him down in Babylon, right over the den.37 Then Habakkuk shouted, “Daniel, Daniel! Take the food that God has sent you.” 38 Daniel said, “You have remembered me, O God, and have not forsaken those who love you.” 39 So Daniel got up and ate. And the angel of God immediately returned Habakkuk to his own place.

Every time I move, I end up praying with people and giving spiritual direction about certain things. This seems to be how God is using me at this time. At least I can move by air and not by hair.

But, God is gentle with me, allowing me not to be loosened from everything at once, but in stages. This is like having a long time to die, rather than a short time. Those who lose everything in floods or tornadoes have faced far more suffering.

Each one of us has to learn that there is only one thing which matters and He is waiting for us to say this to Him.

God, you are my All.